16 days of Activism: Gender inequality at the root of violence against women

This opinion editorial was published in The Canberra Times on 21 November 2015, to start the conversation about meaningful action to end violence against women as part of our participation in the global campaign 16 Days of Activism Against Gender-Based Violence.

This year, we’ve heard a lot of public commentary on the shocking prevalence of violence against women in our community. We’ve seen significant action from our governments, heightened awareness in the media, and a broader acknowledgement that this is an issue that affects us all. 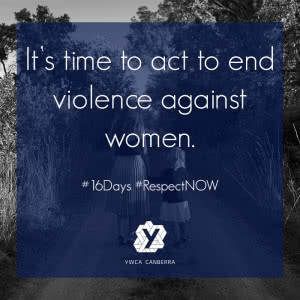 We’ve seen funding announcements at the federal and state and territory levels, and our Australian of the Year is a woman known for her bravery, integrity and resilience in the face of truly destructive domestic violence. Research has been released, and a Senate inquiry was conducted.

But it’s still not enough.

As reported by the Destroy the Joint Counting Dead Women researchers, 77 women have died as a result of violence this year. That’s more than one a week. And even if the number was smaller, even if it was halved, it would still be utterly unacceptable because no woman should ever have to die from violence at the hands of her former or current partner. It just shouldn’t happen.

This week ACT Policing​ have been sharing how many call-outs for family violence incidents they have responded to each day, and the numbers are astounding. Twenty-three over last weekend alone – that’s 23 women in danger, 23 families experiencing trauma.

The organisation I lead, YWCA Canberra, is committed to a world free from violence. Ultimately, until we address the root cause of violence – gender inequality – I believe we won’t see change.
This year we will be participating in the annual global campaign, 16 Days of Activism to End Gender-Based Violence.

Some of the facts we’ll be highlighting during this campaign are:

Gender equality needs to be instilled from an early age through our schools, and also through numerous other avenues, including the media, arts and culture, workplaces – in every part of society. We need long-term, adequately resourced primary prevention, backed up by appropriately funded crisis and support services and effective law enforcement.

I believe it is possible to see a future free from violence against women in Australia within the next generation. But key to achieving this and ending gender inequality is ensuring that women’s voices are heard, that women’s lived experiences are acknowledged, and that ultimately, women are given space to champion the issues that affect them most.

This 16 Days of Activism, I call on all Canberrans to actively listen to women. Seek out women who can share their experiences, read what you can online, ask the women you know about their views on gender equality and on preventing violence against women.

I know that ending gender inequality will eliminate violence against women, but it needs a whole-of-community approach and support from both men and women. The necessary first step is opening the door for women to advocate, educate and be heard.

For more information on all the activities for our 16 Days of Activism, including a planned Day of Action on the lawns of Parliament House, visit ywca-canberra.org.au.