The inaugural She Leads High Conference is a one-day leadership event for young women, including female identifying and non-binary people, in years 9 and 10. The event will take place at the University of Canberra’s Ann Harding Conference Centre on 28 November 2017. 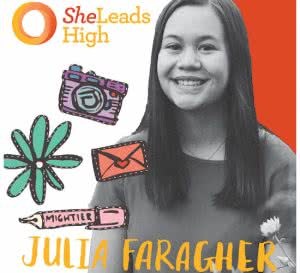 In this interview, we talk to Julia Faragher, one of our speed networkers at the upcoming High Conference. Julia Faragher is an Arts/Law student at the ANU and a freelance artist, specialising in writing, photography, film and design. She co-founded her own production company in 2011, Skybound Productions, which has since produced many short films that have screened at a variety of festivals. These include the Lights! Canberra! Action! Film Festival (2015  Winner – Best Student Film for her entry Dear Jasmine), All American High School Film Festival (2014 Finalist), and Tropfest Jr (2010 Final). She was a writer-in-residence at Feminartsy in 2016, is a three-time winner of Nanowrimo and currently works as a photographer for Bossy. She has been published by Feminartsy, Woroni, Cross-sections, Bossy, and Peppercorn.

I have always been fueled by a desire to create things and share them with the world. I realised that no one was going to make that happen for me.

Learning that there is no set path or set of steps that I need to follow in order to be successful. To get where I want to go, I have to follow my own instincts.

We need more women in leadership because you cannot be what you cannot see. Young girls are much more likely to see themselves in a future career if they have a role model who proves that it is even possible in the first place.

The best thing to do is read broadly. I have read so many books that have expanded my worldview and taught me valuable lessons about the world. In particular, I would recommend The Diary of a Young Girl by Anne Frank. A very well-known story, but Anne’s resilience, intelligence and hope for a world in its darkest days will never fail to inspire me.

When I was in primary school, I was terrified of going on school camp. My mother told me that I would be fine and to remember: “No one can ever make you do something that you don’t want to do.” That piece of advice has stuck with me over a decade later.