The inaugural She Leads High Conference is a one-day leadership event for young women, including female and non-binary people, in years 9 and 10. The event will take place at the University of Canberra’s Ann Harding Conference Centre on 28 November 2017. 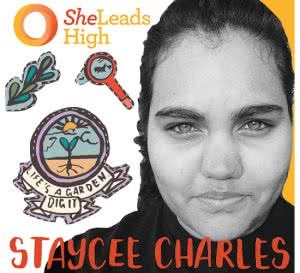 In this interview, we talk to Staycee Charles, one of our speed networkers at the upcoming High Conference. Staycee is a young Wemba Wemba, Baraba Baraba and Gunditjmara woman, who grew up in Deniliquin, NSW on Wemba Wemba and Baraba Baraba Country. Staycee is currently studying a Bachelor of Science in Psychology at the University of Canberra, and hopes to gain the qualifications to become a Forensic Psychologist.

It has given me the confidence that I never had during school. It’s been amazing connecting with different people and it has showed me that leadership starts off small.

My biggest leadership challenge would have to be being the ACT State Coordinator for Seed. It’s an internal battle of not wanting to let down my people and the Elders of the Ngunnawal Community. I am also constantly going through the imposter syndrome, where I second guess myself and tell myself that I am not ready for the role.

It’s important that we have women leaders; it shows that we have the strength and knowledge just as much as male leaders. We were made to go through life side by side. More women in leadership would show that we aren’t lesser humans bu that we each have our strengths and weaknesses. Men need to learn a thing or two from women in leadership. There wouldn’t be as many issues as there is now in the world.

Letters to my Daughter by Maya Angelou.

Never stop fighting for what you believe in. You are strong and intelligent, don’t let anyone tell you different.