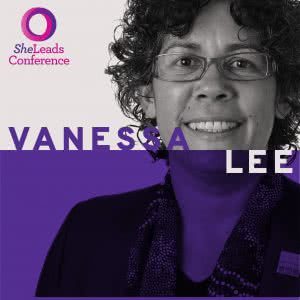 The 2018 She Leads Conference, happening 1 August 2018, brings together some of Australia’s biggest and brightest names from diverse industries and backgrounds to share practical advice and skills on learning to rise, lead, and take other women with you. One fantastic woman speaking at the Conference on the panel Leading and Lifting, is Dr Vanessa Lee.

Dr Vanessa Lee, from the Yupungathi and Meriam people, is a senior researcher in social epidemiology (Med. PBH) within the Faculty of Health Sciences at University of Sydney, an Honorary Associate of the National Centre for Cultural Competency, the Chair of Public Health Indigenous Leadership Education Network, a board director of Suicide Prevention Australia, and a founding member of Indigenous Data Sovereignty Network. Vanessa also works with Domestic Violence NSW LGBTIQ Interagency, providing cultural insight in addressing domestic violence issues within the First Nations sexuality and gender diverse community.

My biggest career accomplishment was firstly maintaining my cultural ways of doing, knowing and being, taught to me by my Grandmother, while obtaining my PhD in Medicine – Public Health; and to be able to translate my work into poetry, academic writing, media etc., and publish it. Secondly, using my qualifications coupled with my Aboriginal and Torres Strait Islander ways of doing, knowing and being to make change at a national level for the First Peoples of Australia, especially women and sexuality and gender diverse people.

My biggest personal achievement was to raise two culturally respectful young men, with the help of my Grandmother, who are now on their own career paths.

How would you define your leadership style?

I have a strong social justice ethos. My leadership style is centred on self-determination and autonomy.  What this means is that I lead holistically so that nobody gets left behind and people feel that they have a choice and a voice.

I feel it is important to lead in the very same way that you believe.

You’re a social epidemiologist; what does this involve?

I look at the social causes of the burden of disease for Aboriginal and Torres Strait Islander people. What this means is that I look at health outcomes, I then track backwards through the policy, and the data to the social cause. I then communicate what I have found to the various organisations responsible, and write and publish my findings.

Because social injustice is killing people, I believe that it is so important for all of us to contribute to making change in the world and for me it’s about combining health and art to demonstrate how the social, cultural and political determinants for Aboriginal and Torres Strait Islander people, specifically women, are not being met.

In short, my overarching focus addresses the social issues of the burden of disease to break the cycle of inequality that potentially lead to suicide in First Nations communities, and to strengthen the health and wellness of Aboriginal and Torres Strait Islander cultural identity particularly for women.

You studied on a scholarship from Griffith University for nine years as you raised your two sons and worked full-time. What was that experience like and how has it shaped your leadership journey?

In 2007, following the completion of my Master of Public Health at University of Queensland (UQ), I began studying and working full-time at Griffith University. I was successful in obtaining a scholarship from the then Department of Higher Education for 12 months in 2009.  It was time I spent developing the Aboriginal and Torres Strait Islander health pedagogy for the university and collecting and analysing my data for my PhD.

When I reflect on those years I wonder how did I do all that and raise my sons.  I won’t lie, it was hard. However, at the same time I was adamant on changing the colonial rhetoric placed on my people.  I spent a lot of time reading, listening, and watching anything I could get my hands on by people like Mary Martin, Patricia Dudgeon, Bronwyn Fredericks, Marcia Langton, Larissa Behrendt, Tom Calma and Ian Anderson.  Everywhere that I ran into them I had questions for them on ‘how did they do this or that’.  Because unbeknown to them, I was absorbing their leadership styles and when I stood up for social justice advocacy in parliament to defend my submissions or addressed various government departments, NGO’s, or the University, I would think about their styles so that I could communicate my arguments effectively and without prejudice and at the same time maintain respect for my culture.

One of your many roles involves providing cultural insight in addressing domestic violence issues within the First Nations sexuality and gender diverse community through the Domestic Violence NSW LGBTIQ Interagency. Why is this topic important?

Because the First Nations sexuality and gender diverse community are a minority within a minority and face a double glassed and sometimes triple glassed ceiling with some of the highest experiences of discrimination, physical and emotional abuse, sexual abuse, sexism, and racism.

Prior to colonisation, First Nations sexuality and gender diverse people had a place of responsibility within families and communities. My Grandmother once told me that if a male identified as sexuality and gender diverse at a young age, he would become privy to both initiations; the importance of this was due to tribal warfare. The impact of colonisation resulting in paternalistic policies and Christianity has reshaped a lot of our old ways of doing, knowing, and being, to the point that a lot of people now interpret religion as culture. This interpretation has not only disrupted Indigenous ways of doing, knowing, and being, but it has also created a degree of homophobia that is contributing young people’s suicides.

Another role you undertake is as a Board Director for Suicide Prevention Australia. In terms of action, what steps can we all take to be leaders of prevention?

We need to have compassion for each other and integrity in our actions. Because nobody knows what somebody else is going through or what has happened in their life to bring them to a decision that they have made today.

It’s important to understand what others are going through, how they feel, what it’s like to live with it, so you can help people both on an individual basis and a policy basis. Aboriginal and Torres Strait Islander people have one of the highest suicide rates in the world and we know that focusing on prevention means that culture needs to be included in treatment, so non-Indigenous folk need to be culturally competent and communities (and community controlled organisation) need to be involved in the service delivery.

In this network we advocate to the Public Health Schools in various institutions to implement the Aboriginal and Torres Strait Islander core competencies into their curriculum. It is a means of advocating for the social, cultural, and political determinants of the First People of Australia. It was the likes of women such as Catherine Bennet, Jenny Baker, and Priscilla Robinson who taught me to advocate in public health curriculum.  As the chair for this Network, I have in-turn been able to guide other women on their leadership journeys.

I think that more needs to be done to give young Aboriginal and Torres Strait Islander people educational choices, and foremost, the narrative needs to change. As gone are the days when Indigenous people were viewed as primitive beings, Aboriginal and Torres Strait Islander people are intelligent people who have survived for tens of thousands of years on a country that we all call Australia and all young people should be rejoicing in this knowledge within all areas of the curriculum. The failure to deny young people their cultural identity leads to discrimination and can lead to suicide.

In thinking about creating structural change, what do you feel must happen to ensure that all women, particularly those from diverse and marginalised communities, are able to reach equality and thrive?

When I asked my 19 year old son this question he replied, “women aren’t the problem Mum, men are.  They basically need to pull their heads out of their butts and stop treating women inequitably.” I grinned and said, “my job here is done”.

This alone tells me that Aboriginal and Torres Strait Islander women need to be included in discussions that concern them. As stated in the Redfern Statement, ‘we know the answers’. This can be said for all diverse and marginalised women because at the end of the day it’s about having the choice to make decisions about our own lives and not being oppressed when we try to get out voices heard.

I believe that communication, compassion, and respect for one’s self and for others is the key to maintain the bond of sisterhood between women. It’s important to acknowledge other women’s worth and give praise where praise is due, and be genuinely kind and unafraid to speak up in support of other women is also really important.

I participate in different community initiatives that support women and often I will be the first voice and the last voice to bring home the voice of my sisters so that they can be recognised for their initiatives to make change. At a national level or a community level – it’s about having that same integrity and boundaries of respect that you expect other women to have towards you.

In all my leadership roles I continuously support and nominate other women for their expertise, and when they think that they can’t do it I will try and show them a strategy and a way to for them to share their knowledge.  Sometimes I will quietly open a door so another sister can walk through and she can grow in her own right.

We don’t have a language word for mentor and our definition is much more relaxed. In saying that, there has not been one single person but rather there has been a combination, such as Mary Martin who was proactive in helping me connect with communities in South East Queensland for my research, Bronwyn Fredericks and Ian Anderson who nominated (and supported) me in the Vice President role of the PHAA and the PHILE Network, and Tom Calma and Patricia Dudgeon who endorse me as a Director for Suicide Prevention.

In all of these positions I have had one goal, and that is for Aboriginal and Torres Strait Islander people, particularly women, to live self-determining lives as it is our human right.

To hear more from Dr Vanessa Lee register to attend the 2018 She Leads Conference today. Early bird tickets start from just $350 with the sale ending 30 June, and discounted tables of 10 are also available. Stay up to date with all She Leads news by following our Facebook and Twitter pages, and subscribing to the monthly She Leads Newsletter. You can also join as a member to receive discounts on future events and other opportunities.