The She Leads In-Conversation Series provides Canberrans with the opportunity to hear from women leaders from different backgrounds and industries in a conversational format, followed by a live Q&A session, networking, and canapes. Our February In-Conversation event will feature Nayuka Gorrie and Laura Burr, centering around the challenges faced by young women and Aboriginal and Torres Strait Islander women alike, in our communities, society, and workplaces. 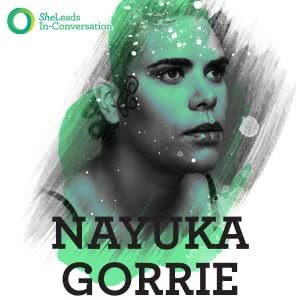 I don’t particularly consider myself a leader. I’ve always been surrounded by deadly black femmes and women and have been utterly inspired by them, whether grandmothers, aunties, cousins, sisters and Mum. A few years ago I decided to be honest even when it was hard and not pander to white supremacy and patriarchy.

I think leadership discourse and the way that people expect Aboriginal people to be leaders is a bit of a scourge. Western ideas of leaders are those that are loudest and often they are not necessarily the smartest nor accountable to their community or communities. Colonisation tried on divide and conquer tactics to control us and this tactic plays out today and is destructive.

Beyond women as leaders I think we need to reimagine the world. I don’t see the point in having the same oppressive structures (created by and for patriarchy and white supremacy) with women in charge. I think seeing my mother as a police officer has informed my views on this. She was an efficient and effective police officer but an institution built by and for white men can’t benefit black people. It doesn’t matter how many women of black people are police, the structure itself needs to radically change.

Never hope harder than you work.

You can hear more from Nayuka Gorrie and Laura Burr at the She Leads In-Conversation on Tuesday 13 February – secure your ticket online today!

One response to “5 quick questions with Nayuka Gorrie”