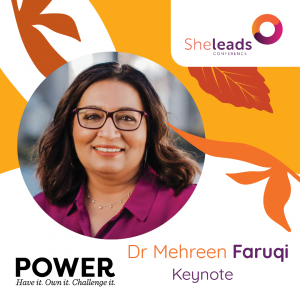 The She Leads Conference is back! This time it’s being held at Kambri at the ANU on Friday 23 July.  The She Lead Conference is our biggest leadership event of the year, providing emerging and established women and non-binary leaders with the opportunity to develop their practical skills, knowledge and networks to accelerate their leadership journey. This year’s Conference theme is POWER! What it’s like to have it, own it, and challenge it.

In celebration of the upcoming event, we sat down with one of keynote speakers, Dr Mehreen Faruqi to talk with her about leadership, the gender pay gap and what makes her feel POWERFUL!

Dr Mehreen Faruqi is the Greens’ senator for New South Wales. She is a civil and environmental engineer and life-long activist for social and environmental justice. Since emigrating from Pakistan in 1992 and completing her doctorate at the University of New South Wales, Mehreen has worked in leadership positions for local government, consulting firms and as an academic in Australia and internationally. In 2013, she joined NSW State Parliament, becoming the first Muslim woman to sit in an Australian parliament. In 2018, Mehreen was the 100th woman to join the federal Senate where she holds the anti-racism, animal welfare, education, housing, international development and industry portfolios for the Australian Greens.

In 2021, Mehreen released her first book Too Migrant, Too Muslim, Too Loud, a memoir detailing her experience becoming the first Muslim women in the Australian Parliament.

I’m a lifelong feminist activist for social and environmental justice. It’s always been my job to tell it like it is. Right now, I’m Greens Senator for NSW.

Tell us about a moment in your life that kick started your leadership journey.

When I was growing up in Lahore, I wanted to play cricket in the street with the boys but wasn’t allowed. The arguments that followed might have been the first fight for equality that I jumped into headlong and won. There have been a lot more since, but the principle of demanding the right thing until people listen hasn’t changed.

What questions are you tired of hearing about gender equality?

It’s exhausting hearing the insidious question, “isn’t there only a gender pay gap because women take time off or choose to work in lower paid jobs?” There’s really no excuse for ignoring the society-wide devaluing of feminised industries and caring work, just as there’s no excuse for thinking that people “choose” their circumstances and the pressures of the patriarchy.

I get the same feeling when people say “You’re in Parliament. Isn’t that proof gender equality isn’t a problem anymore?”, ignoring the fact it took I joined NSW Parliament in 2013 for a Muslim women to sit in any Australian Parliament, not to mention that politics still looks nothing like our streets and suburbs.

Finally, I’m so tired of the accusatory question, “Why do you make everything about gender and race?”. As if racism and patriarchy doesn’t shape every living day of the majority of the population. As if our issues aren’t sidelined so often that we have any choice but to vehemently insist intersectional issues be put front and centre, exactly where they should be.

What is something you do that makes you feel powerful?

When I’m on the streets, rallying alongside thousands of others, I feel just how powerful people can be together. I draw such strength from those moments.

I’m honestly a little suspicious of the idea that we could—or should want to—ever attain enough individual power to overcome misogyny and racism. Our struggles are collective. So too must be the strength that will overcome them.

Imagine yourself in fifteen years. What leadership advice would your older self give to you right now?

Mehreen of 2036 would probably be giving the same advice I’ve always tried to give myself: feel the fear and do it anyway.

Our She Leads Conference is SOLD OUT! If you would like to hear more from Mehreen, get in touch by emailing sheleads@ywca-canberra.org.au to be added to our waitlist.

Scholarships are still available. Check out our event page for more information and to apply.