A lesson learned is a lesson earned towards equality 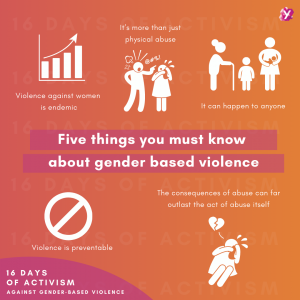 For many people, gender-based violence is a difficult issue to understand. It’s complex, emotional and at times overwhelming. But just because something is overwhelming, that shouldn’t discourage you from wanting to learn more about it and make a personal effort to help solve it.

At YWCA Canberra, we are fortunate to work alongside some of the most knowledgeable and passionate women and advocates for gender equality. They inspire many to stand up for gender equality, and to approach issues of equality in a more nuanced and intersectional way.

This 16 Days of Activism, we want to share with you five immediate lessons about gender-based violence and to remind you that it’s never too late to learn more about this issue.

Violence against women is endemic

It’s no secret that violence is one of the most pervasive and dangerous human rights issues around the world today. While research shows that violence impacts one in every three women globally, it is a problem that many people in Australia can overlook within our own country and communities.

Whether you are aware of it or not, violence against women in Australia is endemic, so much so that on average, one woman a week is killed at the hands of a domestic or intimate partner or former partner. While this statistic is disturbing, another alarming fact is that even more women deal with this problem alone and in secret.

Often when people think of violence against women, they immediately think of physical or sexual abuse. While these are two very important forms of violence against women, they are not the only forms. Violence can present itself in many different ways. Some may not be as obvious as others but can be just as dangerous. They can have profound effects on women even when there are no physical signs.

Violence can take the form of emotional abuse, financial abuse, spiritual abuse, social abuse and even digital abuse. Many women who are subjected to violence in these diverse forms often don’t even realise that it is violence. This can make it difficult to identify the problem, and even harder to seek help in times they may need it.

It can happen to anyone

A common misconception about gender-based violence is that it only occurs in underdeveloped countries, among people of lower socioeconomic status, or by a stranger. While there are many factors that can exacerbate the issue, it’s important to understand that violence can affect anyone, irrespective of their age, gender, ethnicity, or socioeconomic status.

One of the most disturbing facts about gender-based violence is that it is commonly committed by family members and domestic or intimate partners. This relationship dynamic can often blur the line for what people consider to be consent and can create a myriad of issues for women who experience abuse in the home and whose experiences are invalidated because they are in a relationship with their abuser.

In addition to the abuse itself, victims of abuse can often experience trauma long after the violence is committed. Some common consequences of abuse include low self-esteem, trust issues, insomnia, physical and mental health issues and financial turmoil.

Under these conditions, women who have been subjected to violence are more susceptible to poverty, homelessness, health complications and reduced quality of life.

This is perhaps the most important of all – violence against women is preventable. While it’s important to invest in responding to violence by supporting victims/survivors and holding people who use violence to account, one of the most effective ways to stop the spread of violence is to address it at its source.

This can be achieved by changing the social conditions in which gender inequality thrives and implementing change through primary prevention initiatives across the whole society. This can include teaching respectful relationships education in schools, teaching young people about the importance of consent, calling out inappropriate behaviour if you see it and educating yourself on the signs of violence and abuse.

Want to see more of 16 Days of Activism? Be sure to check out our other blog posts here or watch our digital interviews.

Follow the hashtag #16Days to see what other organisations around the world are to help fight against gender-based violence.