On Friday night I was fortunate enough to volunteer at our fourth annual LGBTQIA+ & Allies Prom. Having only joined YWCA Canberra in September, this was an event I’d heard so much about and was keen to see for myself. 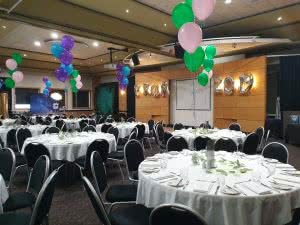 The Prom, run by YWCA Canberra’s Youth Engagement team, is an opportunity for LGBTQIA+ people aged 12 to 25 to experience a formal style event and express their identity in a safe, supportive, and non-judgmental environment. But it is also so much more than that: it’s a joyful expression of acceptance for a group of young people who know all too well that not all segments of society accept them.

The crowds started well before the 6.30 registration time, with incredible gowns, suits, and costumes along the night’s theme of ‘a night in the forest’. The young people were so excited, the parents a bit nervous, and us volunteers somewhat overwhelmed by just how many people were there early! We ended up with about 200 young people through the doors, filling the Ainslie Football Club’s function area.

As soon as the night started, the crowds poured in and the dancing began. I will never forget the goosebumps I got seeing about one hundred young people belting out ‘Let it go’, knowing that it meant so much more to these young people than those who haven’t faced challenges based on their gender or sexuality.

We were fortunate enough to see two incredible performers by young LGBTQIA+ people: a beautiful dance piece and some vogueing—I had no idea the human body could move that way!

And for the second year we had the LGBTQIA+ & Allies Prom Awards, recognising six exceptional young people for their contributions to our community.

The joy in the room was palpable, with so many young people commenting on how freeing it was to be able to truly be themselves for a night, to know they will be respected for who they are. Many had been in previous years and planned to keep coming until they were over 25.

I must have gotten something in my eyes at some point though, because I just kept tearing up…