A week to uncover hidden poverty in Canberra

Anti-Poverty Week is a chance for the community to highlight issues of poverty and inequality, and to come together to seek meaningful solutions to addressing these challenges. This year’s theme was dedicated to hidden forms of poverty.

Through a series of events across the city, participating organisations explored the often insidious and invisible ways that poverty and inequality impacts our community. 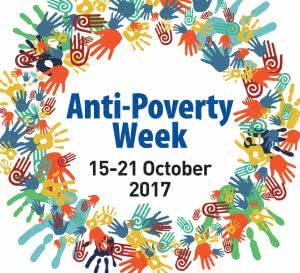 It can be easy to forget in an affluent and vibrant city like ours, that this challenge is a reality for many Canberrans. Thousands of Canberrans are experiencing inequality, multiple forms of disadvantage, and are excluded from participating in society:

Canberra is often regarded as a prosperous city, performing well against most metrics. However, this marks the significant disadvantage experienced in the ACT. Food insecurity is increasingly a marker of such disadvantage, particularly impacting already vulnerable groups.

We decided to make this the central theme of our two 2017 Anti-Poverty Week events. Through our 2017 Anti-Poverty Week Event Kit, we encouraged people to bring their friends, family and colleagues together for a morning or afternoon tea, and bring a plate to share worth five dollars or less. We invited them to start a conversation about how we can all work together to create a more equitable and prosperous community for all.

We also held an event at our Mura Lanyon Youth and Community Centre through the Lanyon Food Hub. The Lanyon Pantry Dash aimed to demonstrate the creativity and thought required to create a nutritious meal on a limited budget, and as a result, demonstrate that poverty can negatively impact food choices and ultimately the health of our communities. School students from Lanyon High were joined by MLAs Mick Gentleman, Nicole Lawder, Mark Parton and Andrew Wall to serve Lanyon Food Hub clients a free nutritious breakfast, using our on-site pantry items.

Another important event that was held during the week was the Hidden Poverty Panel Breakfast event, for which we joined forces to co-host with Marymead.

Prepared by the National Centre for Social and Economic Modelling (NATSEM) at the University of Canberra, the report, Hidden disadvantage in the ACT: Report for ACT Anti-Poverty Week uses the latest 2016 Census data to highlight pockets of poverty in the ACT, and focuses on small areas that have an average population of about 400 people.

One of the most concerning findings in the report is the number of small areas in the ACT experiencing multiple forums of disadvantage.  This report shows that in 2016, over 37,000 Canberrans were living in households with an equivalised annual income under $26,000, including almost 8,000 children.

Our Executive Director and Co-Chair of the ACT Anti-Poverty Week Committee, Frances Crimmins said, “This report builds on the evidence-base that shows we need to address a range of access and equity issues for Canberra’s most vulnerable people.

“This includes providing appropriate and affordable housing, quality education from the early years through to college, and to ensure all young people have access to skills and resources to equip them for the jobs of the future.”

ACTCOSS Director, Ms Susan Helyar said, “ACTCOSS knows that it takes astute and vigilant household budget management to cope on a very low income. But even with that, many households are unable to keep a roof over their head, food on the table, heat their home, and keep a car on the road, as well as buy medicine when it is needed.”

Chief Executive Officer of Marymead, and Co-Chair of the ACT Anti-Poverty Week Committee, Camilla Rowland said, “The report also highlights the fact that in the ACT we have lower levels of disadvantage than other jurisdictions in Australia. However, it’s important to recognise that the ‘salt and peppering’ of public housing in the ACT masks the needs of the people who are most vulnerable in our communities.”

All in all, Anti-Poverty Week was a thought-provoking and challenging look at poverty in our community.

Want to help? Sign up to our advocacy publication YAction, enews, or become a YWCA Canberra member to stay in the loop of upcoming opportunities. You can also find us on Facebook, Twitter and Instagram.