YWCA Canberra strives to be an innovative service leader, and we have been fortunate to win the following awards: 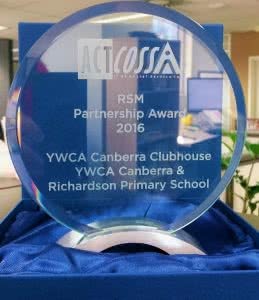 We were thrilled when the YWCA Canberra Clubhouse was recognised for its success in outcomes, and impact on the community with a 2016 Community Sector Partnership award from ACTCOSS.
The YWCA Canberra Clubhouse is an innovative, creative, out-of-school learning space where young people from underserved communities can work with adult mentors to develop new skills, explore their own ideas, and build confidence in themselves through the use of technology.
This award acknowledges the collaboration between YWCA Canberra, Richardson Primary School, Clubhouse mentors and corporate partners, and the important outcomes this partnership has produced for young people in the Tuggeranong region.

The YWCA Canberra Winyu Early Childhood Service was announced as one of four national finalists in the 2016 HESTA Early Childhood Education and Care awards, in the Excellence in Building Inclusion category.

This achievement recognises the multifaceted, whole-of-team approach taken at Winyu to develop and implement strategies to remove barriers to accessing early childhood education and care, as well as their targeted effort towards improving outcomes for children and the local community. 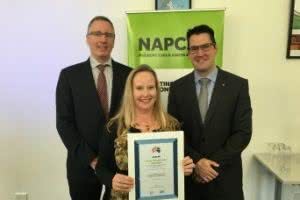 We were proud to receive a 2016 NAPCAN Play Your Part award in recognition of our partnership with several other local government and community organisations to form the Child Aware Local Initiative (CALI) project in South Tuggeranong.

The CALI project plays an important role in supporting families and their children, connecting them to a range of important services and improving the development and wellbeing of children in the region overall.

The NAPCAN Play Your Part awards recognise initiatives that promote the safety and wellbeing of children and young people across Australia. 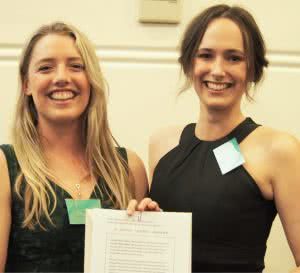 YWCA Canberra Board Director and Founder of Cooking Circles, Heidi Zajac, and co-founders of womenCANplay, Hannah Massingham and Billi McCarthy-Price, were honoured to receive Edna Ryan awards in October 2016, recognising their contribution to the ongoing journey towards equality for women.

Both Cooking Circles and womenCANplay were started with support from YWCA Canberra’s Great Ydeas Small Grants program in 2015.

The Edna Ryan awards recognise women from NSW and the ACT who have made a feminist difference across ten categories, from community activism, to mentoring, to sport.

Heidi received a Community Activism award for making a feminist difference in the community through Cooking Circles, which brings women together to share culture, stories and recipes, and cook and eat together.

Hannah and Billi received a joint Sport award, for their work to increase women’s participation in sport across the ACT.

In 2015, YWCA Canberra Executive Director, Frances Crimmins and former Board Director, Betty Ferguson, received Edna Ryan Awards for their service to advancing the status of women in the ACT.

You can find out more about the Edna Ryan awards here.

The AIM Leadership Excellence awards are the peak national awards program that recognise and celebrate Australia’s most outstanding leaders.

Frances took out the ACT Leader/Manager of the Year award for innovation, strategic thinking and visionary leadership. The award is also a distinguished acknowledgement of her passionate advocacy for gender equality, and a recognition of her unique skills and ability to provide leadership opportunities for women in the ACT.

YWCA Canberra’s Early Childhood Services Manager, Louise Billman, and O’Connor School Age Care Program Manager, Vikki Marden both received an ACT Children’s Week award at a ceremony held in October 2016.
These awards are an acknowledgement of their exceptional approach to providing education and care for the Canberra community.

The Youth Coalition of the ACT’s YOGIE awards recognise, celebrate, promote and reward outstanding practice in working with young people in the ACT.

YWCA Canberra’s Youth Engagement team received a Certificate of Commendation in the Innovation in Service Delivery, recognising the important outcomes achieved by the LGBTQIA+ and Allies Prom event that was held in September 2016.

The LGBTQIA+ and Allies Prom provided the opportunity for 78 young people aged 12-25 years who identify as sexuality and gender diverse, and their allies, to come together in a safe and inclusive space, and form connections with their peers and a range of ACT organisations.

You can read more about the LGBTQIA+ and Allies Prom on our blog.

In December 2015, YWCA Canberra was honoured with two Yogie Awards by the Youth Coalition of the ACT. These awards recognise outstanding practice working with young people in the ACT and surrounding area.

The YWCA Computer Clubhouse was recognised with an Innovation in Practice Award. The  Clubhouse is a creative out-of-school learning space that provides young people with access to high tech digital tools, cutting edge technology and industry mentors. It allows its members to explore science, technology, engineering and mathematics fields, nurturing and developing technical skills and interests. One Clubhouse members has remarked that “the Clubhouse is really cool because you get to do new things everyday”.

The Outstanding Contribution to Young People Award was awarded to   Natasha Drumgold, a Youth Engagement Officer with YWCA Canberra. Natasha is an unwavering champion of the young people with whom she works. She has been a positive influence in the lives of hundreds of young people in Woden and Tuggeranong, through a range of youth engagement programs but, in particular, Y-Aspire, a program for girls.

Children’s Week Awards acknowledge individuals and organisations that have made a difference for children and young people. The Child Aware Local Initiative (CALI) focusses on early intervention and connecting children and their families to community services with the overall objective of keeping children safe and well. As lead agency of this innovative initiative, YWCA Canberra has led CALI with no direct funding in collaboration with the Tuggeranong Child & Family Centre, The Smith Family, PCYC and local schools.

The initiative helps vulnerable and socially isolated children and their families to form stronger connections to early childhood education and care, school, health and other support services.

CALI was part of the National Framework for Protecting Australia’s Children 2009 – 2020, Australia’s first national plan to address child abuse and neglect, and was supported by Families Australia and the Australian Centre for Child Protection.

Find out more in our media release.

Two incredible YWCA Canberra leaders were honoured with Edna Awards in October 2015, recognising their contribution to the ongoing journey towards equality for women.

Executive Director, Frances Crimmins, and valued member, volunteer and former Board Director, Betty Ferguson, received Edna Ryan Awards for their service to advancing the status of women in the ACT.

The awards were created in 1998 in honour of Edna Ryan, who fought for equal wages and conditions for Australian women for over 30 years. The awards recognise women from NSW and the ACT who have made a feminist difference, whether it is in the community, workforce, arts, government or sport.

Frances, who is passionate about gender equality, was recognised for her leadership and advocacy on behalf of Canberra women and girls.  Under her leadership, YWCA Canberra has twice achieved the Employer of Choice for Gender Equality citation from the Workplace Gender Equality Agency (WGEA).  She was also recently named a Gender Pay Equity Ambassador by WGEA.

Betty has a long history in improving the status of women through her extensive involvement with the YWCA movement. Following a successful career in IT, accounting and public administration, Betty applied her financial and management expertise to mentor and train other women. She has led financial workshops for YWCA Canberra for nine years, and served as Treasurer on its Board in 2009, 2010, 2011, 2013 and 2014. As Treasurer, Ms Ferguson significantly contributed to YWCA Canberra’s future financial sustainability through her development of a comprehensive investment policy.

Find out more about the Edna Awards, or read our media release. 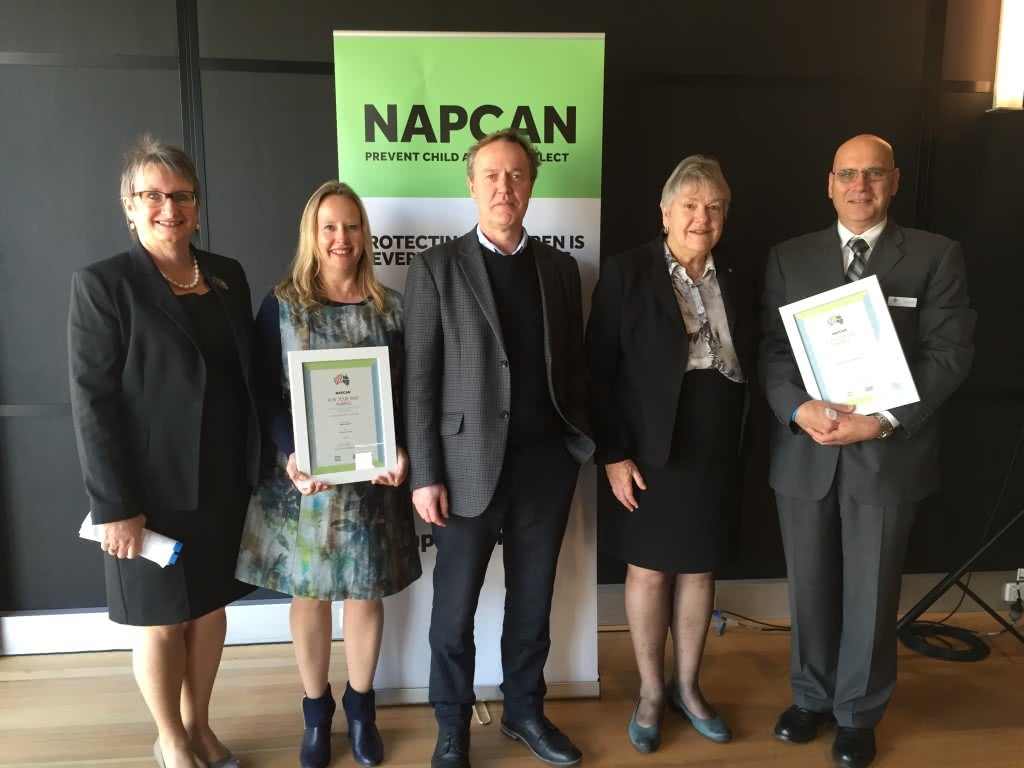 In September 2015, we were delighted to be awarded a Play Your Part award by NAPCAN for our Relationship Things program.

Relationship Things is part of the broader work YWCA Canberra does around primary prevention of violence against women and children, which also includes our program Respect, Communicate, Choose.

The Play Your Part Awards recognise organisations, individuals and communities that play their part to promote the safety and wellbeing of children and young people, through inspiring, community led, evidenced based initiatives.

Congratulations to the other 2015 recipients for their work in keeping our children and young people safe.

Find out more about our NAPCAN Play Your Part award.

In December 2014, YWCA Canberra was thrilled when Relationship Things received a prestigious Partners In Prevention Community Award from the ACT Office for Women.

The annual awards recognise best practice strategies and activities that create awareness of gendered violence in order to prevent violence and sexual assault against women and children in the ACT.

Relationship Things empowers young people to develop and maintain safe and respectful relationships. It challenges stereotypes that support gender inequality, which leads to violence against women.

Find out more about Relationship Things, or read our media release or blog post.

In 2014, one of our Family Day Care educators, LiXui (Amy) Mann was honoured with this award.

The ACT Education and Care Gala Awards are the pre-eminent awards for the children’s services sector in the ACT, and are delivered by the ACT Professional Support Coordinator and Communities@Work.

Read more about Amy and her achievements in this blog post, or find out more about our Family Day Care.

Y-Aspire is an early intervention leadership program to support young women in years 7 and 8 of high school who are at risk of disengaging with education. The strengths-based program aims to build skills and confidence that will assist girls in their journey through high school and beyond.

The program addresses the issues of identity, personal skills and skill building, body confidence, respectful relationships and career pathways. It focuses on helping young women build a strong connection to schooling through an integrated learning program. It allows girls a gender-exclusive safe space to explore issues relevant to their journey towards womanhood.

Y-Aspire uses a combination of interactive activities and discussions. It builds skills and confidence, supports participants to identify and achieve their goals, encourages girls to engage in activities that create greater awareness of who they are, encourages future aspirations, and promotes questioning of norms and expectations that may conflict with their aspirations.

Find out more about Y-Aspire, or  read our blog post.

YWCA Canberra’s Tuggeranong Literacy Project was recognised for its success in outcomes, and impact on the community with a 2014 Community Sector Partnership award from ACTCOSS.

The Project has run for three successful years. The original project was a pilot program run in 2012 in partnership with YWCA Canberra’s Mura Lanyon Youth and Community Centre, Lanyon High School and U Can Read, University of Canberra.

The specific aims of the project are to:

Ten year 7 and 8 students from Lanyon High School participated in a 20 week program twice a week for two hours. During these sessions the students received one–to-one assistance from trained reading tutors, completed literacy tasks set by teachers and worked on their own creative writing projects.

We are excited to see this innovative program recognised by ACTCOSS with a Community Sector Partnership Award, and look forward to continuing to provide literacy support to students to improve their long-term education outcomes

Read more about the Tuggeranong Literacy Project, or read our blog post.