Ms Liddle is an Arrernte woman living in Melbourne. She is the current National Indigenous Organiser for the National Tertiary Education Union (NTEU). Ms Liddle blogs personally at Rantings of an Aboriginal Feminist and is particularly interested in education, politics, and the arts. 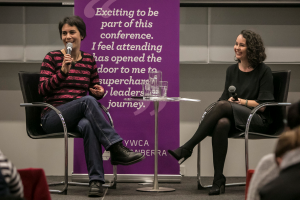 Ms Burr opened the evening with an acknowledgment of Country, and then invited Executive Director Frances Crimmins to officially open the event. Ms Crimmins also acknowledged Country, further adding “I would also like to pay my respects to the Aboriginal and Torres Strait Islander women who have been custodians of culture for generations, and continue to contribute to our culture today.”

Ms Burr and the excited crowd of more than 115 Canberrans then gave a warm welcome to Celeste Liddle as she entered the stage.

Ms Liddle began the evening by discussing First Nations Feminism and intersectionality. Ms Liddle stated that she has “loudly and proudly identified as a feminist since I was 16”, however, her identification with feminism has been shaped by early experiences of racism and being “othered”.

This experience of being othered led Ms Liddle to intersectional feminism and unionism, as her understanding of the hegemonic systems of colonial and racist oppression that persist today against Aboriginal and Torres Strait Islander people pushed her to seek justice and create platforms for self-expression and sovereignty.

However, Ms Liddle is also critical of intersectional feminism, stating that while in theory intersectionality works to understand the multitude of layers of oppression and discrimination faced by all women, the intersectional space can often come across as tokenistic towards women of colour.

To counter this, Ms Liddle argues that all feminists must not only create a permanent space for women of colour and actively listen to their voices, but intersectional feminists must also understand that one Aboriginal and/or Torres Strait Islander person does not speak for the entire community.

Ms Liddle also spoke passionately about the contribution Aboriginal and Torres Strait Islander women have made and continue to make to their own communities and Australian society, and she highlighted how their knowledges are the longest continuing knowledge bases in human history. 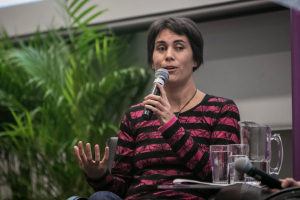 Further, Ms Liddle argued that the knowledges of Aboriginal and Torres Strait Islander people are often considered as secondary to knowledges based around white, western-centric, and patriarchal systems, which are favoured within Australia education systems. The lack of inclusive and diverse knowledge education, Ms Liddle states, then leads to ignorance, intolerance, racism, and significantly disproportionate rates of high incarceration and suicide rates, poor health, and premature death.

Ms Liddle then discussed at length issues of prejudice and racism in Australian society, conferring that while many Australians are quick to point out racism overseas, they are reluctant to acknowledge the colonisation of Australia built on Terra Nullius. Ms Liddle encourages allies to recognise this history and its continuing injustices, and begin to critically dismantle the fake truths that permeate society. Ms Liddle says that these mainstream prejudiced views “are literally killing us” and “unless we get a lot more truth telling, we’re not going to get anywhere.”

Ms Liddle concluded the conversation by discussing the continued strength of the Aboriginal and Torres Strait Islander community, particularly in the face of ongoing oppression and persecution, and encouraged all Australians to work in solidarity to celebrate and respect culture and the right of all individuals to self-determination.

We hope that attendees left the event with renewed motivation to strive for equality in Australian society, and to acknowledge and highlight the voices of Aboriginal and Torres Strait Islander women.

The next She Leads In-Conversation is happening on Wednesday 22 November with Virginia Haussegger and Jane Alver. To receive updates about this upcoming In-Conversation, and future She Leads events, follow us on Facebook and twitter, and subscribe to our She Leads Newsletter.