2016 Election Platform – Every woman, every child, every day 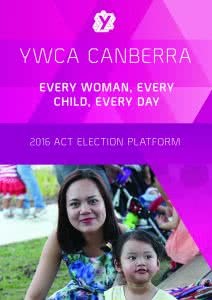 2016 was an ACT Election year, and YWCA Canberra wanted to ensure that all candidates seeking election or re-election to the ACT Legislative Assembly were committed to creating an equal, inclusive Canberra.

We launched our election advocacy platform, Every woman, every child, every day, calling on the next ACT Government to prioritise gender equality, support for children and young people and community inclusion over the coming three years.

We  outlined 20 key areas for action, with practical, meaningful solutions that can be implemented to address areas of inequity in Canberra through effective policy change and additional support.

The election platform was a call to action – we wanted to see a commitment from those who seek to lead this city, to ensuring that equality, community inclusion, and support for vulnerable members of our community are priorities for the coming three years.

Download: YWCA Canberra – Every Woman, every child, every day – 2016

YWCA Canberra identified three key priority areas in Every woman, every child, every day, which require ongoing and meaningful action:

To ensure a stable, prosperous, and equitable ACT, creating equal opportunities for children and young people must be a policy priority. The ACT Government has a vital role to play in ensuring all our children and young people – particularly those who are most vulnerable or at risk – have the safety, support and sense of belonging they need to learn, work, engage and have a voice in our community.

Gender inequality is inextricably linked to domestic violence, and both require a whole-of-government response to achieve long-lasting change. While the ACT has made significant inroads into reducing gender inequalities, major gaps remain.

Priority three: Make community inclusion and equality a priority for the ACT

Despite enjoying one of the lowest levels of overall disadvantage in Australia, the ACT also has one of the highest proportions of highly socio-economically diverse neighbourhoods, with large numbers of both the most and the least disadvantaged individuals living side by side. If we measure equality according to the ratio of the highest incomes and lowest incomes within a jurisdiction, we find that the ACT has the highest rate of inequality compared to any other state or territory.

Overcoming inequality and promoting community inclusion must be a core priority of the ACT Government. YWCA Canberra acknowledges that in a tight fiscal environment, the prudent and efficient use of government resources is necessary to maintain a strong economy and sustainable service system. However, it is imperative that support is maintained and enhanced for those who are most vulnerable.

We should be striving for greater equality and social inclusion across the ACT. This will not only benefit the marginalised members of our society, but increase community wellbeing as a whole.