Anti-Poverty Week 2018: highlighting the importance of pathways out of poverty

Anti-Poverty Week is held nationally between October 14 and 20. Anti-Poverty Week aims to strengthen public understanding of the causes and consequences of poverty and to encourage discussion and action to create pathways out of poverty with the help of individuals, communities, organisations and government 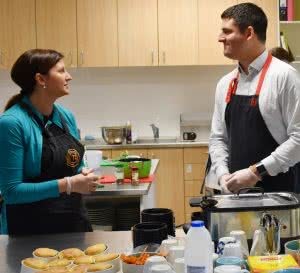 A series of events were held throughout the ACT to create discussions and push for action for pathways out of poverty in our region.

On Monday 15 and Thursday 18 October YWCA Canberra’s film ‘Hidden Women’ and ‘Together Creating Pathways out of Poverty’ created by the ACT Australian Red Cross and the ACT Council of Social Service Inc. were screened at the Canberra City Uniting Church. Our CEO Frances Crimmins spoke about the importance of creating pathways out of poverty at the screening event on Thursday.

YWCA Canberra has a history of providing housing support to vulnerable Canberrans through our transitional housing, affordable housing and supportive tenancy services and we are proud to share some of our clients’ stories. Hidden Women was developed with the support of the ACT Government through the Participation Grants Program (Office of Veterans and Seniors).

In the ACT, it is estimated that nearly 35,000 people, including 9,000 children, are living in poverty. While Australia has had 26 years of uninterrupted economic growth, emotional well-being and social cohesion are being eroded by systemic inequality.

Hugh Mackay, Canberra local and one of Australia’s most esteemed social researchers has said “inequality is widening, we no longer trust our political leaders, and people are more anxious and socially fragmented than ever.”

In Australia, we live in an affluent society that is internationally envied for its universal health care and low unemployment rate. But in the ACT, poverty is the daily reality for tens of thousands of people.

In the ACT, the average household income is considered high when compared to other regions. The cost of living is also high and has continued to increase for the fourth year in a row. The cost of essential items such as utility costs, petrol, transport, housing costs, health care, child services and education are all continuing to rise. This has a major impact on the households trying to survive on an income that is below average. The 2018 Rental Affordability Study conducted by Anglicare found there were zero affordable and appropriate rental properties for people who rely on income support payments.

On the Thursday of Anti-Poverty Week, YWCA Canberra held a Pantry Dash at Lanyon Food Hub for Anti-Poverty Week. Member for Brindabella Andrew Wall MLA attended and helped serve breakfast to the Mura Lanyon Youth and Community Centre members. The Lanyon Food Hub is available to people who live in the South Tuggeranong region and are in financial hardship. It is a valuable community service that helps around 400 local families. Diploma of Community Services Students from CIT attended the Pantry Dash as part of an offsite learning project and the event also helped launch a project the students are working on to start a Cooking Circles program and revitalise our community garden.