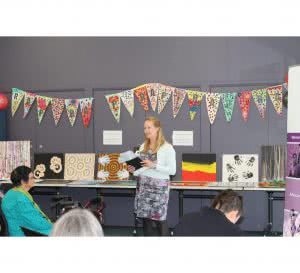 The launch was a celebration of the work YWCA Canberra has contributed as a champion for reconciliation in the Canberra community. It was attended by Ngunnawal Elder Aunty Agnes Shea, local school principals, representatives from the community sector, and YWCA Canberra staff from across the region.

Ms Crimmins said. “Our RAP is an important educational tool, not only for our staff, but also for the communities we work with, like the children who attend our children’s services and their parents for example. “Our ethos is to include everyone in the conversation – it’s like that saying, ‘Don’t have a conversation about us without us’. “But what makes the RAP program really powerful is that it’s about taking action, and making a measurable contribution to reconciliation.”

YWCA Canberra’s stretch RAP will cover the period from August 2014 to August 2016, and sets out clear goals and objectives to achieve within that timeframe. Ms Crimmins said that while the launch event was an important time to acknowledge and celebrate the achievements of YWCA Canberra and the progress to date, she added, “We know we have a long way to go, and we remain committed to reconciliation in the long term.” Aunty Agnes wished YWCA Canberra well on its way forward. “As you all embark on the implementation of this journey, I wish you luck and thank you for continuing to walk and work with us, the Ngunnawal people,”