CSW61 conclusions – what’s it all about?

Mishka is the Senior Policy Officer at YWCA Canberra

We recently welcomed home the YWCA Canberra delegation from the 61st session of the Commission on the Status of Women (CSW), who now have a clear picture of what needs to happen here in Australia and in Canberra in order to progress towards achieving gender equality. We caught up with delegates Hannah Gissane, Sarah Burr, Alyssa Shaw and Caitlin Figueiredo to hear their insights into CSW61, and what it means for us here in Canberra.

This year’s priority theme of CSW was of particular relevance to our own contexts: Women’s economic empowerment in the Changing World of Work. However, listening to the delegate’s feedback revealed just how broad in scope this theme is, and the diversity of experiences and issues as they relate to women around the world.

It’s important to remember that CSW61 took place against the backdrop of an erosion of women’s rights worldwide and a wave of nationalistic politics that is insular in nature and in direct opposition to the UN system and the principles of Human Rights that underpin it. Many women weren’t able to attend due to the Executive Order that banned a number of countries from entering the United States. The YWCA Canberra delegation were five of 2800 women who against these odds ensured women’s voices were heard. 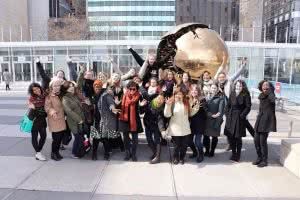 The agreed conclusions are one of the major outcomes of the CSW process. The negotiations have been a source of consternation among women’s human rights defenders and progressive feminist activists and advocates working internationally for some time. Hannah Gissane reminded us that for every activist present fighting hard for women’s rights, there are in equal numbers those delegates pushing for regressive measures. She talked us through those 102 paragraphs contained in the CSW61 Agreed Conclusions that took 107 hours to negotiate.

We know that policies and budgets are never gender-neutral and one of the key conclusion’s calls on the government’s around the world to adopt gender sensitive budgeting. This is a key way of ensuring that gender equality is not an afterthought, but forms part of the whole decision making process. The agreed conclusions quite rightly mentions the importance of resourcing this work, recognising that without sufficient finances, these statements will never translate to concrete change.

Eliminating occupational segregation was also identified as a universal priority and that reform needs to occur across the whole spectrum of barriers faced by women entering the workforce, from gender stereotypes and negative social norms as well as measures to enable women’s equal access to and participation in labour markets and in education and training.

This year’s emerging theme of CSW was the Empowerment of Indigenous Women. Delegate Sarah Burr spoke of the significance of the inclusion of text that recognises indigenous women that which calls on Governments to address the multiple and intersecting forms of discrimination and barriers they face. This was seen as the biggest advancement ever for language on Indigenous women and girls at CSW, and is testament to the incredible work of indigenous activists on the ground.

In addition to advocating the agreed conclusions, the delegates were unanimous in saying that perhaps the biggest outcome of CSW is bringing women together from across the world to build solidarity, connections in the spirit of a shared purpose and vision.

A particular highlight was the Youth Forum, which brought together nearly 1000 youth leaders and activists from around the world. Now in its second year, World YWCA was instrumental in convening this critical space for young people. The output was the Youth Declaration; Anchored in the voices, expertise, rightful opinions and experiences of young people, it underscores the importance of economically empowering young women and girls if we are to achieve SDG 5 in gender equality.

World YWCA also provided a Egumeni Safe Space where young women attending CSW61 could network with each other, meet and discuss key issues, or just relax. Attended by the Director of UN Women Natalia Kanem and Australia’s new Ambassador for women and girls Sharman Stone.

Ultimately, the power of the Agreed Conclusions rests with how they can be used as an advocacy tool at home.  The delegation brought home that the Australian Government has committed to these conclusions, and that they now have an obligation to deliver on these commitments. The team came up with a number of clear and tangible steps that the Government can take right now, that would immediately begin embed these Conclusions into our own policy frameworks:

ACT and the National Government

With gender parity in the Assembly & cross-partisan support for gender equality, YWCA Canberra believes that the ACT is perfectly primed to be the leader on Gender Equality.

The delegation reminded us that businesses have a powerful role to play in indigenous women and eroding pay segregation by:

Gender equality will also take a groundswell of women willing to lead this change. Tapping into the efforts of organisations leading the charge and supporting this critical work will be critical to ensuring that government deliver on their commitments.