The She Leads College Conference, taking place on Thursday 22 March, is a one-day event for girls in years 11 and 12, equipping participants with the practical skills and knowledge they need to become confident leaders. This year, we have an amazing line-up of inspiring young women who will discuss their pathways as trailblazers. Today, we chat to Hannah Mouncey, a Trailblazer panelist. 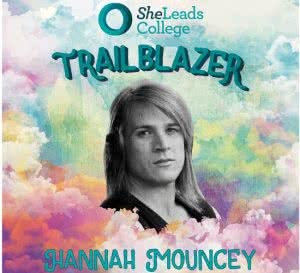 Hannah Mouncey is an Australian Rules footballer and most notably, an international handball player, having represented Australia 22 times to date including at the 2013 World Championships. Hannah narrowly missed out on qualification for the 2016 Olympic Games with the men’s national team, immediately after which she began the transition from male to female. Hannah is currently a member of the women’s national team that is working towards World Championship and Olympic qualification. In October 2017, Hannah’s nomination for the AFLW draft was rejected on the grounds of her transgender status just one day before the event took place, despite being tipped by football insiders to go as high as one of the top five picks in the draft. However, after vigorous campaigning, in February 2018 the AFL finalised its its gender diversity policy for the national league, and Hannah will now be allowed to play in the AFLW.

Exhausting, draining but rewarding. Through my experiences, I’ve spoken to so many parents of trans young people who now feel like their children, particularly those of trans females, have a future. So to know that makes all the tough times more than worthwhile.

I think for me it’s two things; having enough self belief to ignore the trolls out there, but also learning to find a balance between helping others and looking after myself, which does involve learning to say no sometimes.

Being a woman who has been and is in the public eye, online trolls are more than ready to take you down but this is something we all encounter, I’ve simply experienced it in a more public environment. Developing the confidence to ignore the threats towards my safety and comments on things such as what I look like has been a huge challenge, but one which has enabled me to carry on in a way that has meant those people are in the end the ones who look foolish.

It’s also a matter of taking the time away from whatever it is you’re doing, and saying no when you just feel like you can’t keep going anymore and need a break. Some people may be disappointed you aren’t attending their event or going to their march, but in the end you’re no good to anyone (least of all yourself) if you’re burnt out or feel exhausted. You simply can’t please everyone and as much as you’d like to, it’s just not possible.

The status quo for many years has been that men are largely the ones in positions of power, and without any sort of change the status quo and the results that come from that will continue. The simple answer though is that women are just as capable as men, so in theory we should already have equal representation in leadership positions. This is of course not the case, however, while we push for this what the women already in leadership positions are able to do is make change while inspiring the next generation – regardless of industry.

A young girl now may look up to an Ellyse Perry or Sam Kerr much more than a Gail Kelly, however, the qualities and values she picks up will hold her in good stead across the field. She may end up being a banker or a lawyer, but I’m sure her days admiring those athletes as a six year old will have instilled the belief that women can do anything, and that’s what’s most important.

Can I say mine? In all seriousness, the book I find myself gravitating back to is a book by Clinton Walker on the life of Bon Scott called Highway to Hell. Bon wasn’t female, but the main takeaway is to dare to be different and to back yourself. He wasn’t a perfect man, but no person is. But I feel the message in it is the most valuable lesson anyone can learn; believe in yourself.

Challenge everything, just because someone says something is what you should do doesn’t make it so. And if you challenge it and the answer is “just because”, definitely do the opposite.