In this NAIDOC Week edition of YAction, we are celebrating the incredible careers of some Aboriginal and Torres Strait Islander women and reflecting on their expertise and contributions to their field and their community. 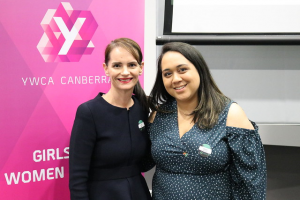 expertise and journey to impart knowledge on emerging leaders in similar fields. This special She Leads In-Conversation was unique; it is not often we are afforded the opportunity to hear two Aboriginal women-leaders discuss the legacy of colonisation in the Australian criminal justice system.

To a sell-out audience, Justice Taylor shared her long and outstanding legal career, including her time as the former Convenor of the ACT Women’s Legal Centre, the former Deputy Chief Executive Officer of Legal Aid ACT and now the first Aboriginal judicial officer appointed in the ACT. The key message of She Leads was reiterated by Justice Taylor, who told us, “We need to raise the profiles of Aboriginal women as leaders, there are so many Aboriginal women out there doing important work and very few are afforded public platforms.”

Justice Taylor’s candid conversation noted how the justice system remains prejudiced towards Australia’s First Nations people and that the only way of reforming this systemic myopia is to ensure there are more diverse people in positions of leadership, “Diversity has to be more than simply adding more white women to the mix,” she said.

This seems like a linear argument that issues with racial profiling and prejudice be mitigated by building the level of diversity at the leadership level. It was at this time that Hayley McQuire, the National Coordinator and Co-Founder of the National Indigenous Youth Education Coalition, asked Justice Taylor about the importance of Indigenous education in relation to achieving leadership pathways. Justice Taylor said, “It is important. I was very privileged to have a good education, my parents valued education for us”.

However, despite this early commitment to education, Louise reflected on how she still wasn’t sure if she wanted to, or if she even could, go on to university. It wasn’t until she saw the law being used against Aboriginal people, the thought of being in a position to change that became attractive to her, “My background means that I have an eye for things that other people simply do not see”. For Justice Taylor, the historically fraught nature of these relationships between Aboriginal people and the State, grounded in colonialism, continues to impact on the lived experience of Aboriginal people.

“By the time I am dealing with Aboriginal people in the criminal system, it is often just at a surface level. We have to ask, how did this person get here in the first place, what led up to this? Aboriginal women, in particular, are being failed by the criminal justice system – damaging stereotypes and ingrained racism that are reinforced by punitive legal procedures without pause for cultural appropriateness or regard for how Aboriginal women are doing the heavy lifting in dealing with intergenerational trauma and holding their communities together,” Justice Taylor said.

It is the responsibility of allies to assist by interrogating the systems that perpetuate racism, alongside incorporating diverse perspectives in positions of power. As reiterated by Louise, people with diverse perspectives have the ability to provide insight into areas that others cannot, and ultimately, they will be the drivers of consequential change.

You can read the next article in this series here or the previous one here.