Together We Thrive: 2019 She Leads Conference 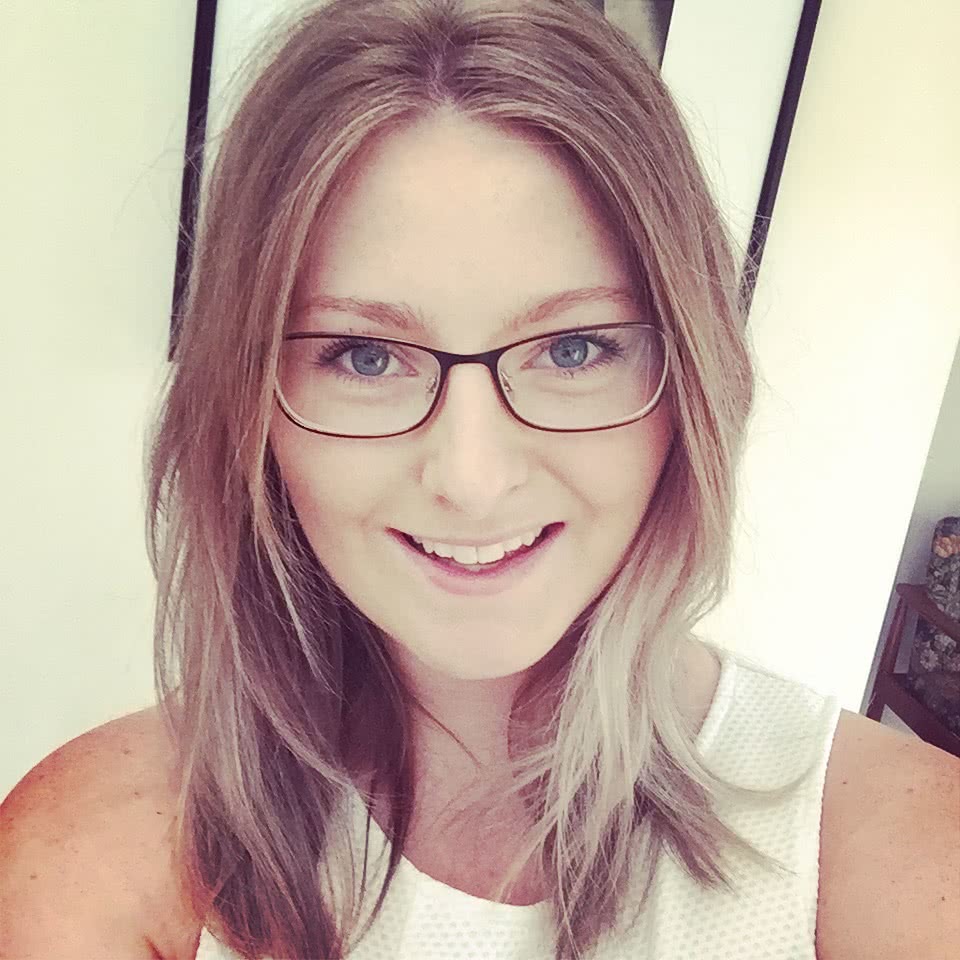 The 2019 She Leads Conference, held at the QT Canberra on Friday 2 August, showcased a diverse range of women role models, including female-identifying and non-binary people, at all stages of their leadership journeys, from a variety of fields.

Throughout a full day of keynote speeches, panels and activities speakers, we explored the theme of Thrive, in order to build our capacity to thrive in our community or workplace while supporting other women alongside us.

Our MC for the day, Jan Fran challenged our thinking about gender equality in Australia with a thought-provoking interactive true or false quiz. Our perceptions on women’s leadership was peaked with questions that revealed some areas for growth and encouraging achievements. We learnt that the workforce participant rate for women is 72 per cent, and that 3 in 4 people employed in Australia support the notion that 50 per cent of leadership roles should be women. 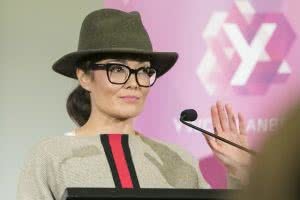 Next, broadcaster, writer and our first keynote speaker, Yumi Stynes took the stage and urged us to share our experiences in the workplace. She outlined that leadership was a tool we should wield to help one another. She prefaced the sharing of her story with a disclaimer of triggering content but encouraged us to sit in the discomfort, emphasising that failure isn’t the end and in fact failure is necessary to succeed. Yumi continued by saying that in order to propel ourselves forward as leaders we should know our strengths, know why we are hired and why we are an asset. Yumi stressed the importance of representing diversity in the media as well as in leadership roles. She encouraged us to give “zero f**ks” and told us that if we have an idea, we should share it because our excitement is fuel that others can use to work collaboratively with us on new ideas.

After a delicious morning tea break, we jumped straight into our first panel conversation, What are your limits, which was facilitated by 2019 ACT Young Australian of the year, and founder of national non-for-profit Country to Canberra, Hannah Wandel. The panel featured guest speakers Kemi Nekvapil, Nakari Thorpe, and Clare Moore.

The audience heard how each panellist disrupted limiting beliefs both from external sources, and from themselves, in order to live a balanced and happy life. To lead the conversation, Hannah explained that women are socialised to be a certain way and that we need to stop reinforcing the pressure to “have it all”, because 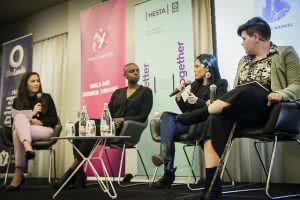 success or “having it all” is different for everyone. Kemi expanded on this and spoke about the necessity to step out of the passenger seat and into the driver’s seat to take control of the ride that we’re on in life, and that includes telling our loved ones what we need to feel supported. Clare emphasized that stepping into the driver’s seat also means knowing what success looks like for each of us as individuals. Clare also explained that guilt is a useless emotion and you cannot say yes to everything or you risk spreading yourself too thin. Nakari agreed explaining that if we say no, it will keep us on the path to our main goals. The audience was encouraged to be firm on our goals, know when to say no, recognise our red flags for burnout and make time for self-care. We were told that we can have self-compassion as well as care for others. Humans are incredible and we can do both.

Next up we heard from Debby Blakey, CEO of HESTA, about her journey to discovering her purpose. Debby told us that studies reveal that people who have purpose live longer and have healthier lives, and she was a strong advocate for saying no to opportunities that don’t align with our purpose and having the courage to make change. Debby asked us to reflect on who we believed to be the best leaders and explained that they are the ones who open the doors to success for themselves however who also open these doors for others. Debby left us with her view on diversity in leadership saying that diversity is incredible, we must make sure that all voices are heard, and see to it that those voices influence change.

After lunch, the audience heard from our fourth keynote speaker, proud Yorta Yorta soprano, composer and Artistic Director of Short Black Opera, Deborah Cheetham AO. Compelling us with her voice through singing, Deborah stated that Aboriginal people invented opera as they 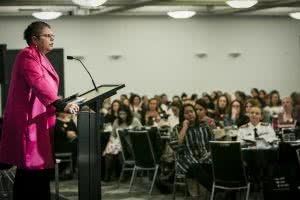 have been singing stories in costume and makeup since time immemorable. She also spoke about the importance of showing respect toward Australia’s First Nations Peoples by making an Acknowledgement of Country that is personal to us. Deborah challenged us to question the portrayal of women as characters in the entertainment, arts and media industries. She implored us to agree that the death of a female on stage should be nothing but a tragedy and that we need to examine how the women in media narratives are being treated. She ended with an interesting sentiment saying, “it would be nice for us to be on the same page, some of us aren’t even reading the same book, and some haven’t even been to a library”.

Karlie discussed how being an Indigenous woman in STEM meant that automatically people put her into a box of expectations. She found that although people were excited and supportive about her journey, there was an overwhelming sense of pressure to focus solely on Indige 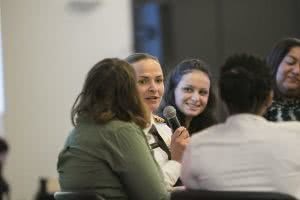 nous astronomy and research. To follow this, both Commander Kelly and Tarla highlighted the issues faced by women who are juggling their careers while also being mothers. Commander Kelly asked us “Who here are mums to young bubs and suffer guilt from either not doing enough or doing too much?”. To this, several people in the audience raised their hands. Tarla built on Commander Kelly’s question by telling us that in order to be a good leader you need to be as authentic as possible. She told the mothers in the audience to not conceal the mum guilt and instead talk about their anxieties as it’s a fundamental piece of getting to a more equal place. We were given advice by Zakia to build a support network, as she greatly emphasized that you simply cannot do it all on your own.

Our final keynote was Marina Go, Chair of Ovarian Cancer Australia, and non-executive director. Marina opened her speech by telling us that a key driver of her second and third career was primarily driven by her desire to see more 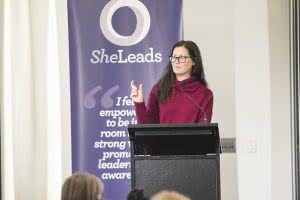 women in leadership. Marina told us that she had been through three stages of her career, as journalist and editor, to publisher and CEO, and now as a Director. She said she moved through them with careful planning and decision-making, teaching us that if you want to get to where you want to go, you must plan ahead. Marina’s decision-making process included her constantly thinking about the decisions that she needed to make along the way to get to what she wanted and then enacting them. Marina left us with the advice to turn our roadblocks into opportunities and to not underestimate the power of having someone who believes in you and actively endorses your work, someone who is a sponsor.

To conclude the day, Jan Fran challenged us to firstly ask ourselves what we need to do in order to thrive and then secondly how can we be that place that somebody else can thrive from. She reiterated that in order to truly thrive and to achieve equality, we must support one another. 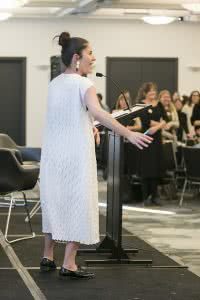 Thank you to our valued partners who made the event possible:

Join us at our next She Leads event, our In-Conversation with award winning author, Maxine Beneba Clarke and feminist author and editor, Zoya Patel. In this thought-provoking conversation, Maxine will discuss her leadership journey as an Australian born black writer of Afro-Caribbean descent alongside creating space for other African diaspora voices, and empowering those who’ve been historically sidelined in Australian literature to tell their stories