2020 She Leads College – Get to know Maddy Weeks

The She Leads College Conference taking place on Thursday 12 March, is a one-day event aimed at young-woman, non-binary and female students in years 11 and 12. It is designed to equip participants with the practical skills and knowledge they need to become confident leaders. Today, we chat to returning leading lady and She Leads MC, Maddy Weeks!

Maddy is a local Canberra comedian who has previously MC’d for the She Leads College Conference. Due to popular demand, she is back! Maddy is part of comedy troupe ‘Act Like A Lady‘, with which she has performed to sold-out crowds at the Canberra and Melbourne International Comedy Festivals. ACT Like a Lady is a group of female-identifying comedians, who aims to seek out and foster the comedic talent of female-identifying and non-binary people in the ACT. 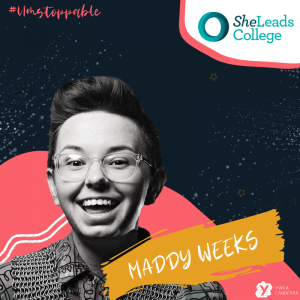 the MC at She Leads College before, clearly, you’re a fan. Tell us what you enjoy most about being our MC?

I LOVE She Leads College! The conference last year was one of the most uplifting, exciting and inspirational days of my life. Meeting all the incredible women and non–binary students gave me so much hope for the future. When I was their age all I was concerned about was keeping my Nintendogs alive and they’re actively out there with a mindset of positive change, optimism, and reformative action. It’s incredible. I love getting out on that stage and feeling their energy and hyping them up. It’s such a fun event and I’m counting down the days already!

How did your comedy journey begin?

Sort of accidentally. I was a drama kid in high school so my love of performing was always there. When I was growing up I watched A LOT of comedy and I had written a few jokes here and there over the years. I co-wrote a youth theatre production in 2015 at the local theatre and I snuck a few of my jokes in there. They went well live, so the day after that show closed, I drove to Canberra and did my ﬁrst ever stand up set. The rest is HISTORY. Being a bit of an outcast from a young age, humour was always my defence mechanism, it was the way I made friends when none of the kids around me dressed like me, acted like me or felt like me. Making jokes has always been an important part of who I am. Whenever something bad happens I always respond with humour. Doing comedy was a way for me to deal with and make money from all my life problems. Luckily there’s plenty of them and more to come! A long career in the making.

Why do you think it is important for more women and non-binary people to be in the comedy scene?

We can’t keep seeing the same man! Make the same jokes! Every night! They are all diﬀerent men, but honestly, I can’t diﬀerentiate between them. It’s such an intimidating environment and it’s such a boy’s club. People have been saying that since comedy began and sadly it’s still true. It’s gotten better and the men in the Canberra scene are very nice and welcoming, but it’s still so hard. People usually come along to gigs to check them out before they start performing themselves. The problem is they usually come along and see a man, another man, a man in a fun shirt, a man talking about how much he hates his wife, a man in a fun shirt talking about how much he hates his wife, etcetera. If aspiring comics don’t see people like them on stage, they are less likely to get the conﬁdence to start performing. It’s a big problem. The only way we can get more non-men on stage is for women and non-binary people to take the leap and ﬁnd the strength within to do it. You can do it! The audiences of Australia and the world need you.

Have you received much or any backlash being a queer woman in the comedy scene?

I’ve been very lucky and I haven’t received much backlash. But the stuﬀ that has happened has been quite jarring. I started stand up before I came out. It took me a long time to get good at comedy. When I started comedy, I wore a bowtie and a vest. Yet, I was telling jokes about my boyfriend and was just generally trying to be one of the boys in the room. Honestly, it must have been incredible to watch. The audience was just as confused about my sexuality as I was. I eventually ﬁgured it out and I started writing jokes about being queer, and they went well. Really well. My jokes got stronger as I started speaking my truth more.

Coming out has also made things a lot harder though. I did a show at the Melbourne comedy festival and a reviewer said: “Unfortunately when Maddy Weeks came on stage with some gay jokes, she lost the older crowd’s support”. That was one of the worst gigs of my life. It was clear they were uncomfortable with who I was and even when I noticed that and tried to relate to them, by talking about how much I hated my wife (typical boomer humour), that couldn’t even save me. I stopped the queer jokes completely, but it was too late. They all had their arms crossed in hateful solidarity. A big part of comedy is getting the audience to like you. They saw who I was and hated it. And it was so evident why. It wasn’t just my jokes. It was my GAY jokes. It was me. A gay. It was so evident that a reviewer noticed it, wrote it down and published it. Online. Publicly. It hurt a lot. I’ll never forget it. I have a fun joke about it now, which I also accidentally said in front of that same reviewer, but I can still feel the pain in my heart now whilst writing this. That experience changed me. I grew a lot, got a lot tougher and gained my ﬁrst enemy in the media. Super exciting stuﬀ!

What is your number one tip for women and non-binary people who wish to get into comedy?

DON’T GIVE UP-ﬁnd your people and tell your story. Starting comedy is one of the hardest things I’ve ever done. But if you stick with it, it’s so worth it. I’m in an incredibly supportive group chat with all the women and non-binary people I’ve met through comedy and it’s full of the best memes and advice you could ever ask for. Find your people, they will lift you up. Write about what you know. Write about your life. Tell your story. Watch other comedians for inspiration but don’t ever feel like you need to be like them. There are hundreds of comedians out there, but there’s only one of you. Don’t lose yourself, surround yourself with good people, keep writing what you think is funny and true to you- and your audience will ﬁnd you.

To hear more from Maddy, register to attend the She Leads College Conference on Thursday 12 March – Visit the event page for more information.