YWCA Canberra is calling on the ACT Government to ensure vulnerable young people receive the support and opportunities they desperately need to participate in the workforce of the future. 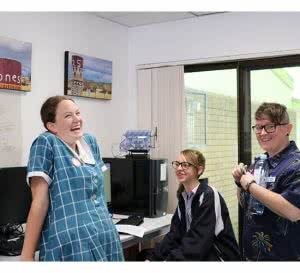 The ACT is one of the most poorly performing jurisdictions when it comes to equity in educational outcomes for students from lower socioeconomic backgrounds. Our experience stems from working with young people in Richardson, which has the highest number of people in the ACT (24 per cent) who fall into the most disadvantaged 20 per cent of all 15-64 year old Australians.

We know that the persistent and widening gaps between students from lower socioeconomic backgrounds and those from more affluent families, is most clearly evident in unequal access to and usage of technology.

The families of vulnerable young people often struggle to provide access to technology, the internet and to keep up with contemporary educational demands. Access is not only vital to contemporary schooling and education, but is a precursor to their future participation in the modern economy.

In fact, young people who don’t have access to technology while in school, often go on to suffer further disadvantage when attempting to enter the workforce.

The Australian Workforce and Development Agency acknowledges that the shift to higher work skills necessitated by technology and international competition and economic opportunities, runs the risk of leaving the low skilled and unskilled behind. Young people, older workers, Aboriginal and Torres Strait Islander peoples and people with disability are especially exposed to this risk.

We also know that youth educational disengagement, underemployment, and unemployment come at a cost to the ACT community, both socially and economically. In recent years, the youth unemployment rate in the ACT has been steadily growing, with 11.4 per cent of 15-24 year olds unemployed at August 2015. This is more than double the overall unemployment rate for ACT (4.8 per cent).

Through our Clubhouse, we are closing the digital divide by providing young people in Tuggeranong with access to science, technology, engineering, arts, and mathematics (STEAM) resources, skills, and industry placements.  This year’s Clubhouse Impact Report shows that 65 per cent of our young members strongly agree that they are likely to use these skills learned in their future career or job.

The ACT recognized as a leader in digital innovation, inclusion, and equality. However, there are a number of ICT black spots in the ACT, and it is of no coincidence that these pockets of poor access and usage directly corresponds to those areas of socio-economic deprivation.

That’s why we are calling on the ACT Government to ensure that it’s digital future is one that articulates a vision for all young people, and secures a role for them in the new digitalised economy.

To read more about this issue check out our policy priority ‘Young people and steam: bridging the digital divide’ and download the 2017 YWCA Canberra Clubhouse Impact Report.

This article was first published in the second edition of YAction. YAction shines a light on advocacy of YWCA Canberra, like minded organisations and the issues that are important to our community.Advocacy is core to what YWCA Canberra does – women  must be the crucial actors in any attempt to achieve gender equality.

This publication is about bringing the voices, initiatives and efforts of activists and organisations to the fore – we hope that by doing this we will increase awareness of critical issues and present opportunities for collaboration that our members, friends and supporters can get involved in. Ultimately, we hope to strengthen a movement that works together to achieve gender equality in the ACT, as we believe that this will take a society wide effort. YAction is about bringing current issues to the fore that are being debated in our Parliament and in the news, and that all too often happen in the absence of those voices that are most affected.