Building the case for change

YWCA Canberra recently partnered with the Office for Women to deliver an inaugural Gender Equality Forum. Stemming from the mutual objective of reinvigorating efforts to progress gender equality, the event drew together leaders from ACT Government Directorates, the for purpose sector, and the private sector to make the case for change. 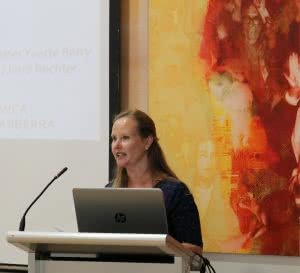 The forum kicked off on a stirring note with the ACT Chief Minister reflecting on the ACT’s legacy of being a cultural, social and economic leader in Australia. The Chief Minister expressed his desire for the ACT to be the leading Australian jurisdiction in gender equality, and to set a precedent for the rest of the country.

Minister for Women, Yvette Berry followed by acknowledging the tireless efforts of women’s organisation’s that had been campaigning for decades for women’s rights. But to bring about systemic change, it was now time for the wider community to play their part.

The ACT fares well across a range of gender equality indicators compared to other states and territories, which is largely explained by the relatively small gender pay gap in Australian Public Service. However, keynote speaker Virginia Haussegger, Director of the 5050/2030 Foundation, provided a sobering reminder that this does not signal an inevitable march towards progress, and that hard won gains can easily slip away. Reflecting on the fervour and energy surrounding the affirmative action movement in the 1970’s, she spoke about how we find ourselves in a situation that is not so different to the one we were in 30 years ago.

Australia has steadily declined in the global gender equality rankings over the past two decades, slipping from 15 out of 115 countries in 2006 down to 35th place in 2017.  The situation is most alarming when you look at the participation of women in the political sphere, with Australia currently sitting at 61 in the world. The ACT is no exception to this widening inequality: the recent Workplace Gender Equality Agency (WGEA) reporting found that the gender pay gap increased from 10.9 per cent to 12.4 per cent in 2016-2017[1].

Panellists brought their experiences of how they had observed and driven reforms and progress in institutions and other states and territories. Jerrill Rechter, CEO of VicHealth talked about how the recognition of domestic violence as a public health concern in Victoria, provided the fundamental shift in how the issue was perceived and helping to position it as a community-wide issue.

There was broad consensus among panellists that until we make changes to the design of our organisations and institutions, our gender bias will continue to work against progress. As Virginia succinctly summarized: “If we don’t change the design… we will keep focussing on fixing women and that’s not going to work.”

This Harvard Video explains how Institutional design has the capacity to de-bias our decision making processes by removing the opportunity for bias to slip in. For example, blind recruitment processes can recalibrate our minds away from the person who looks the part, to the person best suited to the job.

The University of Canberra’s Adjunct Professor and Academic Fellow, Carmel McGregor reflected on her own experiences of institutional design in the Department of Defence, and spoke of the importance of analysing the entire recruitment pipeline on how to attract, retain and promote women to leadership positions. This might start at the very beginning of the pipeline, where the language of job advertisements can reinforce gender segregation and discourage applicants. Jerrill explained how VicHealth is currently undertaking research into job advertisements to understand how language correlated with response rates.

A common challenge cited throughout the forum was the associated stigma of accessing policies. As one participant explained, a women would rather lie and say they were going for a run, rather than admit that she was picking up their child from school, because of the fear stigma they faced in the workplace and the potential impact on their careers. In addition, oftentimes women feel guilty for taking time off because of the additional burden it will place on their co-workers.

This is where leadership comes in. Paid parental leave policies and flexible working arrangements are the required steps in bringing about a more equitable sharing of unpaid care work, elevating women to leadership roles and addressing the pay gap – but crucial to this will be strong leadership to drive their implementation, encourage uptake, and address the cultural barriers that will inevitably surface through the process.

The Australia Institute’s Chief Economist, Richard Denniss’ made a powerful call to action when he asked the audience to stop accepting our leader’s tendency to “agree in principle”. He refers here to the incontestable data and the strong economic case for change and yet the lack of political action on the issue:

“Economically we know it can be done and are at the point where we need to move past the political power fluffing and worrying about the popular vote to get the job done.”

The forum closed with community, business leaders and Director-Generals strategising how to effect real change in their institutions. Drawing on the experiences of diverse sectors and industries, the groups sound boarded challenges in implementation, examples of success and what practical actions could be taken forward after today; A promising example of the community-wide effort required to achieve gender equality.

Today we built a strong case for change. As the experts explained, we have the tools, resources and experiences from other institutions and jurisdictions to get the job done. What we need now is strong leadership and the unwavering commitment to lead this change.

You can stay engaged with our ongoing push for gender equality and other advocacy by subscribing to YAction.