Dr Summers is a best-selling author, journalist and thought-leader with a long career in politics, the media, business and the non-government sector in Australia, Europe and the United States.  She has been an outspoken champion of equality for women since the 1970s, and has published several books, including the acclaimed Damned Whores and God’s Police. 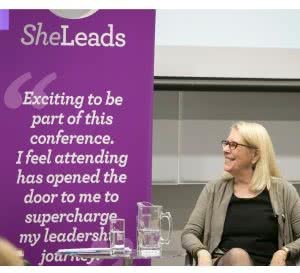 Executive Director Frances Crimmins opened the event with an acknowledgment of country, and discussed the continuing need to increase the number of women in leadership roles. Frances stated that “the social and economic case for gender equality is clear – women make up one half of the population and deserve equal access to health, education, economic participation, and decision-making power.”

Next, Adjunct Professor and Academic Fellow Carmel MacGregor, discussed the work the University of Canberra is undertaking through their 50/50 by 2030 Foundation. The Foundation is a new gender equality initiative aiming to have women and men equally represented in leadership positions in government and public administration sectors by 2030.

Dr Summers was welcomed by excited attendees of all ages and genders.

She began the conversation by highlighting the lessons learnt from her illustrious career, and stated the best and most important piece of advice she has is to “work hard, be bold, and have fun.”

Dr Summers discussed the process of creating Elsie, Australia’s first women’s refuge, and stated that in the early 1970s there were no refuges, only women’s shelters. The shelters provided nightly accommodation, but banned traumatised women and their children from residing in the shelter for the day, and provided no health or legal services. Dr Summers said that this dire situation motivated herself and her friends to create Elsie.

The conversation then turned to domestic violence in Australia. Dr Summers stated that the instances of violence have increased, even though reporting has improved and women are less reluctant to seek assistance and discuss their experiences. To address the epidemic of domestic violence, she argued that Australian society needs to recognise women as equal and able contributors.

To achieve gender equality, Dr Summers suggested we look to the deceptively simple Women’s Manifesto, released in March this year. The Manifesto includes four principles that must be achieved, which cover all areas of life that hinder gender equality: financial self-sufficiency, reproductive freedom, freedom from violence, and the right to participate fully and equally in all areas of public life.

Dr Summers argues that while these four principles have many smaller attached goals, such as equal pay and equal respect, these goals are not only measurable and achievable, but they can be achieved by 2022.

One reason gender equality could be achievable in five years, she stated, is because many young women are now proudly declaring themselves feminists. Dr Summers believes this phenomenon has been largely spurred on by the humiliating and degrading treatment of the former Prime Minister Julia Gillard, and the debasing and violent language thrown at women in the public eye, such as Yassmin Abdel-Magied and Clementine Ford.

The conversation concluded with Dr Summers offering young women a final piece of advice. She said that the best thing women can do is it to pick a career path that celebrates their passions, and to do it regardless of what others think. Being your own person, she said, is the single most important thing you can do.

To close the session, Dr Saunders thanked Dr Summers for the stirring discussion, and invited attendees to have their books personally signed. Attendees then went on to network with one another over drinks and canapes.

The next She Leads In-Conversation is happening on Wednesday 16 August. To receive updates about this upcoming In-Conversation, and future She Leads events, follow us on facebook and twitter, and subscribe to our She Leads Newsletter.