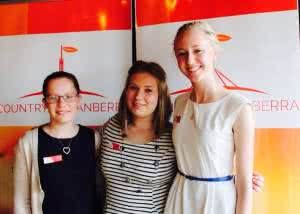 Great Ydeas grant recipient, Hannah Wandel, launched her Country to Canberra project earlier this year, to great success. Last week, the winners of the Country to Canberra essay competition came to Canberra to meet distinguished women leaders, and take a special tour of Parliament House. We’ll be sharing more details of that exciting event soon, but below, you can read the winning essays by Vesna Clark, Libby O’Brien and Hannah Worsley to find out what young women in regional communities think of gender equality.

The NSW Southern Highlands, known for its agriculture, wineries and coal mining, has 45,000 residents. Despite being only 120km from Sydney, the issue of gender inequality is prominent and the need to improve female empowerment within this rural community is crucial.

Being a female Year 11 student, I view sexist attitudes daily. These attitudes are often disseminated by male role models. My school, until very recently, had an all-male administration team, inadvertently giving a potent message to students. Living in a close-knit community, our major link without the outside world is the media, whose stereotypical representation of women becomes endemic. Males my age often disparage other males by calling them “girls.” I consistently view derogatory language projected at females including “slut”, “whore” and “bitch.” Although often used ironically, this practice subtly erodes girls’ confidence.

Employment opportunities in the Southern Highlands are limited, especially for females. Women are generally not seen in agricultural management or as tradespeople, partly because this is not encouraged. Within my school this is apparent when you observe the all-male senior Construction, Woodwork and Engineering classes.

An area that is particularly worrying is sport, and the way it dismisses women’s achievements. The school I attend is, in my opinion, primarily sport-focused (with rugby dominating). Sports news is about male achievements. The Southern Highlands newspaper publishes articles addressing boys’ sporting teams, but I have never seen a women’s team featured. Sportswomen are disempowered simply because their achievements are not recognised.

Attempting to break down these stereotypes that disempower women is a difficult task, as they have been formed over generations. The wider community needs to encourage young women to pursue whichever career path they desire. Being in a male-dominated workplace can be daunting, and support and encouragement are needed. Sports such as rugby and cricket need to grow to include women. If women’s teams are created in particular sports that are perceived to be boys’ sports, then it may eventually lead to mixed teams. Thus, eliminating gender discrimination and further empowering women.

I believe that education about issues such as safe sex, mental health, self-esteem and the poisonous effect of the media on body image is paramount if women are to have more control over their lives. An effective way we can educate women in rural communities is by establishing a Women’s Health Centre where doctors, counsellors, support groups and information are easily accessible. By creating a close and connected community for women, information is shared and confidence increases. Another strategy that can be implemented is mentorship to support and guide young women. In order to establish a mentor program, committed volunteers could be linked to a Women’s Health Centre, where a community of women are dedicated to helping other women in order to empower each other.

Through strategies that involve diminishing stereotypes, encouraging women and recognising that their capabilities and achievements are no different from men’s, we can achieve empowerment. If a whole rural community can improve gender equality this will spread throughout other communities and eventually diminish gender stereotypes that oppress and limit young women. 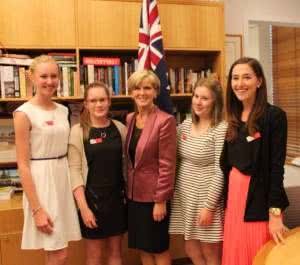 Could a place with so much potential be discriminating against women, one of its most significant resources? Beaudesert is a small rural town with a population of approximately 6,000 people.  A welcoming town full of open-minded and friendly people, Beaudesert shows great pride in supporting local business, indigenous culture and young people.

Sitting down with my local council representative for Beaudesert, Jennifer Sanders, I expected to be part of a storm of male animosity, but that couldn’t be further from the truth. As a councillor and public figure in the area of Beaudesert, Jennifer has spent much of her time working with her male counterparts in what appears to be a male-dominated role. Throughout her career she has had the opportunity to get to know many small business owners in the heart of Beaudesert, even naming the owners of every business in the main street. From her perspective, it was evident that not only were women thought to be just as equal to men, they appeared to be more eager to get involved in the business side of our community.

Although women have the motivation to become a business owner in Beaudesert, Jennifer revealed that most women are too afraid of taking on a professional position such as a CEO or politician. “Girls have never been taught that they have the abilities to one day become Prime Minister or someone important later in life,” Jennifer said. From personal experience, Jennifer believes that she missed opportunities when she was younger as she was unsure about her abilities. As she became more experienced, she realised that she was just as capable as a man and she was able to bring a new perspective on subjects that men just couldn’t comprehend. Of the six councillors on the Scenic Rim Shire Council, three representatives are female.

It is evident that in the community of Beaudesert women are not actively discriminated against by others. Rather, they are afraid of what people might think if they take on a role out of their comfort zone or go against stereotypical ‘women only’ roles. At the current moment, there are many incentives to get women involved in more activities in society. These include the Australian Small Business Champion Awards and the Rural Women’s Award. Although these reward women for their achievements, there appears to be no strong incentive to get rural women involved for the first time, nor are there many opportunities for women who have never given anything a go. Many people in our community have voiced their opinion on this issue, and a recent survey conducted by a Beaudesert State High school student found that 70% of the general public surveyed thought that more incentives should be introduced to encourage and empower women.

Though it is apparent that women in the Beaudesert area are not actively discriminated against, more should be done to involve women in areas that they have not traditionally been involved in. Access to strong female role models is imperative to breaking down gender barriers in rural communities. 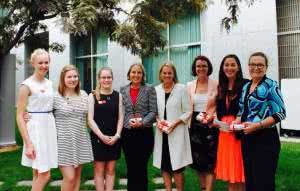 “Why would you want to be a politician? Isn’t that like, for guys?”

“Well of course he’d get it, boys are always better at science.”

“Why would girls want to join the army as soldiers when there are nursing and cooking roles for them?”

These are just a few of the statements from my fellow classmates pertaining to women and their role in society that have shocked me to the core. They say it so easily, barely stopping to consider the things they are insinuating about a particular gender within a single sentence. When I’ve attended programs where I met people from urban areas, I’ve found that they exhibit less “casual sexism” than any of my rural peers. So why is it that gender equality seems such a hard concept to grasp in rural communities?

It’s an intriguing phenomenon, where rural youth seem to experience the effects of a gender disparity on a much larger scale than those in urban areas, yet not even know about it. Having an avid interest in politics, I’m seen as an oddity by many of my peers, and not just because that in itself it is an uncommon interest to have when coming from a country area. It’s also because the concept that a female would want to try and break into the male-dominated realm of politics is so foreign. Within my community, it’s clear that while the majority of people truly believe in gender equality, a lack of exposure to various feminist and gender equality movements leaves our rural citizens with a distinct misunderstanding of what gender equality is. The statements I mentioned earlier come easily from people my age, and unbeknownst to them they are perpetuating a gender stereotype and promoting the very existence of the infamous glass ceiling women still face.

Simple awareness of, and exposure to, the more diverse demographics of urban communities has helped me understand what we as a rural community face in terms of gender inequality and how we should overcome it. As I stated, in a small regional town we miss out on the impassioned rallies of feminists fighting for equal opportunity and we are at a distinct disadvantage when it comes to accessing the resources needed to spread the word about gender equality.

To empower women, both young and old, and to create a new generation where gender equality is top priority, rural communities such as my own need to be afforded more education campaigns, programs encouraging young women’s involvement in male-dominated career paths, and an overall promotion of gender equality. Rural communities are famous for their ability to band together and make a concerted effort to enact change. To bring out our fighting spirit and stop the gender inequality we need to be educated about, and exposed to, the issue. It’s not that we are backwards, it’s that we don’t know enough about the issue, and if we can educate people we will know what we are facing and be empowered and inspired to do something about it.

Check out this great blog from Hannah Wandel for more!