The She Leads In-Conversation with Magistrate Louise Taylor was facilitated by Hayley McQuire on the 14 May 2019 at the Ann Harding Conference Centre, University of Canberra. 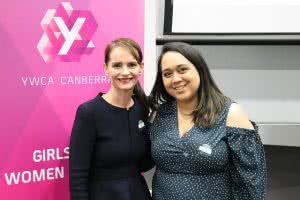 This key message was reiterated by Louise Taylor throughout the evening, who told us “We need to raise the profiles of Aboriginal women as leaders, there are so many Aboriginal women out there doing important work and very few are afforded public platforms.”

Louise is a proud Kamilaroi woman, a Canberra lawyer with extensive experience in the criminal justice system, the former Convenor of the ACT Women’s Legal Centre, the former Deputy Chief Executive Officer of Legal Aid ACT and now the first Aboriginal judicial officer appointed in the ACT. This only scrapes the surface of the work and achievements of Louise who, above all, is working to dismantle a system that remains prejudiced toward Australia’s First Nations people.

Louise explained that the only way to reform the system is to ensure that there are more diverse people in positions of leadership. “Diversity has to be more than simply adding more white women to the mix.” Louise reminded us.

The facilitator, Hayley McQuire, proud Darumbal and South Sea Islander and the National Coordinator and Co-Founder of the National Indigenous Youth Education Coalition, then asked Louise about the importance of Indigenous education in relation to achieving leadership pathways.

“It is important. I was very privileged to have a good education, my parents really valued education for us” Louise replied. Despite this, Louise still wasn’t sure if she wanted to, or if she even could go on to university.

“What then encouraged me to go on to study law was that where I grew up, I was constantly seeing the law used against Aboriginal people, so the thought of being in a position of power where I could change that, well that was attractive to me.”

These same experiences drove Louise to take the leap from her position as Executive Officer of Legal Aid ACT to becoming a magistrate, and her experiences continue to actively shape the way in which Louise approaches her role. “I think due to my background, a part of my role is unpacking things that other people may not question. My background means that I have an eye for things that other people simply do not see.” 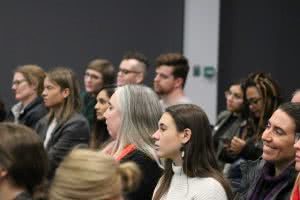 Louise went on to explain that she always questions why people may behave in a certain way, especially in regard to Aboriginal people. Louise reminded us how Aboriginal people bring historically fraught relationships with the state into their encounters, and sometimes there is a misunderstanding and a lack of knowledge. A lot of the time there is undeniable intergenerational trauma from the ongoing historical impacts of colonisation.

“By the time I am dealing with Aboriginal people in the criminal system, it is often just at a surface level. We have to ask, how did this person get here in the first place, what led up to this?” Louise emphasises. “I just hope that I bring the capacity to make change [in my role], and I believe in the power of restorative justice.”

Louise explained how she understood that the criminal justice system has failed Aboriginal people, especially Aboriginal women, and has been imperfect for a long time. She connected this to how ingrained racism, usually referred to by people as ‘damaging stereotypes’, impacts upon legal procedures.

When asked by a member of the audience what advice Louise would give to the audience to help shift the structures, Louise emphasised the importance of allyship.

“Allies need to work to unpack and interrogate what’s actually going on with racist and discriminatory practices. For me, as I’ve gotten older, I’ve also become more comfortable in my skin and am far more comfortable calling out these issues,” Louise told us. She explained how being a good ally also meant creating pathways for others. “I never want to be a feminist who pulls the ladder up behind her, I want it to be there for the women that come after me.”

Louise explained that she wanted to continue to engage in challenging conversations surrounding diversity and how meaningful diversity can aid in breaking down inherently racist systems.

In order to achieve meaningful diversity, we should ask ourselves ‘who is in the room and who is at the table’. She explained that it is damaging to simply be tokenistic in workplaces, businesses and organisations because Aboriginal people can see through tokenism.

Having had the privilege to listen to two brilliant Aboriginal women leaders discuss issues pertaining to Australia, it is undeniable that decolonising the criminal justice system is not solely the role of Aboriginal women, as outlined by Louise. “Aboriginal women are doing the heavy lifting in dealing with intergenerational trauma and holding [their] communities together.” 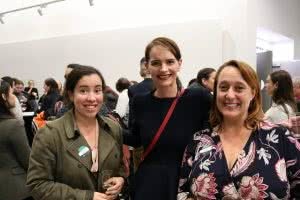 It is the responsibility of allies to assist by interrogating the systems that perpetuate racism alongside incorporating diverse perspectives in positions of power. As reiterated by Louise, people with diverse perspectives have the ability to provide insight into areas that others cannot, and ultimately, they will be the drivers of consequential change.