Angela Priestley is the Publisher and founding editor of Women’s Agenda.

I didn’t know much about Professor Michelle Simmons before she was named 2018 Australian of the Year. 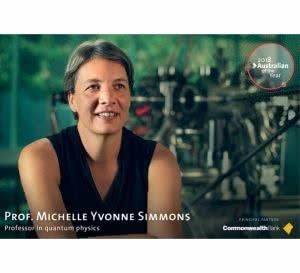 But after reading her Australia Day address, I’m hooked on her incredible career and inspired by her words of wisdom, if not a little intimidated by her leadership in quantum computing and nanotechnology.

I hope Michelle’s recognition will not only encourage more talented women into science and technology, but also encourage more of us to set and voice big and audacious goals.

Michelle’s ambitions are seriously bold. While being more specific than “changing the world!”, her work is already doing as much, and has the potential to position Australia at the centre of the quantum revolution in computing.

Michelle’s also used the recognition she’s achieved to put out a stunning call for Australians to be known as people who “do hard things”. Yes, we’ve got a great natural environment and lifestyle, but don’t let that detract from the difficult work that’s been done – nor from the need to set serious ambitions for the future.

She believes all students – male and female – should be taught to have high expectations of themselves. The bar should be set high, especially in science education, and students told that we expect them to jump over it.

Too often we’re encouraged to give up the hard in order to pursue the things we’re already good at and enjoy. I know this was certainly the case for me in high school. I recall dismissing physics as taking up too much brain power and studying time, and giving it up to pursue essay-writing subjects I could pass with ease.

That attitude can carry on into a career – where there’s frequently an emphasis on pursuing things you’re already good at, rather than learning new skills and techniques that, for a period, may take you away from more immediate wins.

We also see it in how we celebrate success, with the ‘quick wins’ and ‘overnight success stories’ being given more prominence and attention than the wins that are more long-term and therefore more subtle. Social media especially can see us celebrating the more instantly attainable, rather than the out-of-reach goals and targets that might be years, if not decades, in the making.

Obviously naturally smart, Michelle could have avoided challenging work from a young age – indeed she concedes she gave up physics in high school in the UK because she enjoyed, and was less challenged, by other subjects. She realised her mistake about halfway through her exam year, and realised then that “my greatest joy was solving problems that were complex and not so instantly rewarding to do.” She also then had to do physics outside of school in order to catch up.

The lesson? You can always do the things you enjoy and find easy outside of work and study. But those technical and problem solving skills that require more effort may not be so easy to pick up later on in life.

It’s the things that are hard, not easy, that present the greatest rewards.

During her Australia Day address, Michelle also shared how she attended a “pretty rough school” in London, hated the limelight as a child (and still does) and once did everything possible to avoid public speaking. A physics PhD, she said, became a passport to the world, and she started her career designing and building electronic devices – including solar cells – at Durham University in the north of England. She then went on to Cambridge University to learn about the “weird physics that emerges when dealing with [the] world as it gets very small (down to the size of individual atoms).”

She decided she wanted a more ambitious project to work on.

“Specifically, I was drawn to the technological challenge of trying to create new devices that had never been made before, where each atom had to be put in place to engineer a particular effect – in essence to create electronic devices at the atomic scale.”

That ambition brought her to Australia in 1999. She was, most likely, in a position to have her pick of the best academic institutions in the world, but she accepted an Australian fellowship immediately because she “wanted to build something” and believed this would be the best place to do so. “Australia offers a culture of academic freedom, openness to ideas, and an amazing willingness to pursue goals that are ambitious,” she said.

In the year that she arrived in Australia, Michelle and a small group also hatched a plan. In her words: “The plan was to focus on adapting the technology that existed to image atoms to see if we could make a functional electronic device where the active component was a single atom – in other words, to leapfrog the global IT industry and make devices on the atomic scale.”

The plan worked well with a separate Australian-born theoretical proposal at the time that if you could control things at the atomic scale, you could also create an entirely new type of computer, based entirely on quantum physics – a ‘quantum computer’. It’s predicted such technology will exponentially speed up computational power in the future, to solve problems in minutes that would currently take thousands of years.

People told Michelle’s team them they couldn’t do it, but the team persisted regardless. Identifying eight key challenges, they then went on to overcome such challenges over the course of a decade. So far, they’ve developed world-first atomic-scale devices, including the world’s smallest transistor, among other things — but that’s just the start. There’s still much more to come, and plenty of hard work to do.

“The significance of this for Australia should not be underestimated. Today, there is an international race to build a quantum computer and the field is highly competitive – nicknamed the space race of the computing era,” Michelle said.

“It is nail biting, it’s exciting and it’s happening here right now in Sydney. But what really inspires me now is that we are at the threshold of making this into something practical and real, with a demonstrable benefit.”

She said she was grateful and proud of the work Australians have done and the opportunities she’s been given, but there is room for improvement.

“In our innovation policies, in our education system, and in the ambitions of our scientists and discovers. I want Australians above all to be known as people who do the hard things.”

This article was originally published on Women’s Agenda, and has been republished here with permission from the author.