‘Don’t apologise and bat it back’: Mary Delahunty on being direct, irreverent and insistent

Mary is speaking at the annual She Leads Conference in Canberra on 1 August, an inspiring day of discussion, networking and action on women’s leadership. Women’s Agenda is proud to support the event again this year as Online Media Partner, sharing insights, advice and stories from some of the wonderful women who are speaking at the Conference. To find out more, visit the She Leads website. 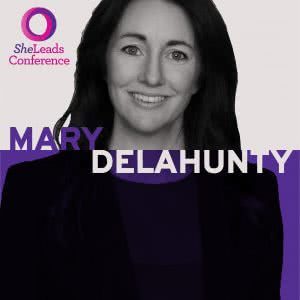 Mary Delahunty is an inspiring example of the power of a portfolio career built around advancing women. As Head of Impact for HESTA, an industry superannuation fund with an 80% female membership, her work has successfully highlighted the policy changes needed to close the gendered retirement gap, including undertaking a Churchill Fellowship on the topic in 2015.

She’s also in her second term as a councillor for the City of Glen Eira in Melbourne’s inner south (serving as Mayor last year), is an authority member of the Emergency Services Telecommunication Authority and chairs the Victorian Ministerial Council for Women’s Equality.

It’s these outside interests that she believes have most shaped her leadership style, with Mary conceding that her time spent in local government and the constant negotiation that entails has “hardened” her.

“I often find I’m considered at work in a normal corporate setting to be very direct and I think that’s because I’ve spent a lot of time having flat out arguments with people about things, because we’re just very passionate about the outcomes.”

“I’m quite direct and I think that doesn’t always come off well. My style is to be a little irreverent, have a good laugh, but be really insistent on the things that matter.

Mary says that her direct approach has attracted criticism, leading her to question herself, but that ultimately it’s her desire to support other women that drives to fill a “leadership void” when she sees it.

“It’s really uncomfortable and you feel weird, but if you do it publically, guaranteed there’ll be messages from women after you’ve left the room thanking you. It reminds you that women are not at the stage yet where everyone has the confidence to be as big as the men, and so it’s your obligation in those situations to do it, so they feel confident to as well.”

Mary’s initial steps to investigate a board career weren’t encouraging. Several years ago she approached a professional football club to express her interest in becoming a board member, only to be met with resistance from the Chairman, because, “[We] had a woman on the board before and it didn’t really work out.”

Mary laughingly recounts the story and says it only strengthened her resolve to pursue a board role, though with a more progressive organisation that better aligned with her values. She describes her current role on the Victorian Ministerial Council for Women’s Equality, where she works with a group of “20 bolshie feminists”, as “like coming home”, with the Council currently focusing on gender sensitive budgeting, gender stereotypes in the media and financial security.

Mary says one of the aspects of her work life that provides her with the most satisfaction is her mentoring of younger women, particularly during their transition back into the workforce following parental leave. She encourages them to be brave in demonstrating that having a child is “just part of life”.

“Don’t apologise for having a sick baby, or for having to express breast milk at work.

“If you don’t work Wednesdays anymore, and people keep calling meetings on Wednesdays, literally call it out and say “I can’t attend Wednesdays” instead of apologising or offering to dial in. You have to bat it back, otherwise you start to get the guilts and the feeling that ‘I’m not achieving anything’.”

She’s also passionate about attracting more women into local government, saying it’s been “the bastion of old men in suits for a long time, so it’s hard to be what you can’t see.

“Local government as a sector hasn’t done a very good job of explaining what we do.

“I think the structures are in place, so now it’s about the optics and the appeal of it, to get more women interested. Part of my role is doing a better job of selling it.”