Where do the major parties stand on issues affecting women in the ACT Election?

In the lead up to the 2016 ACT election, we wanted to ensure that gender equality and social inclusion are priorities for our candidates for Government. That’s why we released an election scorecard, ranking each major party on their responses to five key issues facing Canberrans.

On 1 August the Executive Director of YWCA Canberra, Frances Crimmins, wrote to ACT Labor, The Canberra Liberals and ACT Greens asking for their responses on five key policy issues that address selected issues from the YWCA Canberra Election Platform: Every woman, every child, every day.

Download the full scorecard report and summary document below:

The five questions asked of each of the parties were:

Replies from the parties were analysed and each response was allocated one of the following categories:

We consulted with all major parties prior to releasing these results, and ensured that they had multiple opportunities to respond and adjust their responses.

The final results are:

The ACT Greens received a score of seven out of ten or 70 per cent for their responses to the scorecard. The ACT Greens released a $5 million domestic violence package, including $2 million across four years for primary prevention programs in ACT schools.  The ACT Greens also committed to government legislation and policies having gender impact assessments applied.

ACT Labor received a score of five out of ten or a pass mark of 50 per cent for their responses to the scorecard. ACT Labor demonstrated some commitment across all five areas, but did not support any of the policies in full.

To find out more about the scorecard, see the verbatim answers provided by the parties in full, and learn more out our scoring process, download the full document below. 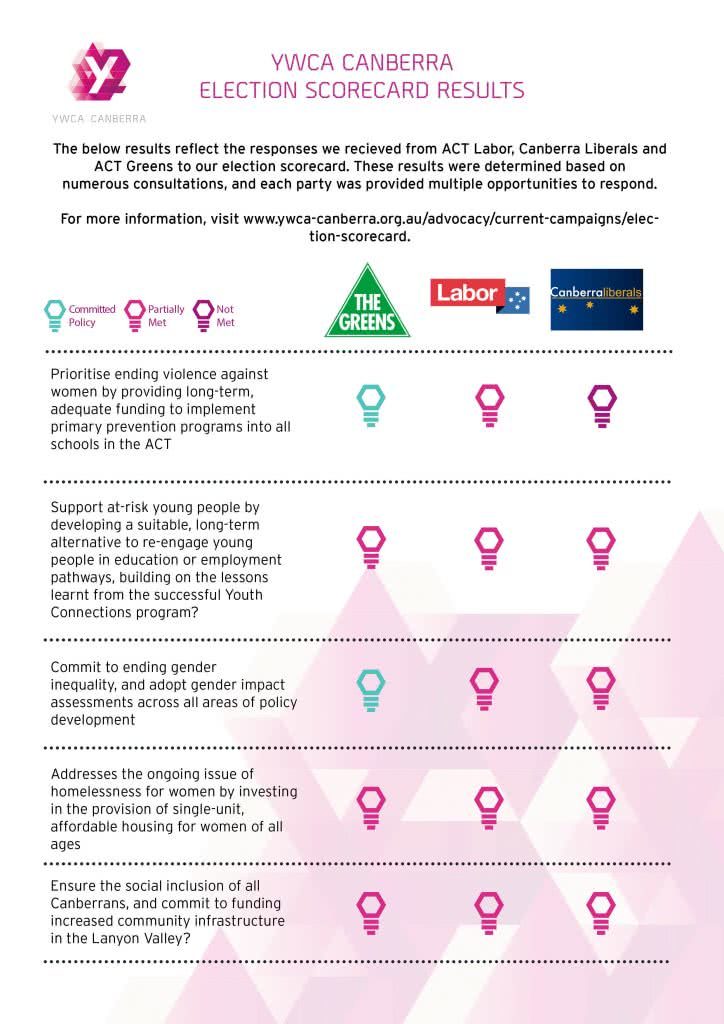