Embracing our wild sides at She Leads College Conference 2021

On Friday, 26 March, 100 girls and non-binary people in years 11 and 12 from across Canberra and regional NSW joined us at the 2021 She Leads College Conference to learn about overcoming adversity and using it to power their leadership journeys. This one-day leadership conference at Kambri Cultural Centre at ANU was inspired by the theme Wild and, in light of the wild events of 2020, aimed to help young people explore and discover their own leadership identity and values, and use their personal experiences to grow and develop resilience. 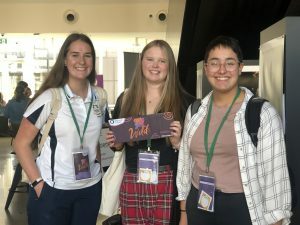 Ngunnawal Elder Aunty Violet started us off with a heartfelt Welcome to Country. After reflecting on the past of the place on which we were meeting, Aunty Violet spoke of her hope for the future given how many powerful young women are working for positive social change.

Our bubbly MC, Karina Judd, then officially opened the event, and got the young people warmed up by getting them to ask her questions instead of introducing herself. What she didn’t expect was just how open the young people were to stepping forward, and she faced some insightful and robust questions!

The first of our two powerhouse keynote speakers, professional mountain biker and Olympian Bec McConnell, shared her personal stories of overcoming adversity. She reflected on how illness and the male-dominated culture of mountain biking had impacted her career, how she found her own voice, and the difficult decisions she had to make to put herself first.

The young people were touched by her honesty and vulnerability as she opened up about what leadership means to her. “Being a leader doesn’t mean being in a position of power. It can be believing in yourself.” Bec taught that, as one of the young people said at the end of the day, “leadership is not so much a role but the ability to act upon and overcome hard times in life”.

She also encouraged the young people attending to remember that “our actions can make a world of difference to people we haven’t even met.”

The young people then participated in an improv activity facilitated by Canberra acting group, Lightbulb Improv. These exercises were designed to teach them how to think and act swiftly in a state of stress, so they can respond under pressure, think creatively and communicate effectively. These very same skills develop better conversations, faster thinking, unlocked creativity and confidence. 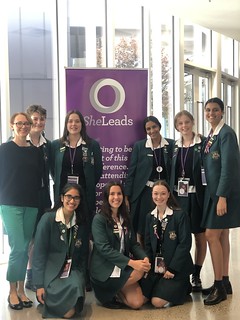 One of the most popular activities was a ‘ranting exercise’, where the young people paired up and took turns ranting about something that annoyed them, while their partner who was silent listened and considered the values that had led to the annoyance. This activity not only taught active listening, but how to really delve to the centre of an issue and use that to promote positive communication.

Our second activity for the day, EQUIP, was focussed on identifying, understanding and learning how to challenge unconscious bias. Facilitated by YWCA Canberra’s youth engagement team, this workshop helped the young people develop a toolkit to become resilient, break down rigid gender stereotypes and live as their authentic selves. It was then time for an incredible panel, facilitated by Leah House, around the theme of Finding your superpowers.

Our panellists Jakida Smith, Jenessa O’Connell and Krishaa Tulsiani shared their leadership journeys and the moments that have shaped them as leaders.

Krishaa, a passionate feminist and climate change advocate, reflected on how her leadership journey was enabled by the support of those around her, comparing it to the saying of ‘you can’t move a mountain’. According to Krishaa, you don’t need to move the mountain: you just need to help others take a step up it. It may take a million steps, but we can do it by helping each other.

Jenessa continued on this theme and spoke of how it applies to gender equality, although her analogy was a bit more colourful, using the concept of building with Lego! ‘By supporting other women, we are all putting in Lego blocks and with those Lego blocks we’ll eventually build gender equality!

As an Aboriginal woman working to bring cultural awareness to young people across the Canberra region, Jakida reflected on the barriers that others had placed before her and how they hadn’t considered her a leader. She had a strong message for our students: “Be confident in what you’re doing. Don’t let people change your mind.”

Our last keynote speaker was the Bodzilla herself, April Hélène-Horton. April is a writer, podcaster and activist. Aside from her corporate experience as a leader within private and public sector roles, she has also led campaigns for Curvy Swimwear as the first plus–size bikini model to appear on Australian billboards. 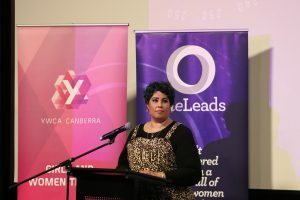 April gave a great analogy about stress and resilience using the concept of a balloon. The more we use the balloon, the bigger we can blow it without it popping. But we also need to be aware of how big our balloon is, and take care it doesn’t over-inflate.

Finally, April connected with the young people about the importance of breaking down stereotypes and living as our authentic selves, using the example of Harry Styles, which seemed very popular! “The more we see people we are not expecting to see, the more we break the barriers and biases of the mainstream. That’s what keeps me going.”

Want to see photos taken from this year’s She Leads College Conference? Check out the event‘s album on our Flickr.

If you wish to find out more information about She Leads College Conference 2021, contact our team at SheLeads@ywca-canberra.org.au