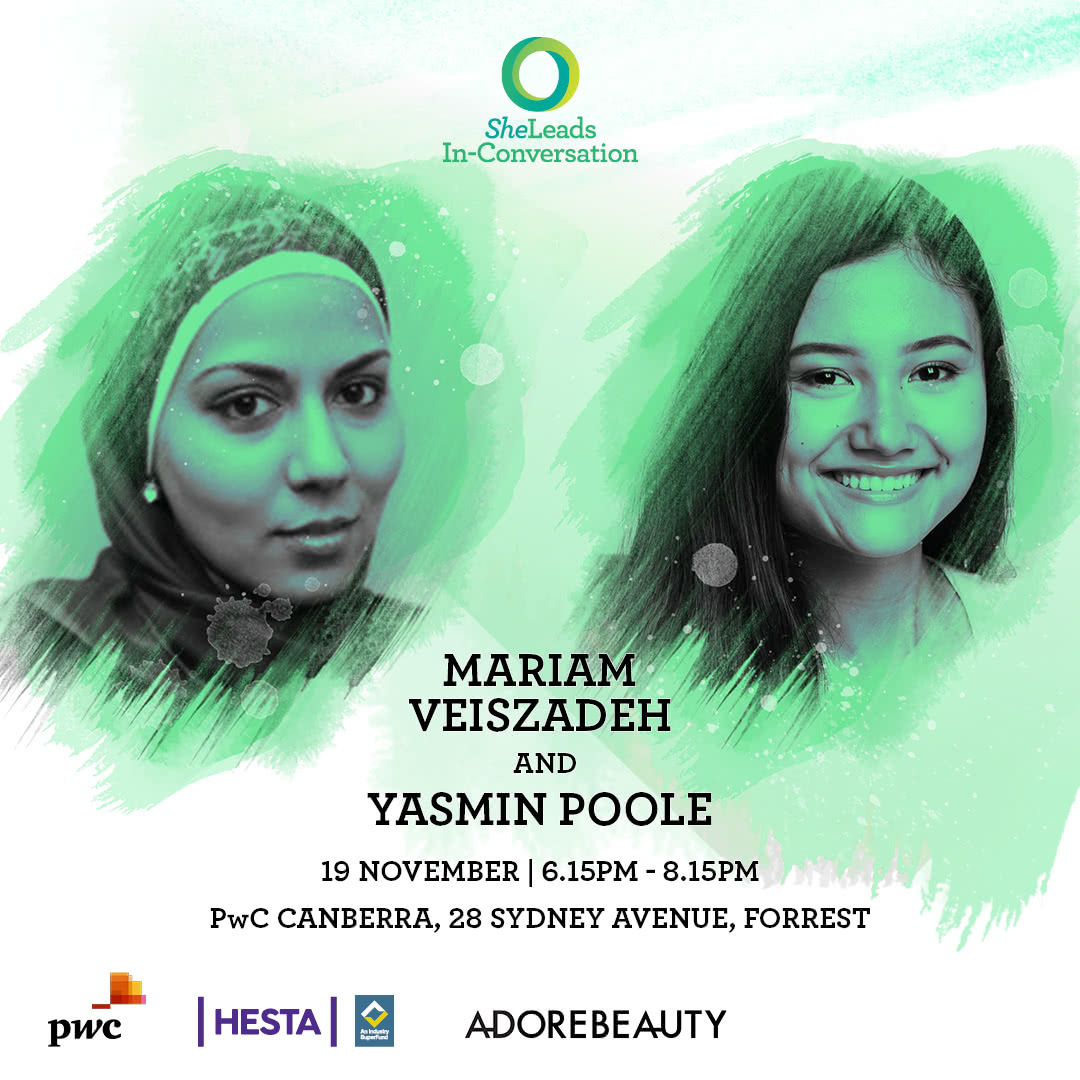 She Leads In-Conversation with Mariam Veiszadeh and Yasmin Poole

She Leads In-Conversation with Mariam Veiszadeh and Yasmin Poole

Join us on Tuesday 19 November to hear from Mariam Veiszadeh in conversation with Yasmin Poole.

This candid conversation will centre around Mariam’s personal journey as a Muslim woman and leader, including her experiences migrating to Australia at age seven. Mariam will discuss her pathway to becoming a lawyer and Diversity and Inclusion Consultant, alongside her ongoing advocacy work to create equal opportunity and inclusion for all including her tireless work to eradicate racism and discrimination in the corporate sector.

Mariam Veiszadeh is a lawyer, diversity and inclusion consultant, author, and social commentator. A fearless advocate, Mariam has for the past decade championed the rights of minority groups in an endeavour to normalise ‘difference’ or – as she sees it – normality. Mariam has a long list of accolades including Westpac’s Woman of Influence Award 2015, Fairfax’s Daily Life Woman of the Year Award 2016, and Role Model of the Year & Woman of the Year at the Australian Muslim Achievement Awards in 2015. Mariam sits on the Board of Our Watch, a national organisation established to drive nationwide change in the culture, behaviours and power imbalances that lead to violence against women and their children. In 2017, Mariam addressed an audience of approximately 4000+ in her TEDx Sydney talk to shed light on the issue of societal privilege and how it creates an unequal playing field for diverse minority groups. She successfully mounted the case for why cultural diversity targets are required to help create more of a meritocracy and stamp out racism and discrimination in the corporate sector.

Yasmin Poole is best described as a ‘human megaphone for Gen Z’. She has represented millions of young Australians in advocating for youth policy reform, including being the 2018 Chair of the Victorian Government’s Youth Congress. She also led the global business development of 180 Degrees Consulting, a youth led social impact consultancy that spans across 30 countries. She is currently Plan International’s Youth Ambassador, focusing on engaging young Australian women in politics. This year, Yasmin was the youngest member of the Australian Financial Review 100 Women of Influence and Top 40 Under 40 Most Influential Asian Australians. Yasmin has been a panellist on shows such as Q&A and the Drum, with a focus on how we can include youth in the conversation to create change.

She Leads In-Conversation events aim to provide the community with the opportunity to hear from women leaders from different backgrounds and industries, in a conversational format, followed by a live Q&A session and networking. Men are actively welcomed to attend.

The cost is $30 for YWCA Canberra members and PwC staff and $45 for non-members.

What does your ticket include?

YWCA Canberra believes that all women should be paid for their work. As a result, the cost of your ticket price also ensures that we are able to continue to pay our speakers.

So, gather a couple of friends and colleagues, and purchase your ticket now!

Photographs will be taken at this event. If you do not wish to have your photo published, please contact the She Leads team at sheleads@ywca-canberra.org.au.

Subscribe to the monthly She Leads Newsletter to receive updates about future In-Conversation events.