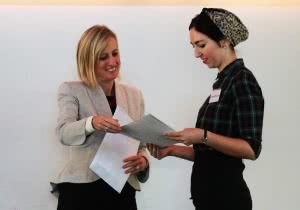 In April this year I was fortunate to receive a Great Ydeas grant from YWCA Canberra, to attend a conference on queer femme identity – the Femme Hive Conference in Berlin.

I am currently undertaking a PhD at the Australian National University with a focus on femme subculture, and the conference provided me with an opportunity to meet people connected to my field of study within an international context.

Unfortunately once the grants were announced I received some negative coverage in a local Canberra magazine, which questioned the value of my project. I was thankful that YWCA Canberra was swift to respond and defend not only my opportunity to develop professionally, but also the value of talking about queer femme identity in the first place.

Femme is a rarely discussed subculture that exists within a broader spectrum of queer communities. The term first came to popular usage during the 1940s-1950s, when butch and femme lesbian bars started to become more visible, particularly in the USA. Since this time, femme has become uncoupled from butch, as a standalone identifier that doesn’t require butch as a counterpoint. Since the early 2000s, queer communities have begun forming solely around the identifier femme, growing in numbers across the Western world. Australia has several groups, including the Sydney Femme Guild and the Canberra Femme Collective.

My own PhD research has involved interviewing femme-identifying people from Canberra, Sydney and Melbourne. Though femmes come in various shapes and sizes, my research has found that in general femme identity involves reclaiming feminine gender presentation/appearance. As such, one significant issue for many femmes is visibility, as feminine presenting queer women are often read as straight within both queer communities and society at large. The insidious norms of gender presentation that play out within queer communities and society, lead to femme experiencing many issues around identification, presentation and belonging.

The conference that I attended was community run and organised and, in comparison to an academic conference, Femme Hive offered the opportunity for me to talk with people who were involved with femme subculture on the ground. I was able to present the findings of my research at the femme conference that I attended, and was able to access invaluable feedback about the resonance of my findings with femmes living in Europe. I had prepared my paper before I left, but after I arrived I went back through my work and made it more accessible to a general audience.

Given that the conference was held in Berlin, with many people travelling from across Europe to attend, the workshops were held in English but this was a second language for many people. This language issue made me extra-sensitive about the academic language I used in my paper, and by the time it came to present I had made my talk much clearer and more interactive. It was a great process to go through for conveying my work to a general audience, and was an unexpected bonus of attending a community-run conference!

Overall my trip to Femme Hive has made an extremely valuable contribution to my research – it has extended my understanding of the subject of femme identity, allowed me to develop my academic skills and strengthened my confidence in pursuing this research area. I am very grateful for YWCA Canberra’s support of my undertaking the trip, and broadening my research horizons.
You can find more of Hannah’s writing at her blog Binary This or follow her on twitter @binarythis. Hannah will be presenting a public seminar outlining some of her research on femme identity at the ANU in early 2015. Stay tuned for more details.