With bush fires, hail, a plague, and everything in between, it has been one challenging year, to say the least. More so for our young people, who have had to adapt quickly to so many challenges including online schooling and missing out on social events with their friends!

YWCA Canberra could not think of a more ironic theme than Masquerade for this year’s LGBTQIA+ Allies Prom, after all we are battling a pandemic. After watching ACT Government COVID-19 updates like a hawk, the YWCA Canberra’s Youth Programs pulled together the fifth Annual LGBTQIA+ & Allies Prom in record time, ensuring 165 young people had a night presenting as their authentic selves and (thankfully) being able to dance the night away. 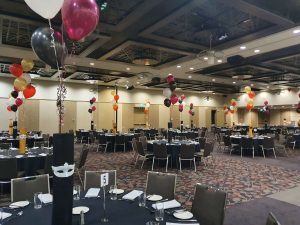 Young people devoured the lolly bar, took over 300 photos with the unlimited photo booth, were dazzled by two dance performances and were graced by an amazing band to open the event!

Fabulous room decorations, a two-course meal and a DJ spinning tunes brought the whole event together.

“Now in its 5th year I can say with pride that I have been a part of the LGBTQIA+ & Allies Prom for four years, both as an attendee and on the committee for the prom. I have seen it grow and only become more and more amazing every year despite, after every prom, thinking how could this get better? The amount of care and consideration that goes into the event both by the staff who volunteer to run it and by the young people themselves never fails to impress me.

This year I was asked to do the Acknowledgement of Country; as a Wiradjuri brother boy this was a huge honour. My identities intersect constantly, sometimes it can feel like I am not enough of one or the other. But being able to stand up in front of nearly 200 young people and both declare my respect and pride for my country and my elders and reflect on my identity was an experience of both fond reflection and hope for my communities.

This was such a tough year for our LGBTIQ+ young people, how the isolation from friends and found family affected us. I saw firsthand through this event the strength and resilience our young people have. From an older young person’s perspective, I experienced both being able to celebrate a coming of age event that many of us did not get to experience in our own schooling years. But also see the younger attendees continue to grow and celebrate the fruits of the progression of society, but never stop fighting for equality and acceptance.”

We would like to thank the ACT government as well as the generosity of the Canberra community to ensure that the younger LGBTQIA+ community are able to present as their authentic self. The word around town is that the sixth annual LGBTQIA+ & Allies Prom is going to be the best one EVER (spread the news).