Five key takeaways from this year’s She Leads events

The She Leads program is a leadership pathway for women, including female-identifying and non-binary people, who are looking to explore and develop their leadership potential.

For those of you who were unable to attend all the events (there were a lot of events!), or for those who simply want a refresher, we have compiled a list of five key takeaways from She Leads 2019 below.

1. Storytelling is a powerful tool to create social change

At the She Leads Conference, keynote speaker Deborah Cheetham OAM, Yorta-Yorta woman and founder of Short Black Opera explained to us that Indigenous people have been using storytelling through singing, costume and makeup for longer than any other civilisation. She told us that opera exists in order to amplify stories, which is why she founded Short Black Opera, a national Indigenous not-for-profit company specialising in training and performance opportunities for Aboriginal and Torres Strait Islander performing artists. Deborah acknowledged that sometimes the telling of Indigenous stories incorporates violence and trauma, however, this helps people to empathise with the experiences of others. Deborah told us that one of the biggest barriers to enacting change and creating a more equal society is through appealing to people’s humanity.

Which leads us to…

2. Being a good ally requires showing up, especially for marginalised people 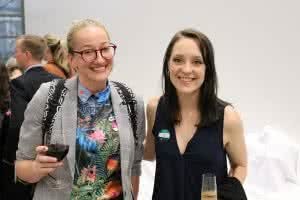 At our first In-Conversation event for the year with LGBTIQ activist, Sally Rugg, we learned the importance of appealing to people’s humanity, something which saw a great success for Sally who was able to use this tactic in the Marriage Equality vote. Sally told us that a key strategy was to “incorporate language such as, ‘this could be your brother, your sister, your son and so forth…’”

Sally emphasised how she believed that although this is something that shouldn’t be necessary, it was a strategy that worked to increase the number of allies who then took the cause on as their own.

However, Sally also highlighted that we need to mobilise that same connection for genuine allyships with marginalised people and for reconciliation with our First Nations people. She told us that broad allyship should not just be because it affects someone close to us, it should be because it affects another human being.

3. If you’re receiving some backlash from the work you’re doing, you’re doing something right

At the She Leads High Conference proud Muslim woman and the Deputy Chair of the ACT Multicultural Advisory Council, Sandra Elhelw Wright, told us that it can be difficult being a changemaker. Sandra explained how she sometimes receives criticism that her PhD on the topic of domestic and family violence in Australian Muslim communities singles out minorities. She had also received criticism from the wider community, and even from her own family to articles she had written on the topic.

Despite this, Sandra told us that she found the value in being able to change someone’s mind when it seemed otherwise impossible. She said it was good to acknowledge the small things like knowing that she had started a conversation and providing someone with a different point of view.

Marina Go provided us with some practical advice during her keynote at the She Leads Conference, telling us that success doesn’t just happen based on a dream. Marina encouraged us to plan our careers and leadership pathways like we would plan a business, making sure to have a goal in mind and measures of success along the way.

Marina told us that hoping for a lucky break isn’t a strategy however we need to be flexible within our plans, make sure to turn roadblocks into opportunities. She told us to say yes to exploring every opportunity, even if at first it would seem like an unlikely opportunity because we never know where it might take us or what contacts we might make.

5. You can’t work in isolation when you want to want to make change 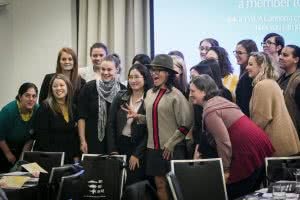 Throughout the year, across seven varying She Leads events, many our speakers highlighted the importance of a support network.

At the She Leads College Conference, Renee Songoro proud Saibai – Zenadth Kes woman and Co-Founder of National Indigenous Youth Education Coalition, told us that being a changemaker and leader requires support along that way and that it’s important to take care of ourselves when dismantling power structures.

Zakia Patel, Unit Commander for the Queanbeyan SES Unit told us during her panel at the She Leads Conference that our biggest downfall could be thinking we can do it all by ourselves. She said her main advice was for us to build ourselves a support network or system because we cannot do it on our own.

Marina Go ended her Conference keynote by telling us that, in order to make change and to be a good leader it’s important to give back and assist the women who are coming up behind you. She told us that her idea of success is when a woman you mentor can use your success to pull herself up. She said this is important as we need as many women to do this as possible in order to fill the quota of leadership roles that would achieve gender equality.

Want to be inspired, gain practical leadership advice and transform power structures with us in 2020? Stay tuned for an exciting line up of women and non-binary leaders, disrupters and changemakers by subscribing to our She Leads Newsletter.

You can read the previous article in this series here.