On Friday 24 November, YWCA Canberra Executive Director, Frances Crimmins addressed the Department of Industry, Innovation and Science White Ribbon Day morning tea. Each year White Ribbon Day coincides with the start of 16 Days of Activism for the elimination of gender-based violence on 25 November.

Below is a transcript of Frances’ speech which includes a strong call for the community to tackle violence with primary prevention initiatives. There is a strong focus on the importance of education informing young peoples’ views on equal and respectful relationships. 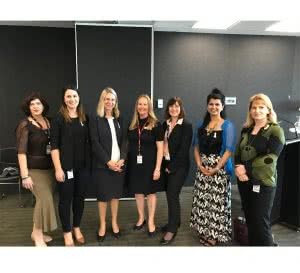 Thank you to the Women’s Network team and the Department of Industry, Innovation & Science for inviting to me be here, and thank you all for taking the time to come together on this important day.

Before I continue, I need to acknowledge that in a gathering of this size, there will be survivors of domestic, family and sexual violence. I hope that you will all find my contribution to this conversation to be respectful, constructive and representative of the issue. I would like to remind anybody in need of support to contact 1800RESPECT.

I would also like to make it clear that I acknowledge that men are also victims of violence, and at times the perpetrators are women. However, it cannot be denied that violence is overwhelmingly a gendered issue, and that women are significantly more likely to experience domestic, family and sexual violence than men.

Here in front of you, I present as a white, affluent middle-aged woman. I have a safe home to live in, I have two healthy children, a loving partner, and wonderful friends.

But the same cannot be said for thousands of women in Australia, and across the world.

Women and girls continue to face discrimination on a daily basis. We live in a society where we are not paid equally for our work, where many of us are the victims of harassment or assault, where our voices are not acknowledged, and our contributions are overlooked and undervalued.

Earlier this year, we heard the devastating findings of the Human Rights Commission’s Change the Course report, which confirmed that more than half of all Australian university students experienced sexual harassment on at least one occasion last year.

Just last week, the Workplace Gender Equality Agency released Australia’s 2016-17 gender equality scorecard, which showed us that the gender pay gap is still 22.4 per cent, which means that men are still taking home an average $26,000 more than women each year. The report also found that pay gaps still exist in every industry and occupation.

All of these factors severely compromise women’s resilience in later life. Single older women now represent the fastest growing cohort facing housing insecurity and homelessness. For many, this is a direct consequence of taking on caring roles for children and family members, wage inequalities, less secure work tenure, and insufficient superannuation.

We can’t meaningfully address men’s violence against women while we continue to reinforce the notion that men should have power and control, and women should nurturing and subservient. Gender stereotypes have a negative impact on society,both on women and men. This feeds into to the overt and insidious sexism that women experience on so many levels, every day.

Sadly, many women continue to face death threats, rape threats, and violent outbursts on social media, simply for voicing their opinions. Earlier this year, we watched on with horror as public advocate and former Queensland Young Australian of the Year, Yassmin Abdel-Magied became the victim of extreme online abuse. This incident came about after Yassmin posted a Tweet on ANZAC Day that reflected her feelings about the current Australian social and political climate.

The aftermath of this innocuous post saw her face a tirade of extreme online vilification for months thereafter. Our senior politicians publicly condemned her, and thousands of people told her to “deport herself”, “kill herself” and worse. She lost her role as a presenter at the ABC, and was no longer invited to speak at public events.

Yassmin described this experience as ‘deeply traumatising, frightening and isolating’. Her story is just one example of the pervasive culture of sexism and prejudice that still exists here in Australia.

November 25th is the start of 16 days of activism to eliminate all forms of violence against women. White Ribbon Day is an opportunity for men to stand up and recognise the responsibility and accountability of this call to action.

We already know the stats, which tell us that on average, one woman is killed by a partner or former partner in Australia every week, and that young women, women with disabilities, and Aboriginal and Torres Strait Islander women experience violence at a higher rate than any other demographic. We know that 43 Australian women have been killed this year, and 76 women were killed in 2016.

We must call out unacceptable behaviour, challenge everyday sexism, and break away from the detrimental societal views on the roles of men and women.

We need to address gender inequality in our workplaces and institutions, and within our own peer groups and social circles. We need to look at the way that women are portrayed in sport, media, films and other pop culture and entertainment, and reject the harmful gender roles and stereotypes which make it impossible for us to truly achieve gender equality.

This is not just about improving the status of women and girls. Gender equality benefits everyone in our community.

I am optimistic about the potential for accelerating progress towards a truly equal society in the future, and I believe that in our lifetimes we can eliminate violence against women.

YWCA Canberra has developed some solutions under the banner of Respectful Relationships. Our Respect Ed programs aim to give young people the tools and support to develop, promote, and perpetuate equal, safe and respectful relationships, with the ultimate goal of preventing violence against women and girls.

Gender equality needs to be instilled from an early age through our schools, while young people are forming their values base, attitudes and behaviours. In recent years, YWCA Canberra has strongly advocated for long-term, adequately resourced primary prevention initiatives in all schools and colleges in the ACT. We’re not there yet.

I invite you to join YWCA Canberra in its call for a focus on best practice, evidence-based, community-wide primary prevention initiatives, to stem the tide of violence against women.

Find out more about YWCA Canberra’s Respect Ed programs on our website.