Great Ydeas – Where are they now with Chiara Grassia

Great Ydeas is YWCA Canberra’s small grants program, providing up to $2,000 to women to help kickstart a great idea for a business, community development project, or to support professional development or education and training opportunities. Applications for the 2017 Great Ydeas program are open until March 30, and to celebrate, we’ll be featuring some of our amazing past recipients over the next few weeks to highlight what can be achieved through the program.

Chiara Grassia received a Great Ydeas Grant in 2015, and went on to launch the first Girls Rock Camp in Australia, Girls Rock! Canberra in January 2016. Here, she talks about how the grant supported both the research and implementation phases of her project, and how the Girls Rock program empowers girls through leadership opportunities, self-expression and community support. 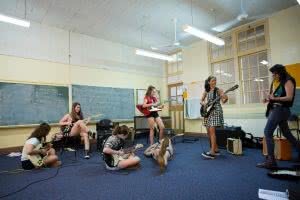 Tell us about your Great Ydeas grant and what it enabled you to achieve?

In 2015, I received a YWCA Canberra Great Ydeas Small Grant to help me travel to the US to research Girls Rock Camps, aka my favourite place in the world. Girls Rock Camps are week-long programs designed to empower girls, trans and gender non-conforming youth through music education, with an emphasis of encouraging self-expression and fostering self-confidence.

Over the course of the week, attendees at Girls Rock Camps form a band, learn how to play an instrument and write an original song to be performed at a public showcase at the end of the week. They also attend creative workshops which range from songwriting to screen printing band t-shirts.

These programs are independently run, united by shared values and structure, and originated in the US in 2001 – they’ve since expanded worldwide but had yet to start in Australia. So I started one. In Canberra.

The grant allowed me to travel to the USA in June-July 2016 to volunteer at three Girls Rock Camps (Girls Rock Austin, Texas; Bay Area Girls Rock Camp, California and Rock n Roll Camp 4 Girls, Oregon) in preparation for developing my own program, Girls Rock! Canberra (GR!C). While I had previously volunteered at RnRC4G in Portland, attending camps in different cities was extremely helpful in understanding how the structure can be adapted to suit a local context. In particular, this opportunity allowed me to connect with other Girls Rock Camp organisers and mentors, strengthening a support network that has been a vital resource during the development and deliverance of GR!C.

Since receiving the grant, I organised and ran the first Girls Rock Camp in Australia, Girls Rock! Canberra at Ainslie Arts Centre in January 2016. The response was really overwhelming and amazing – we had participants and mentors from all over the country, including Courtney Barnett, Steph Hughes (Dick Diver) and photographer Mia Mala McDonald. Since last January, two other Girls Rock camps have been established in Brisbane and Melbourne and have each run their first program, and there are plans for others all over the country! It’s so rad to be part of this movement. 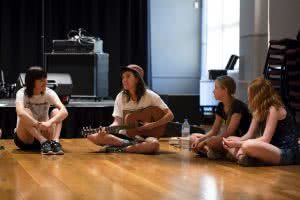 Don’t be afraid to ask questions, reach out (I’m a big believer in the polite e-mail) and take notes.

Do it! Writing the grant proposal helped me to flesh out the various elements of the project, and helped me articulate and validate why this research period was crucial in developing the program. I also found the process of writing the grant proposal useful in thinking about how the grant could support a stage of the overall project, which I think is a helpful way to approach this grant.

Girls Rock! Canberra will run again this year at Ainslie Arts Centre from the 10-15 July. This year, along with the usual guitar, bass, vocals and drums instrument instructions, we are adding an electronic music/DJ/beats-making class which I’m pretty excited about. We’re also working on strengthening the structure of the program so that it can continue to run annually.

Applications for the 2017 Great Ydeas Small Grants program are open until 30 March. Visit our website for more information on how to apply.