Great Ydeas is YWCA Canberra’s small grants program, providing up to $2,000 to women to help kickstart a great idea for a business, community development project, or to support professional development, education or training opportunities. Applications for the 2017 Great Ydeas program are now open, and to celebrate, we’ll be featuring some of our amazing past recipients over the next few weeks to highlight what can be achieved through the program.

Erin-Claire Barrow is a 2016 Great Ydeas Grant recipient, and a skilled writer and illustrator. Her ‘Feminist Fairy Tales’ project challenges us consider how we think about gender, and aims to increase the visibility of traditionally under-represented characters in these well-loved stories. Here, she talks about how the grant has helped her to bring the project to life.

In March 2016, I was fortunate to be one of seven women awarded a YWCA Canberra Great Ydeas grant. I was so excited, as this grant would allow me to make my ‘Feminist Fairy Tales’ project a reality. The project will see me retell five traditional fairy tales with a feminist twist, illustrate them with detailed watercolour illustrations, and publish them as a book.

As an artist who loves illustrating fairy tales and folklore, who often uses illustration for activism and social justice, and as a staunch feminist, this project is something that has been close to my heart for a long time. Growing up, I read various versions of re-imagined fairy tales, but I felt there was still a big gap waiting to be filled. Women are diverse, women are strong, creative and capable. I wanted more fairy tales where the central female characters were active, not passive, could save themselves and determine their own futures, and importantly, were much more diverse. Women from European fairy tales are almost always either shown or implied to be white, straight, young, beautiful, able-bodied and cis. I thought there was more here to explore, and I wanted to retell and illustrate five of my favourite fairy tales with an intersectional feminist twist. My Great Ydeas grant meant I was able to do this.

The funding I received from YWCA Canberra has supported many different phases of the project. To date, it has enabled me to buy materials to draw and paint the illustrations, and very importantly it has enabled me to pay several editors for the fairy tales. These editors were diverse, with different backgrounds and experiences to me, and were invaluable in bringing a new perspective to the fairy tales, and making them more intersectional and more inclusive. 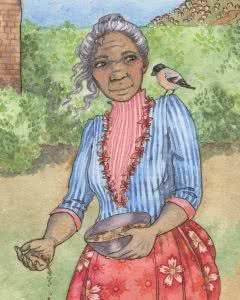 The remaining funding is earmarked for creating a book of the fairy tales once all the illustrations are complete. It will assist me with the costs associated with publishing, launching and publicising the book, which I hope to do early this year.

So far, I have reached several key milestones within the project. I have chosen five traditional stories to retell – The Princess and the Pea, Cinderella, Allerleirauh, Beauty and the Beast, and Rapunzel – and I have finished writing them and almost finished editing. I have tried to keep the stories quite true to the original fairy tales, but this means the writing and editing process has certainly thrown up some odd conundrums. For example, is the way the Beast asks Beauty about marriage every evening an essential element of the story? Is it sexual harassment? Or is it both?

The illustrations and sketches are complete for several fairy tales, and The Princess and the Pea has been published in full online. You can download a PDF version, which can be read by ebook readers, here.

This grant has done so much to assist me in reaching my potential as a writer and illustrator. It has given me freedom to explore a theme and project I am passionate about, and improve my illustration skills through working on an ongoing project. It has meant I always know I’m going to be able to afford the materials I need to keep painting, and I can learn new skills, for example in publishing and publicity.

It has been great to hear feedback on the fairy tales from people who have enjoyed reading the one that is already available online, and from my editors who have read them all. At this point, the impact this project has made on the lives of women is limited, although people have said how important the representation and agency of the Princess is in The Princess and the Pea. I am hoping once the book is published it will have a much wider reach and larger impact on the lives of women.

I have learnt a lot as I go through this project, and expect to learn much more! My painting technique has changed and improved, and I’ve learned a lot about writing – especially about keeping the balance between a fairy tale style and something that a wide variety of modern people can relate to. I’ve learned, or perhaps had reinforced, that projects always end up bigger and taking more time than you originally think they will, but that this is not necessarily a bad thing because it’s often a sign that you’re improving them as you go. With the Feminist Fairy Tales project, I originally intended to do more than half the illustrations in black and white, but early on, I had to rethink this plan because I didn’t think the black and white ink drawings were as eye-catching as full colour watercolour paintings.

From here, my goal is still to finish the remaining illustrations, and then publish a book. I am planning to have a crowdfunding campaign to begin with, which will give me some idea of how big the demand for the book is likely to be. You can follow me on social media or sign up for my newsletter to see illustrations as they are finished and to find out when the crowdfunding campaign is launched.