Great Ydeas – Where are they now with Kate Butler

Great Ydeas is YWCA Canberra’s small grants program, providing up to $2,000 to women to help kickstart a great idea for a business, community development project, or to support professional development, education or training opportunities. Applications for the 2017 Great Ydeas program are now open, and to celebrate, we’ll be featuring some of our amazing past recipients over the next few weeks to highlight what can be achieved through the program. 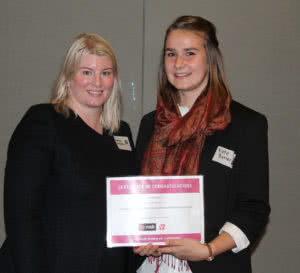 Kate Butler with Sandra Anderson, from NAB at the 2016 YWCA Canberra Round the World Breakfast.

Kate Butler is the 2016 Great Ydeas NAB Innovate Grant recipient. Her project, ‘Enrol for Change’ (E4C), is an advocacy body which was designed to promote democracy and encourage young Canberrans to enrol to vote prior to the 2016 Australian federal election. Here, she talks about how receiving the grant supported her to do so.
___

At the time of the 2013 Australian federal election, 400,000 young Australians were not enrolled not vote, making up half of the unenrolled population. Their absence on Election Day drastically impacts how our Australian democracy functions, as their opinions are not represented in our highest level of government. Moreover, not only were so many people not enrolled, but so many of these people were young Australians who, arguably, are those most affected by Government policies and decisions.

In February 2016, in the lead up to both the ACT and federal elections, my friend Gina Zheng discussed this issue with me and we decided to create an advocacy body aimed at increasing the number of young Australians who were enrolled to vote. Eventually, we settled on the name ‘E4C – Enrol For Change’, a name we thought captured the essence of our aim: to encourage young people to enrol so that their opinions translate into real, democratic change. The body was strictly non-partisan; whatever a young person’s beliefs, we thought it was important they were heard.

Relatively soon into planning our project, we realised that we would be able to achieve our aim much greater and more efficiently if we received funding. We decided to apply for the YWCA Canberra Great Ydeas Grant, which each year awards funding to projects created by young women in Canberra. Astonishingly, we were awarded the NAB Great Ydeas Innovate Grant, which provided us with more than enough funds to carry out our project.

Attending the YWCA Canberra Round the World Breakfast to receive the grant was both a humbling and inspiring experience. I greatly enjoyed meeting other recipients of the Great Ydeas grants, who were inspiring women who are doing fantastic things for women in our Canberra community. It was also a fantastic opportunity to meet the people from NAB, who so generously funded the grant. Their advice proved invaluable, as they provided us with both financial advice for managing our grant money and social media training to ensure that our Facebook page was as effective as possible. The partnership between NAB and YWCA Canberra allowed our project to reach far more people than we would have otherwise and the training has allowed us, as young female students, to gain more confidence in our skills and abilities. 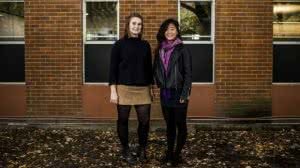 As Gina and I both study and live in Canberra, we decided to focus our efforts here, using connections and resources throughout the Australian National University and the wider Canberra community. Over the course of the campaign, we coordinated and trained volunteers to speak at various ANU residential halls and we worked in collaboration with the Australian Youth Climate Coalition and Oaktree to hold enrolment stalls on-campus. We also ran a successful social media competition across Facebook. The effects of these wide range of campaign initiatives worked to simultaneously raise awareness of the importance of upping the youth enrolment, as well as directly enrolling young persons, in doing so bridging any barriers to enrolment.

The enrolment campaign reached over a thousand people through online and in-person initiatives, as well as directly enrolling over 50 people as well as receiving public coverage by Australian Fairfax Media, which further raised the profile of the importance of youth enrolment and aiding in placing youth enrolment at the forefront of the media in 2016.

The reach of the campaign could not have been achieved without the pastoral and financial support from the team at YWCA Canberra and NAB – the assistance of the organisations came not only from their funding support, which greatly aided our ability to grow the campaign, but also from the extensive advice and words of support lent from the organisations. We are greatly appreciative of all of their support and thankful for the fantastic work they do for the women in the Canberra community.