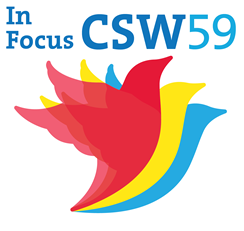 In a very big tick to my bucket list, I will be attending the 59th session of the Commission on the Status of Women (CSW) at the United Nations (UN) in New York from 6 to 21 March as part of the YWCA Australia delegation. The YWCA  Australia  delegation is part of a larger group of delegates from YWCAs from all over the world. Civil society participate alongside UN member states to influence, advocate and inform.

In a departure from previous CSW meetings , this year the UN released at the end of January a draft declaration  titled the Political Declaration on the Occasion of the Twentieth Anniversary of the Fourth World Conference on Women (  known as the Zero Text). The intention is to negotiate the text before CSW to have it adopted on the Monday of the first week. The World YWCA and the  Women’s Human Rights caucus have been proposing changes to it.

The YWCA raised its concerns that by seeking negotiation prior to CSW they are denying women around the world a voice, indeed, several counties and country blocs announced they were simply not ready to express a view. It has been insightful to see the sorts of requests for changes to the text, as every word is so laden with meaning. Getting to see UN speak in action in all its nuance!

Timelines for comments are ludicrously short, and trying to find a time when all YWCA delegates are awake and have time to reflect, consult and comment has proven difficult, so comments are often made by email and collated.

A Zero Draft of working methods is also being worked on. This will set the ways of working at future CSWs.

This change in tack has led to the Y needing to be very agile (as we well know it can be!). The advocacy sheets developed in the past are no longer needed and the preparation has gone in a different direction. What has been clear is the amazing skills the Y has at its disposal- seeing people pull together outstanding proposals for parallel events to be delivered in the first draft, seeing the World Y in action from all corners, bringing truth to the feeling that we are all together as a worldwide movement, even if we have never met, due to all being Y members.

I am keen to see how the discussion on the gender dimension of the Post 2015 development framework unfolds once on the ground, watching the alliances of women’s organisations in civil society advance has been impressive. Having our parallel event proposals accepted has been a highlight so far. I will be sending updates from New York to YWCA Canberra for their Facebook and Twitter feeds with a full report on my return. Meanwhile consider applying for next year’s delegation yourself!

Jane will be keeping us updated on the CSW and YWCA Australia’s activities. Keep an eye on our blog for more!