Hidden women in the spotlight

For one week every year, in the middle of the Australian winter, the issue of homelessness and housing stress features heavily in public conversation.

National Homelessness Week runs from 6-13 August and this year’s theme is ‘Ending Homelessness Together’. It is typically a week of campaigning by community stakeholders and legislators to bring attention to the plight of more than 116,000 people who are homeless in Australia and to maintain the momentum for change.

Canberrans are fortunate to live in an inclusive and tolerant city, with an educated workforce and high average incomes. Ours is a city that we can be proud of in many ways. But this standard of living masks very real inequalities that exist below the surface of our city.

To coincide with National Homelessness Week, YWCA Canberra is launching a mini-documentary titled Hidden Women that explores one such inequality; the experiences of single, older women who are homeless or in insecure housing. 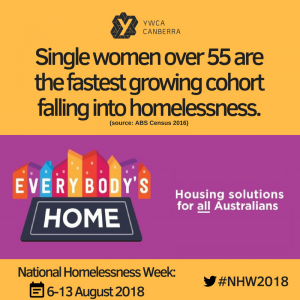 These women are hidden, and their plight often goes unnoticed, even during National Homelessness Week, because they do not neatly fit into assumptions about homelessness.

After decades of wage and superannuation inequality, compounded by a disproportionate amount of time in unpaid caring roles, older women can often find it hard to manage when relationships go awry, when domestic violence forces them from their homes or when their spouses pass on.

Out of shame and fear their situation becomes hidden; shame that after a life of conventional housing tenure and caring for others they now find themselves dependent on others for shelter and fear for their safety when they are forced onto the street or into emergency shelters.

The confluence of these life events often mean single, older women are forced to “couch surf” or find shelter in their cars, away from public view.

YWCA Canberra has a proud history of providing housing support through our supportive tenancy services. Our houses for older women, including those who feature in Hidden Women, provide an innovative solution to women who fall through the cracks in traditional housing models while providing them with an immediate support network.

The women who bravely feature in Hidden Women will be familiar to many of us; they could so easily be our grandmothers, mothers and neighbours. What I believe Canberrans will find most striking is how everyday their stories are.

Hidden Women is a timely reminder of how structural and institutional sexism can have consequences, most particularly toward the end of our lives. And it is also a reminder that deficits in housing policy and service design as well as generational inequalities around income and superannuation are all part of the complex web that can lead to homelessness amongst older women.

Ending homelessness together, as we are urged to do during this National Homelessness Week, requires consideration of all these factors as well as input from across the community and government.

YWCA Canberra continues to call for a national action plan to address older women’s homelessness and housing stress as well as the underlying causes of their economic inequality.

Because until we identify and correct the fundamental causes of structural inequality, from childhood to retirement, we will continue to consign Canberra women to a life of financial and service based discrimination that catches up with them when they are most vulnerable.#NWH2018 #NWH2018 #NWH2018