Nas’ story is the latest of our series profiling women participating in the annual She Leads Conference in Canberra on 1 August, as part of an inspiring day of discussion, networking and action on women’s leadership.

Women’s Agenda is a huge fan of this event, and is supporting it once again as an online media partner by sharing insights, advice and stories from some of the awesome women involved. 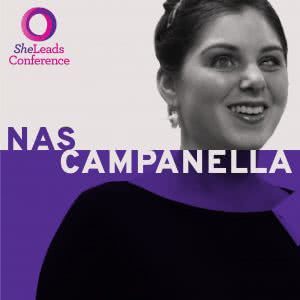 Nas Campanella is on a mission to break down the barriers to social inclusion. When the Triple J journalist and newsreader first joined the ABC in 2011, she was the broadcaster’s first cadet journalist who is vision impaired. Campanella also has a genetic neurological disease called Charcot-Marie-Tooth, which causes a loss of sensation in her fingertips, making her unable to read braille.

However, this has not stopped her landing her dream roles as a newsreader and travel writer. In the years since, Nas has also become a strong voice for inclusion and accessibility, particularly for people across the disability spectrum, starting in the workplace.

When asked what can we all do to better support diversity in the workplace, Nas says “creating a truly inclusive workplace means overcoming three key barriers: physical, environmental and attitudinal…Often though, negative perceptions of people from diverse backgrounds can be the most difficult barrier to overcome.

“Leaders can also set an example by providing positive opportunities for people from all walks of life to learn, develop and thrive.”

Campanella said that she partially attributes her success to the support and role models she had while growing up and forging her career path. She says she’s grateful to be in a position where she can now pay this forward.

“From a personal perspective, being a woman with a disability in the media has also led to speaking engagements and opportunities to work as a mentor, which is something I’ve always wanted to do… It’s wonderful to be able to now give back and act as an advocate for others with disabilities.

“I think having mentors in both your personal and professional life is so important. I’ve got friends who I look up to as role models because they continuously challenge themselves, and in turn, me. My work mentors always give me constructive criticism, provide career advice and pick me up when I’m down. It’s those ongoing little things that have made the difference.”

On leadership, Campanella describes her style as adaptive, and says that her approach is usually guided by the circumstances at hand.

“At work when a deadline is looming, and stress levels are high, I become quite the authoritarian. When you need to get on air in minutes you need to be in control and tell people what you need to reach that goal.

“Generally though, I take a very democratic approach. I think it’s important to encourage innovation, support new ideas and always motivate each other. I’m a firm believer that in a group there’s never just one leader.

“Everyone has different strengths and talents and good leaders will elevate and inspire all team members. Someone who is authoritarian all the time can be ineffective because they might find it hard to gain the team’s respect or adapt to different situations.”

One key strength Campanella strives to impart to the women she mentors is self-advocacy; being clear and speaking up about what you want. She says for all women to reach equality and thrive, we need to create a culture where women feel confident to ask for and expect equal pay and conditions, flexible work arrangements and the same respect that is afforded to their male colleagues.

“I’ve always believed in the power of self-advocacy. Too often in life I’ve been told something might be too hard for me or had people worried about how I’d do things.

“I’ve learnt over time that if you want something you need to work for it and find a way to make things happen.

“In my capacity as a mentor I regularly run workshops with young women on interview skills, self-advocacy, public speaking and goal setting. It’s so important to encourage women to try harder, ask for more, push boundaries, and never be afraid to ask for help.”

If you want to hear more from Nas Campanella, register to attend the She Leads Conference 1 August at Rex Hotel Canberra here.