I got threats and insults from trolls just for doing my job. It happens to women all the time

This article was originally published on the ABC News website on 23 January 2019. It is republished here with permission from the author, Ashleigh Streeter.

Have you ever been told you’re a fat bitch? Been told to kill yourself? What about receiving a rape threat from a total

stranger — or worse — just for doing your job? 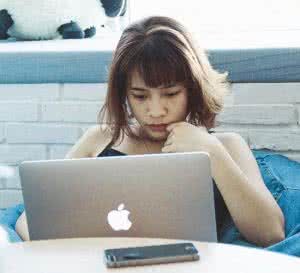 young women who campaigned with Plan International Australia on the Girls Take Over Parliament in 2017 — a great way to get more young women into Parliament, and eventually to improve the gender

“Your [sic] gonna ruin everything you stupid c**t get in the kitchen where you belong.”

“Any bitch tries to tell me what to do I’ll just hit them now f**k off slut.”

Before long, we were told to increase our privacy settings and change our names on our social media profiles, for our own safety.

The vitriol, death threats, rape threats and worse were pouring in. All because we dared provide an opportunity to level the playing field young women.

While I eventually changed my name back (mostly due to the confusion of my Facebook friends!), it made me think seriously about my online presence, my personal security and my future as an advocate.

If you ask any women with a high-profile public presence, particularly any who advocate for gender equality, chances are they’ll have a similar story to tell.

Activists exist in a dangerous space, particularly those who are female. To create the change we want to see, we need to be in the public eye, which today means being on social media, as well as more traditional public platforms.

It’s not just women. Organisations are increasingly stepping into the role of activists.

Last week, we saw the release of Gillette’s controversial advertisement “The Best Men Can Be”.

Watching it, I felt relieved and exhilarated.

It was such a relief to see a company — one owned by Proctor and Gamble, which has an enormous amount of capital, power and influence — standing up in the era of #MeToo and encouraging men to be better. Better for themselves, as well as for girls and women. They reinforced a message that I’ve been communicating as an activist for years.

The Gillette advertisement saw so. Much. Backlash. Around the world, men — and a few women — were outraged at the idea that men can and should be better. Forget the fact that the gender norms the ad was challenging are harmful for men — that they contribute to the high rates of male depression and suicide.

But whatever the backlash Gillette received, it pales against the vitriol hurled at female activists passionate about gender equality, which is much nastier, more aggressive and gender-based.

Before I began this article, I had a look back at my Twitter feed and articles I’d had published on equality. Scrolling through the comments, I felt sick.

Take this charming example: “If you don’t shut your mouth, I’ll shut it for you.”

It happens to so many others in my networks as well. At least once a week I get asked to support a friend who’s been attacked in some way, shape or form by a man. Engaging with a troll is exhausting, requires substantive emotional labour and never results in productive conversation.

The high-profile feminist writer Clementine Ford is plagued by trolls. She even posted one particularly disturbing email she received from a man — it was full of graphic insults, ending with a horrific explanation of how she should kill herself.

Equality is worth fighting for

The fact is, both men and women need gender equality.

There is no country which has seen the gender gap eliminated, which has eradicated gender-based violence or which has achieved gender equality for all (not just white women!) in their population.

A lot of the change that needs to happen relies on men stepping up and doing their bit. And gender equality activists are going to keep calling for it, because we all don’t deserve anything less.

Organisations can also help. We need them to help amplify our voices and set a moral standard. I’m part of a generation that cares passionately about social issues and I make my consumer choices based on organisations which share my values.

To my fellow advocates, thank you and stay strong. I’m sorry you have to put up with this — I’m right there with you, campaigning, advocating and blocking the trolls.

And to the trolls, you can fill us with dread and fear. You can hurl sexist attacks at our appearance, our opinions and our mission. But to that I say, thank you. Thank you for reinforcing our mission — for making the prevalence of dangerous sexist attitudes and need for gender equality so clear. Thank you for reminding us that we deserve better. And maybe watch that Gillette ad again, you might learn something.