In a massive new gig, Julia Gillard is helping to dismantle female leadership barriers in every field

Angela Priestley is the Publisher and founding editor of Women’s Agenda.

If you thought being the Prime Minister of Australia was a huge role, consider Julia Gillard’s latest job. 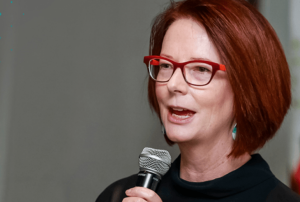 Our first female PM has been named the inaugural chair of the London-based Global Institute for Women’s Leadership, which aims to “create a world in which being a woman is not a barrier to becoming a leader in any field, nor a factor contributing to negative perceptions of an individual’s leadership.”

The GLWL’s ambitions are big ones, especially at a time when the World Economic Forum predicts we’ll now be waiting until the year 2234 before closing the gender economic gap, and when the presence of women on the global leadership stage is still rare — and open to sexism and pointless remarks about unborn children and appearance.

The Institute shares a number of stats that outline the massive challenges it’s looking to take on. Just 23% of national parliamentarians are female globally, while women make up just 26% of news media leaders, 27% of judges, 25% of senior managers, 15% of corporate board members and 9% of senior IT leaders.

Gillard announced her new role via her inaugural blogpost on the Institute’s website.

She says we’re living through an energising and “pivotal moment” for women, given the #MeToo response and the stories being shared on the career consequences women have suffered. “They shine a spotlight on just one of the barriers in what has been described as a ‘glass labyrinth’ of ongoing and unpredictable challenges faced by women in the workplace,” she writes.

“I think this metaphor is important in capturing the fact that the barriers to female leadership begin from the very start of women’s careers. It’s not just one high, hard glass ceiling at the top.”

Gillard writes that #MeToo has also arrived at a time of increased research into unconscious bias, as well as research finding women in leadership are held to different standards than men.

But she adds that while we’re getting better at describing the problem, there are still many roadblocks standing in the way of solutions.

“Many of the initiatives companies use to promote women’s leadership are not linked to evidence, and with some good reason – academic work is rarely available in a form accessible to those in decision making positions. This makes it harder for those who want to make change and provides cover for those who don’t. While the fight for gender equality is being waged across the world and by many players, the fragmentation of efforts stops us joining forces and accelerating change.”

These are the gaps the GIWL is aiming to fill, by building a network of practitioners and researchers that can help disseminate robust evidence regarding what is and isn’t effective in promoting gender equality.

“I know from my own experience of speaking to female leaders across countries with very different cultures and levels of development, that there runs a common thread of hostility to female power. And in all nations, women from communities at risk of marginalisation because of ethnicity, race, religion or poverty face even higher hurdles,” she writes.

Gillard also told the ABC’s Lisa Millar that while gender doesn’t explain everything about her time in leadership in Australia, it does explain some things and that the more time she’s spent out of politics, the more she’s been able to analyse her experience.

She added that she’s not disappointed at the treatment of global leaders like New Zealand’s new Prime Minister Jacinda Ardern, but rather frustrated by it — and that the more frustrated she gets, the more anxious she is about driving change.

“My predominant emotion is one of frustration — ‘aren’t we there yet, aren’t we better than this already’?

This article was originally published on Women’s Agenda, and has been republished here with permission from the author.