Intersectional perspectives on disability and LGBTIQ* identities and rights 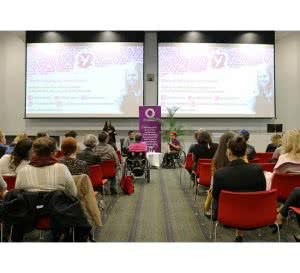 On Tuesday 8 May, we welcomed Jax Jacki Brown and Yen Eriksen to share their thoughts and experiences on activism, disability, human rights, the LGBTIQ* community, and equality. We selected Jax and Yen to share their thoughts and experiences with us because we take an intersectional and holistic view of leadership, that centres marginalised identities within a feminist framework.

Through discussing queer and disability rights, Jax and Yen both exposed many of us to new ways of thinking and understanding the experiences of others, and strengthened the voices of queer and disabled people to advocate for inclusivity and equality.

Yen opened the evening by welcoming us all, and made a moving acknowledgment of Country. YWCA Canberra Executive Director, Frances Crimmins, then officially opened the event, and discussed the variations of leadership that shape and subvert society to progress positive change. Yen then welcomed Director of Sport, Strategic Engagement at University of Canberra, Adjunct Professor, Carrie Graf AM, who delivered a short speech highlighting the partnership between University of Canberra and the She Leads program.

Carrie outlined the strong value alignment University of Canberra and YWCA Canberra share, discussing that both organisation are WGEA certified, and share a vision of women’s empowerment. Through this, University of Canberra provides flexible working and studying options for students and staff, is friendly breastfeeding certified, provides outreach for gender rebalance in STEM, and has commitment from top-level executives for gender equality policies and services.

Yen then invited Jax Jacki Brown to the front, to begin the in-conversation. Yen began the conversation by asking Jax what it means to work at and write from the intersections of disability and queer identities. 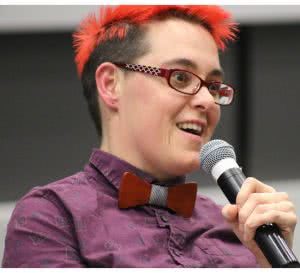 Jax responded, saying “for me, intersectionality should be a political term. We should be using it in the way Kimberley Crenshaw used it to discuss society and oppression, and not allow it to just be a marker for diversity.”

Jax went on to discuss societal interpretations and beliefs around disability, arguing that they were different to those of queer and LGBTIQ rights. Jax said that while there is a large push in current society to consider queer rights and experiences, disability is a frontier not yet explored.

“We still see disability as a problem of the body or mind, and not necessarily of an experience that is shaped by spaces and places and which effects employment and relationships, and all those sorts of things.” It is for this reason that Jax chooses to work at the intersects of her identities and works to “bring light to these ideas that people may not have thought of before.”

Yen then went on to ask Jax What is more influential in her life – her queer identity or her disability identity. Jax said that she cannot separate those identities, and to even imagine what she would be like if she were only queer or only gay was impossible. “Those identities, those parts of myself, they are inseparable.”

Jax then talked about how her disabled and queer identity can, at times, be at odds with each other due to the way society treats disability.

“One experience that I perpetually face is queer spaces being inaccessible. You know, queer parties in a dark room with stair cases lock us out. And in one way it makes sense, because we have had to hide away from society… But what that results in is queer disabled people are locked out, and can’t be in the room for a pash, to enjoy the party. Because of this, people aren’t used to imagining disabled people as lovers or as queer.”

Jax went on to explain that within the queer community, people with disabilities aren’t viewed as sexual beings, even if they adopt physical signifiers. “I have all of these physical markers, I’ve got the hair, I’ve got the bow tie, and yet people are still often surprised that I’m gay.” 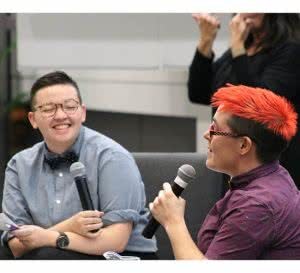 Jax continued, “wearing my sexuality and signalling it is important to me.” She then discussed that regardless of how hard disabled gay people flag their sexuality and interest in a partner, their sexuality isn’t taken seriously and they aren’t viewed as sexual beings. And the reason they aren’t viewed as such, is tied to both social conditioning that views people with disabilities as less-than, and built environments that lock queer disabled people out of queer spaces.

The social model of disability “explains that disability is actually about a person who has an impairment, and alongside that, is all the barriers that people face that make up their disability, as opposed to their impairment. So, my disability is all the barriers put alongside my impairment, like the built environment that locks me out of spaces and places, the job market, and people’s attitudes – especially those ideas that disabled people are vulnerable, or conversely, that they are inspirational.”

It was the social model of disability, Jax explained, that enabled her to work through who she was and work through the shame she felt about her body, and eventually, allowed her to learn to love and find pride in her body and herself.

The conversation then shifted to the intersectional experience of disabled and queer parenting, the IVF experience, and medically-expected screenings for disabilities during pregnancy.

“The queer experience of IVF is prohibitive. There is no gender-neutral language – you can either be birth mother, father, or non-birth mother. Why can’t you just be ‘parent’?” Jax continued, stating that the information slides and pamphlets for IVF are all hetronormative, displaying images and comments that suggest only straight couples are capable of parenting. 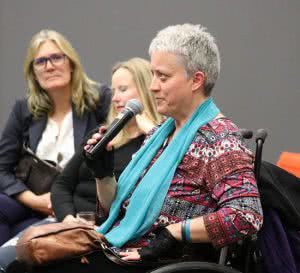 Jax also discussed the prohibitive nature of IVF for lesbian couples. For example, to access a medicare rebate for IVF, all couples must be able to demonstrate there is a medical reason to undergo IVF. “In Australia you can get the medicare rebate after just one year of trying, but queer people have to wait longer.”

Such a societal mentality, Jax said, is “screening out diversity and assuming that the most terrible thing is that somebody’s body is different, without considering at all the broader societal aspects. This is a form of eugenics.” Jax continued that it’s not just screening for disabilities that is a problem, but also the screening for intersex diversity, which is subjected to similar vitriol as disabilities. “It’s very worrying and I’m hoping to do more activism around this because it’s not something that’s spoken about.”

Jax concluded the discussion on pregnancy and screening, saying “disability is always going to occur in the world as society changes and our ideas of disability changes, and also, impairments will continue as people get injured in life and develop an impairment.

“I guess it seems almost inevitable that disabled people are going to become less as we screen, because of course we should be screening and terminating, and yet we aren’t having those conversations, and if we don’t have the conversations how can anything change?” 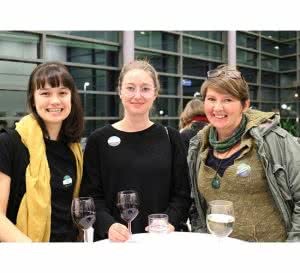 However, Jax also offered a feminist approach to pregnancy screenings. “It’s hard to have that discussion with feminism, because it’s always the woman’s choice to choose, and it’s usually the woman’s responsibility to look after children. Children with an impairment is, more often than not, going to fall on to the woman too. And the access to supports she might have are defined by society and are often lacking.

“It’s a hard conversation to have, but if I’m being courageous and acting in intersectionality, it’s a conversation I must have.”

Jax concluded by talking about change. “When I get invited to speak at events like this, I feel like we are part of something and that we are doing really, really good work. And if I shift one person’s mind about disability and stereotyping – and we can underestimate the power of that shift – then I know we are working towards positive change.”