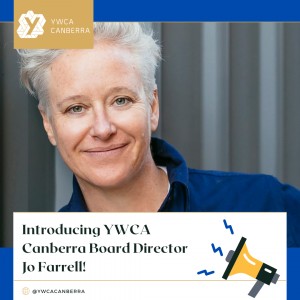 It’s been just over a week since we announced our newly appointed and re-elected YWCA Canberra board directors. This year we received a number of outstanding applications from highly qualified and empowering women. Today we are excited to introduce you to one of our newest Directors, Jo Farrell!

Jo has been in the construction industry for 24 years, starting as an apprentice carpenter, and is now the General Manager of Kane Constructions ACT. She has worked across the eastern seaboard on airport runways, schools, hospitals and defence projects and notably spent three years in Lithuania working on a Nuclear Decommissioning Facility and learning Russian.

She is vocal and passionate about seeing more tradeswomen in the industry, founded her own Not-For-Profit called Build Like A Girl in 2020, and works with Government bodies and industry to implement pathway programs for apprenticeships.

Her aim is to achieve greater equality for women in the building industry, as well as in our community and society in general.

What drew you to contributing your skills on the Y Board?

I was drawn to nominate for the YWCA Canberra board after attending the 2021 She Leads Conference, and being inspired by the speakers, panellists, sponsors and members of the YWCA Canberra community. I felt an energy and passion from multiple industries and sectors come together to discuss the importance of championing women’s rights and accessibility in our community. Having been on a construction industry-based board, I felt that I was not able to contribute as much as I would have liked to, and that the needs of the broader community for women were not being met. After experiencing firsthand the commitment of the Y, I knew that this was a space where real change can happen.

What is one of the biggest strengths you see in the Canberra community, that makes you proud to be part of it?

I first moved to Canberra in late 2013, after living overseas for three years and travelling for 12 months. Previously, I had grown up in Wollongong and worked in Sydney for a decade. Canberra is a mercurial place, that can often seem cold to outsiders initially. What I have now realised, and experienced is that Canberra has one of the most generous and community minded concentration of people, all focussed on giving back and creating a better place for all people, regardless of where they have come from or who they are. I have been involved with various charities and fundraisers and am always in awe of the generosity and selflessness on display by Canberra locals. If you ask for help, it will always arrive.

What’s a favourite book or film that you think showcases the strength of women?

I am an avid reader and loved Hidden Figures, as well as the movie. I also love a good action flick that doesn’t involve the woman being saved by a man, so Captain Marvel, Erin Brockovich, Wild Rose, A League of Their Own, Wild, and anything with Sigourney Weaver or Meryl Streep is always on the list. I also admire Brene Brown, Annabel Crabb, Clementine Ford and Margaret Atwood as writers (both fiction and nonfiction).

Applications for the Board Traineeship Program open in September each year, and you must be a YWCA Canberra member to apply. Subscribe to our ENewsletter to find out first when applications open.

Think a Board Trainee Program would be good in your workplace? See our Bringing on Board guide available for download here.