It’s time to step up to close the gap 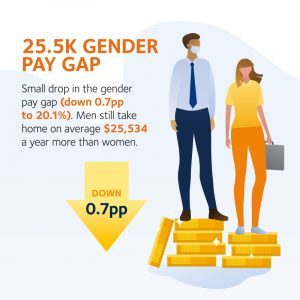 Progress in closing the gender pay gap remains glacial, with a 0.7 per cent reduction from 20.8 per cent to 20.1 per cent and some marginal improvements in levels of women in management. Men still take home, on average, more than $25,000 a year than their woman counterparts. Even if we look at the salary gap (based on full-time base salaries), the gap is still 15 per cent, or over $15,000 a year.

On a positive note, however, this year’s gender gap analysis has revealed that access to flexible work and paid parental leave for employees has increased. For the first time since we started collecting data, over 50 per cent of employers now offer paid parental leave to their staff on top of the Government entitlement. There was also an increase in paid leave being taken by secondary carers to 46.4 per cent of reporting employers. YWCA Canberra has been a longstanding advocate of equitable access to parenting leave as a strategy to closing the gender pay gap, and we welcome progress in leave entitlements for all parents and carers.

It is also worth noting that the number of employers analysing their data and reporting to the Workplace Gender Equality Agency continues to increase and this year saw 46.4 per cent of organisations conduct an analysis.

Yet there remains work to be done. WGEA found that only half (54.4 per cent) of the organisations that undertook a gender pay gap analysis then took any actions to help close the gap. Actions can include recruitment and talent identification strategies as well as succession and retention planning. This has dropped by six per cent since last year’s data.

The WGEA data also found that businesses are not committing to engaging men in flexible work, with only 2.2 per cent having set a target for this important method of improving gender equality.

Although the gap is usually somewhat lower in the ACT because of the influence of public service enterprise agreements, data just released by the Australian Public Service Commission shows there is still a gender pay gap within the APS of 7.3 per cent, which has only reduced marginally from 9.1 per cent over the last five years. This is still a $7,000 a year difference, in a workforce that is more than 60 per cent women.

This is not good enough. All employers need to explore the factors leading to gender pay gaps within their organisation and take concrete and measurable actions to close that gap. They cannot become complacent about gender equality or consider a purely performative analysis project sufficient. 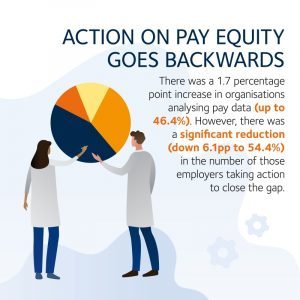 As I have been saying for months now, the COVID-19 crisis poses a real threat to women’s workforce participation and long-term financial sustainability. We have seen the disproportionate impact on women already and that will likely continue over the coming years. We need action.

The Equal Remuneration Order, handed down by the Fair Work Commission in 2012 following years of lobbying and advocacy by the Australian Services Union and workers across the sector, lifted the wages of the feminised and underpaid social, community and disability sector. This was a monumental step in closing the pay gap and recognised structural devaluing of feminised industries. This week, the final pay increase connected to the ERO order was made to workers under the SCHADS award. However, the mission for equal pay remains.

As CEO of a children’s services provider, I fully support the Big Steps for Early Learning equal pay campaign. COVID-19 has highlighted how essential children’s services were in facilitating both a grinding pandemic economy and the full post-COVID economic recovery.

Lifting the wages of the highly feminised early learning sector remains the single greatest step we can take towards closing the gender pay gap. Through our advocacy work, YWCA Canberra continues to lobby the Australian Government and the ACT Government in addressing this much-needed reform.

But this is not just a government issue. For systemic change to occur, more organisations need to take action.

Every employer in Australia has a responsibility to step up to close the gap.