Jamila Rizvi is the quintessential high achiever. The writer and public commentator was recently announced as the editor-at-large of Nine’s new subscription women’s platform, Future Women. Rizvi also has a News Limited column, is a bestselling author, and runs an event series, Tea with Jam and Clare, with bestie Clare Bowditch. Before this, she was a Chief of Staff in the Rudd and Gillard governments and the Editor in Chief of the Mamamia Women’s Network. 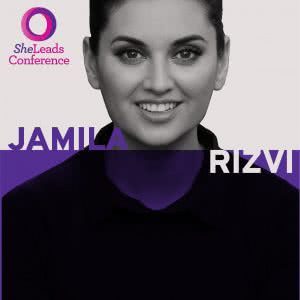 So, when Rizvi was forced to “lean out” because of health problems and take three months off work, the “achievement driven” freelancer admits she struggled.

“I’ve needed to take my foot off the pedal a little bit. Although my husband’s described it as I’ve pulled back from 150 per cent to 110 per cent!”

For Rizvi, who jokes she is so shamelessly competitive that no-one likes playing Monopoly with her, learning to say no to opportunities was difficult.

“It is definitely a work in progress, [particularly] for a personality like mine who not only really needs to be working for fulfilment, but genuinely loves the work they do … The desire to pull back is even weaker, because it’s really enjoyable.

“I’m trying to keep myself mindful of both my family and my health and recognise that for the moment, I probably can’t be doing everything I want to be. But I suspect it’s only temporary.”

Jamila is a keynote speaker at the upcoming She Leads conference, and the event’s theme of ‘Rise: We grow powerful by lifting each other’ is a recurring topic in her two books: the bestselling Not Just Lucky, a career manifesto for millennial women, and The Motherhood, a collection of essays on new motherhood that Rizvi edited.

“I have been really fortunate in my life in that I have had some women really work hard in the workplace to give me opportunities that I wouldn’t have had otherwise, and I take really seriously the obligation to pay that forward as much as I can. I am a referee for more intelligent, outstanding young women than I can count.”

Rizvi says she’s in touch with almost everyone from her former 45 women team at Mamamia, and acts as a mentor to many of them.

“I’d like to think that if they were having a problem at work or if there was a challenge, they’d never hesitate to pick up the phone. And judging by the amount of time we’ve spent on the phone together, that is very much the case!”

The idea for The Motherhood came from Rizvi’s desire to create a different kind of baby book that she wishes she had when her son Rafi was born: one that focused on the postpartum needs of the mother, rather than the child.

“We need to look at how we can better support women during that transition.  I think one of the ways we can do that is by sharing our stories and being honest about the hard bits and the bits that can be utterly heartbreaking, as well as the joys and the humour that come with new motherhood.”

She’s a strong advocate for women investing in their professional development, saying it’s something she “shamelessly prioritises”, because as a freelancer, contacts and networks are essential to success.

“So much about work life is strategic and planned, but there is also a really significant element that is accident and chance. And more of those happy accidents happen when you take the time to do that networking and professional development work.”

In the future, she is determined to have a second child and says her media work will “continue [her] focus on Australian women and women’s issues”. Another stint in politics is also a possibility, with Rizvi describing it as a “first love” that she would consider returning to under the right circumstances.

If you want to hear more from Jamila Rizvi, and grab a signed copy of her books, The Motherhood and Not Just Lucky, register to attend the She Leads Conference 1 August at Rex Hotel Canberra here.