Leadership, positivity, and feminism 101 at the inaugural She Leads High Conference

The inaugural She Leads High Conference was a one-day leadership event for young women, including female and non-binary people, in years 9 and 10. The event engaged young women with concepts of leadership, confidence, developing positive relationships, and provided a safe space to discuss school, careers, body image, language, and sexuality and gender.

On Tuesday 28 November, more than 90 young women from 12 ACT and Canberra-region schools came together at the University of Canberra’s Ann Harding Conference Centre to gain an understanding of the fundamentals of leadership, and learn to how to become leaders in their homes, schools, friendship groups, and communities today. 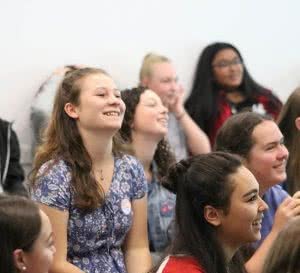 The day started with a warm and inspiring Welcome to Country by Ngunnawal Elder Aunty Violet. Aunty Violet encouraged us to pursue our future dreams, regardless of gender stereotypes, to remain fearless in our future quests, and to consider that any of us may be the future Prime Minister of Australia.

Our Emcee, Laura Campbell, then officially opened the day with her signature comedy style and bubbly personality. She explained that her walking stick, was the result of a recent hip operation, and the auto-immune disease that she lives with, Lupus.

Laura went on to discuss the idea of social scripts, and how these can be both positive and negative. Positive scripts include how to talk on the phone, write an email, be professional, and share with others, while negative social scripts tell us that ‘boys will be boys’, women who wear short skirts are ‘skanks’, and women who lead are ‘bossy’.

We can ignore these social scripts, but Laura encouraged us to instead flip the script. Flipping the script involves asking ourselves if the script we are using is hurtful to the subject, if so then we need to see if there is another approach we could take. If the script does need to be flipped, Laura encouraged us to change our actions – even if this means being the first to do so – urging us to be fearless and “speak up and speak out because change starts with you!”

Next, Francesca Maclean gave the first keynote of the day, citing the importance of understanding when to cede failure and when to try again. Francesca outlined her biggest failure: being kicked out of a prestigious STEM class at university because her grades were slipping, and how she overcame this set back.

Francesca stated that being a woman in STEM was also a challenge, where she was constantly juggling and pushing against the possibility of failure due to ingrained and harmful gender stereotypes. She stated that for some time, she tried to overcome and work around the stereotypes, but struggled to make any meaningful ground. So, instead she now dedicates her life to increasing diversity within STEM to change and improve the whole industry. 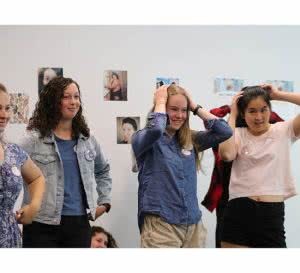 We were introduced to the concept of couching, and discussed how to avoid common diminutive sentences such as ‘I just wanted to ask…’ and ‘um, maybe we could try…’ Instead, we looked at what assertive language is and how to use it, with Rosanna advising “most things you want in life are reasonable, so just ask for them.”

In the Positive Identities workshop, hosted by the YWCA Canberra Youth Engagement Team and facilitated by Ciára Duggan and Annie-Lea Rowley, we were exposed to a variety of topics, including respectful relationships, positive and affirmative identities, recognising and overcoming peer pressure, and body positivity.

This workshop involved many fun and lively activities and facilitated discussions around social media, self-esteem, respect and body image, with one young woman commenting, “We can use social media to our advantage – engage with people who make you feel empowered. It’s important to remember we are so much more than what we look like.”

Next up was second keynote, Nipuni (Nip) Wijewickrema. Nip discussed her experience starting social enterprise GG’s Flowers, and the motivation behind it. GG’s Flowers was not started for profit, but instead to provide an employment opportunity and career pathway for Nip’s younger sister, Gayana, who lives with Down syndrome.

We were all heartened to hear that at just 20, Nip co-founded GG’s Flowers, and that the business continues to grow and grow, now providing employment opportunities to many Canberrans living with disabilities. Nip encouraged us to all “start today”, and reminded us that age doesn’t matter when it comes to changing the world. 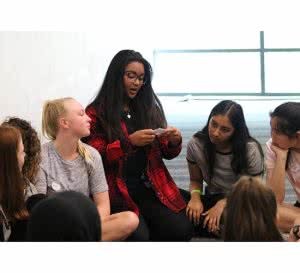 After Nip’s keynote, came the speed networking sessions, where we were split into groups of 10 and rotated around the room, spending 10 minutes talking with and learning from seven leading young women in the Canberra community.

We had the opportunity to hear from Julia Faragher, Co-Founder of Skybound Productions; Moira Cully, 2014 Young Environmentalist of the Year and UnionsACT Campaign Organiser; Sam Launt, recipient of the 2015 Tillyard Prize, a PhD candidate investigating diversity in STEM, and founder of Engage; Holly Vanderpol, a cultural anthropology student and volunteer for MIEACT, NCWA ACT, and ACT Multicultural Advisory Council; Sophie Hope, 2015 Volunteer of the Year, 2016 Finalist for ACT Young Australian of the Year, and volunteer for Headspace, the ACT Youth Advisory Council, and the Youth Coalition; Ether Suh, and experienced Flight Lieutenant and DFR representative, and Ciára Duggan, YWCA Canberra Youth Programs Team Leader.

After a lunch break, we came back together to hear from the final keynote of the day, LGBTIQ activist Isabel (Izzy) Mudford. Izzy discussed sex, gender, and sexuality, highlighting the many differences between these categories, and stressed that biology, gender, expression, and sexual attraction are as unique as every individual. We were all encouraged to not only accept the diversity within everyone, but to actively embrace and support it.

Izzy also introduced us to intersectional feminism, explaining that through an intersectional lens, each person can learn to be kinder and more respectful by understanding the different privileges and opportunities available to everyone. By taking into consideration a person’s gender, sexuality, ethnicity, age, ability, religion, education, class, and economic status, we can actively include and respect everyone, and learn to work and act in solidarity. 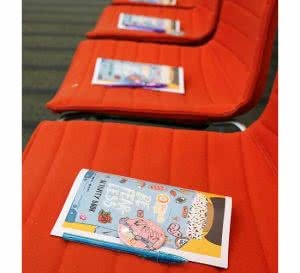 Many of us were inspired to begin leading change in our communities immediately, with three of us stating that we realise we’re not too young to begin today. We also reflected that She Leads High Conference had created a safe space, which made us feel comfortable to express ourselves as we were surrounded by a group of like-minded and open and warm women.

We are very grateful for our Principal Partner, Defence Force Recruiting, and the ACT Government’s 2016-17 Women’s Grant Program to help make this event possible. We would also like to thank workshop partner Stella Schools, and Capital Giving and Holly Vanderpol for donating scholarships to ensure this event was accessible to all.

The next She Leads High Conference will be held on Thursday 1 November 2018.