Leadership, resilience and the progress of gender equality with Virginia Haussegger at the She Leads In-Conversation

Sarah is the Communications & Policy Intern at YWCA Canberra

On Wednesday 22 November, we featured Virginia Haussegger AM and Jane Alver, and enjoyed a robust conversation about leadership, career progression, resilience, and the tide that is slowly turning towards true progress on gender equality around the world. 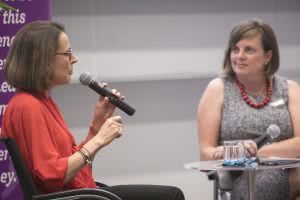 Ms Alver opened the event, delivering an acknowledgement of Country and thanking Ms Haussegger for attending. She described Ms Haussegger as a ‘thought leader’, and a passionate women’s advocate who leads by example. Ms Alver also explained that Ms Haussegger is her boss (at the University of Canberra’s 50/50 by 2020 Foundation), and said she felt very grateful for their collegial relationship, and the opportunity to come together for a “casual chat”.

Ms Alver began by asking Ms Haussegger about her career path, and whether she had ever had any specific plans to take herself in any particular direction. Ms Haussegger said she makes a point to avoid saying “I’ve just been lucky”, because this statement negates her years of hard work.

Ms Haussegger went on to explain that she came from a family of talkers, who were all very generous and community-loving people. She described her experience as a 16 year old travelling to Mexico on a student exchange program, where the loneliness that stemmed from the fact that she was away from home and couldn’t speak Spanish led her to focus on keeping a detailed journal. She said looking back, this experience was the foundation for her drive to pursue a career in journalism.

On career plans, Ms Haussegger said “I’ve always been ambitions, bold and hungry for interesting work.” She continued, explaining that in current affairs, you have to be ambitious to survive. She noted that she’d never understood why people labeled her “fiery, quick tempered and ambitious” as a criticism, explaining that she perceived these traits as essential and constructive herself. She summarised her thoughts by expressing her resentment about ambition being seen as a gendered concept, saying “it really pisses me off when people say that women have less ambition than men”.

Ms Alver then steered the conversation towards resilience in the face of criticism more generally, and asked Ms Haussegger if she had any particular coping mechanisms in the face of adversity. “Naivety certainly helps”, said Ms Haussegger, adding that sometimes she just truly doesn’t care about what critics have to say – “Part of television training teaches you to wear a persona, and you get used to copping flack. Perhaps that sounds arrogant, but perhaps that in itself is an effective method of protection” she said.

On failure, Ms Haussegger described her experience being publically sacked from Channel 7; her first real sense of failure. She said her father’s advice really helped her though this period, where she felt overwhelmingly embarrassed, and just wanted to become a recluse.
“In a few years, Virginia, people won’t remember that you were sacked, but they will remember how you carried yourself, and what you did next” said her father at the time. Ms Haussegger said that this lesson about making the choice to pick yourself up and carry on has resonated with her ever since. 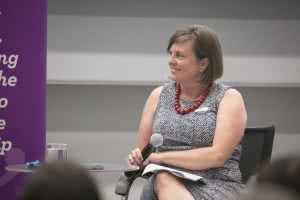 On receiving her Order of Australia award (AM), Ms Haussegger said it was the proudest, most humbling and most career-changing moment of her life. She said she didn’t understand the power of it when it was happening, she felt very honored during the ceremony, and certainly didn’t realise the power and the access that it would afford her in years to come. “It’s a door opener, and I feel a big responsibility to use my voice to give access to other women. I feel an enormous obligation to work harder, and (the award has given me) the drive to push harder.”

Finally, on the progress of gender equality, Ms Haussegger said she was born a fierce feminist, and has spent her whole life unimpressed about the remarkably slow rate of positive change both in Australia, and across the world. Here in 2017, Ms Haussegger said we have all the legislative framework in place, but attitudinal bias, sexism and stereotyping remains our biggest hurdle.

“(In order to make further progress) it will have to get nasty”, she said. “We are already experiencing backlash, and our representation of women in the media in particular has gone so far backwards” she said.

Ms Haussegger concluded by urging everybody to “ask for more”, in our workplaces, families and within our own relationships, and said it is vital that every woman speaks up and shares their story. “We should be asking for more for ourselves, and we should expect to get it”, she said. 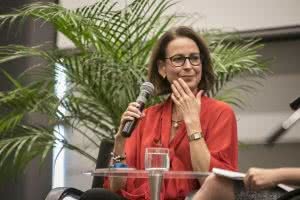 Join us for the next She Leads In-Conversation event on Tuesday 13 February from 6:15 – 8:15pm with Nayuka Gorrie, a Kurnai, Gunditjmara, Wiradjuri and Yorta Yorta woman. Nayuka is a passionate advocate for Indigenous rights and self-determination, and the rights of women.