On Wednesday 7 March, we partnered with Griffin Legal to host our 2018 International Women’s Day event at the Theo Notaras Multicultural Centre, where we launched our Leading the Change: The Pathway to Gender Equality Report Card with more than 70 leaders from across the community, business and government sectors. 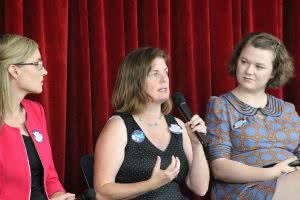 Our event kicked off with Ngunnawal Elder, Aunty Violet Sheridan who delivered a Welcome to Country, followed by a brief address.

YWCA Canberra Executive Director Frances Crimmins gave a powerful welcoming speech, acknowledging that International Women’s Day can be a day of mixed feelings for many people, saying that “[a]t best, it’s a day to celebrate the achievements of women in all spheres of life…but it also highlights the persistent and ingrained nature of gender inequality – such as the pay gap – that doesn’t change from one International Women’s Day to the next.”

Frances then launched YWCA Canberra’s report card, Leading the Change: The Pathway to Gender Equality, explaining that she felt ready to embrace the International Women’s Day theme for this year, ‘Press for Progress’.

The Lead the Change report card assesses the progress of the ACT Government’s gender equality agenda, and specifically their efforts to target primary prevention initiatives to tackle violence against women, and the importance of specialised women’s services. It also provides a number of policy recommendations, designed to support the ACT Government to ensure progress is made in these critical areas.

In launching the Report Card, Frances commended the ACT Government for positive progress, such as the development of the new Family Safety Hub and Early Childhood Education Strategy as well as the passing of legislation that criminalises the sharing of intimate text images without consent.

We then from Griffin Legal’s Managing Partner, Claire Carton, whose keynote provided an insight into her upbringing, which saw her and her 11 siblings raised with positive messages about non traditional gender roles. Claire explained how she grew up to discover that many people believe it simply isn’t possible for women to have a successful career and be a mother at the same time. She described the systemic discrimination she and other young female solicitors experienced early on in their careers, with employers telling them “not to expect to have an office” after coming back from maternity leave, and the immense difficulty they experienced up against an “antiquated”, intolerant and inflexible workplace culture. 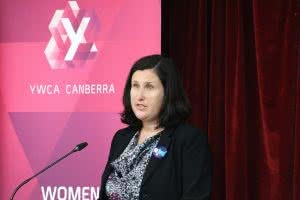 It was at this point that Claire met Peter McGrath, her current business partner, and together they worked establish Griffin Legal, where flexibility and family values are core to the practice. Claire also reflected on how gender stereotypes continue to impact on her career, including dealing with clients who assume she isn’t as capable as a female lawyer, and feeling overlooked, undervalued and a sense that she doesn’t quite ‘belong’.

Claire urged us to continue to challenge assumptions and negative stereotypes in our homes and workplaces. “Achieving equality doesn’t equal asking women for more; it means letting men do more, and being mindful not to sideline them in these matters. This ‘male breadwinner’ model punishes women, and reinforces negative stereotypes”, she said.

We were then treated to a robust panel discussion on ‘the journey to gender equality’, featuring three outstanding and accomplished women leaders; Jane Alver, Institute for Governance and Policy Analysis, University of Canberra, Dr Skye Saunders, Associate Professor ANU College of Law and YWCA Canberra Board Vice President, and Codie Bell, local Canberra activist and comedianEach woman shared their personal and professional leadership stories, as well as their insights into what needs to be done to see gender equality truly progress in our workplaces and communities.

To begin, Jane spoke about her experience studying feminism in a number of NGOs across the pacific, and called on Australian feminists to support the diverse voices of Pacific women. “Pacific states have lowest number of women in Parliament and highest rate of sexual violence in the world… [However], diverse and intersectional recognition of women’s experiences is on the rise in the Pacific”, she said.

Skye spoke about her research conducted in rural and remote Australia, where she spoke with dozens of women across the country about their experiences with toxic masculinity, sexism, and sexual harassment and violence, in male dominated industries. As a result of this work, Skye said she feels inspired by women who are courageous enough to have the difficult conversations that are necessary to catalyse positive change. “It’s important that we help men to consider how certain interactions can affect women, and men need to take responsibility for calling each other out for unacceptable behaviours, rather than simply being bystanders”, she said.

Adding to the discussion about toxic masculinity, Codie spoke about her personal experience as a victim of intimate partner violence, and said she believes it’s crucial that we develop a culture of accountability for perpetrators of sexual violence, and encouraged us all to find the courage to speak up for what is and is not acceptable. “I don’t mind if people don’t like me, and I’m not afraid to say ‘don’t say that to me!’. We all have a role to play in achieving gender equality”, she said.

The highlights of this insightful discussion are available via Twitter, and an album of photos from the event can be found via Flickr. You can download a copy of our report card via our website andstay updated our upcoming events by subscribing to our weekly ENews.

Ahead of the release of our extended Leading the Change report later this year, you can find out more about our advocacy subscribing to our YAction publication, and share your vision for gender equality via Twitterusing the hashtag #leadingthechange.