Making choices for me 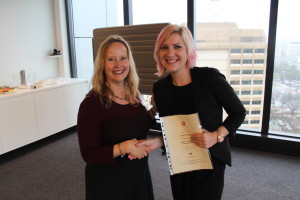 Keah Woodgate delivered this speech on Tuesday 16 June 2015 as part of the She Leads Diploma of Management graduating class.

I decided to take the Diploma of Management in 2014, when I attended YWCA Canberra’s She Leads Conference. I went by myself (one of the first solo life-changing decisions I’ve made in the past few years), and nervously sat alone amid the twitter of ladies in the big hotel convention room.

The first thing I noticed was the sound. With only about three men in the room, and hundreds of women, it was noticeable how different the pre-conference chatter sounded. It was pretty, melodical, and put me at ease, calming my solo-flight nerves. It was then that I realised I’ve never been in a room with so many women, but more notably, so few men.

This was truly my first step into feminism. Before that, my only understanding was really of the smelly hippies that are ridiculed on American telly, or the loud, antagonistic, man-hating comments I heard from the few gender studies majors I met at uni.

She Leads showed me another option. It introduced me to women I could connect with, women I could aspire to be, who loved doing what they do as well as being women, not necessarily despite being one.

Things just got better from there. We had a panel, and the floor was opened to questions. A member of the audience asked a toughie, and do you know how the crowd responded? They clapped! No one eye-rolled, no one told her to put her pointed question back in its box. The crowd supported her on her journey of empowerment and leadership by asking that difficult question.

That’s when I knew. I was signing up to this new movement of women’s leadership. I was starting my journey of making choices for me and for my fellow leading ladies, because they were going to support me as much as I support them. We’re in it together, and the world’s just waiting for us to collaboratively bring it to greatness.

I tweeted my first tweet that day: “The empathy and compassion in this room is blowing me away. So privileged to be in this room.”

I signed up for the Diploma of Management. Over the last year (or just shy of), I’ve taken a lot away from tips on communication, project management, finance, and a wealth of other valuable content.

What this course has really taught me is about courage. It has taught me to have the courage to say that my age, my gender, and how I choose to live my life don’t stand in the way of my contributions being meaningful. It gave me courage to say that my job in the corporate sector didn’t align with my values, and gave me the strength to say that I deserved something more. It gave me courage to take a risk in yet another new job, which will soon see me managing others for the first time. That was even after I questioned my managers about the difference in pay they had put on my job offer, which was a few grand less than what they had told me in the interview. I would never have had the guts to question my new boss about that in the past, but this is living proof that standing up for myself, and believing that others believe in my value too, has gotten me somewhere.

I’ve met amazing people – our facilitators, our panellists, people achieving big beautiful dreams, and people living lives they see as contributing, succeeding, and really living. I’m addicted to what I think has really helped me grow: this environment we’ve been in. I even joined an all-women’s running club as just another excuse to immerse myself in this nurturing, empowering space, and look, I’ve got two completed triathlons out of it!

But it’s really been the other members of the course that have impacted me. Watching others grow with me, knowing they’re questioning the same things I am, hearing them tell about overcoming their own hurdles (both society’s and their own), is what’s truly left a mark.

I think that there is so much we have all gotten out of this course, and it will keep shaping our lives in ways we won’t even realise until hindsight gives us that glimpse down the track. But for now, lets just say congratulations to everyone that’s graduating today, we did it! We deserve it! We had the strength to challenge ourselves, and prove that we have something to offer. I wrote a quote from Virginia Haussegger down at that She Leads Conference. She said, “What happened to you doesn’t matter. What people will remember is how you get up, what you do next.” So good luck to everyone, can’t wait to see where you’re all headed next, and I wonder which of us will leave our mark on that She Leads Conference panel sometime in the future.