#March4Justice – More of the same or a real tipping point? 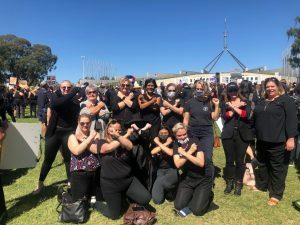 As long-time observers and participants of women’s political advocacy and outrage, many of us have seen expressions like ‘momentous’ or ‘tipping point’ used to characterise a moment that we believed would be the impetus required to change the course of women’s lives for the better. These labels have often followed events that fall on either the outrage or inspiration ends of the feminist spectrum.

On the outrage end, we have the random murders of Eurydice Dixon and Jill Meagher as they walked home, stalked by men who were not known to them, and that of Hannah Clarke and her children, killed by a man who should have been their protector.  And conversely, on the inspiration end we have Julia Gillard’s misogyny speech calling out years of sexist slurs and the hypocrisy of the Johnny-come-lately brand of feminist ally of the then Opposition Leader which was more politically expedient than it was genuine.

But while the misogyny speech has become a rallying cry for the educated middle-class women who recite it verbatim, its suburban reach, if it ever existed, has diminished and it remains mostly forgotten by women locked in cycles of bills, rent and school runs. And, while the murders of Eurydice, Jill and Hannah got politicians to make impassioned speeches (also here and here) and drew many of us out to a night-time vigil, huddled masses of women galvanised by a sense of visceral outrage, their names fade into our memories as more and more women suffer their fate and we return to the speeches, the vigils and the forgetting, a cycle that repeats ad infinitum.

This cycle is perhaps why so much of the commentary from the #March4Justice protestors included ‘tired’, ‘bored with the debate’ and ‘exhausted’ because for many they have a lifetime of this cycle. From the schoolyard to the office, to the home they have experienced or been witness to violence, harassment and then endured the scepticism and empty promises of change. Some first took their outrage to the street decades ago, thinking that things would be different by the time their granddaughters were born. And while the white-hot anger of the older generation of feminists may have receded, as the mantel transitioned to younger women for whom life was meant to be better, it has never cooled.

How did we get here? 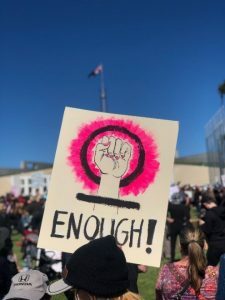 When Brittany Higgins came forward alleging she had been raped in a Ministerial office, it coincided with the 12-month anniversary of the release of the Australian Human Rights Commission report into workplace sexism. Respect@Work surveyed more than 10,000 Australians on their experiences with workplace sexual harassment. It also consulted with industry, the women’s sector, legal groups, academics, government, trade unions and victims to deliver to the government a comprehensive review of the operation and limitations of the Sex Discrimination Act (1984) and the prevalence of workplace sexual harassment along with legislative, education and administrative options for reform. At the time of its release the 55 recommendations of the report were welcomed by some as ‘revolutionary’, but were eventually shelved.

If it weren’t for the confluence of both Brittany Higgins’ disclosure, and allegations of ‘grooming’ by senior staff in a political office and historic rape by a man who is now the Commonwealth Attorney-General, it’s fair to assume that Respect@Work would have continued gathering dust. Its destiny would have been to be read only by those whose government jobs demanded it of them and women’s advocacy groups who add their names to the ‘tired’ and, ‘exhausted’ only this time they are tired with yet another landmark inquiry, relevant to women’s lives, going nowhere and changing nothing.

What makes the #March4Justice potentially unique in catalysing systemic change is the convergence of all these realities and, significantly, that it is not just the educated, time-rich women of the middle-class agitating for change. The Canberra rally was a melting pot of women whose lives and careers, and those of their friends and family, could have been different were it not for violence. In capital cities and regions, women, children, and men turned out and Canberra’s rally of thousands was juxtaposed by those in rural towns like Talbot where 50 people from a population of 400 turned out. The penny has finally dropped and the political bubble has realised that #March4Justice is actually resonating with women of suburbia.

So where to now?

The #March4Justice protest had very specific demands relating to the recommendations of Respect@Work report which now must be implemented and budgeted for by the Australian Government.  Better data, comprehensive primary prevention strategies and legislative reform were all captured by the recommendations and must be part of the national response.

#March4Justice also called for funding sustainability for the women’s sector. As the sector, in all its professional diversity, responds to the complex realities of violence in women’s lives every day, 0.03 per cent of the Budget is not going to cut it. And of course, the enactment of a federal Gender Equality Act that would include a gender-based audit of Parliamentary practices, appointments, and budgetary spending.  Those national corporations who were invited to sign onto the #March4Justice letter also need to step-up and be part of calling for change, after all if workplace inquiries are good enough for those who work outside the political class, they are good enough for those inside it.

But what is really needed, particularly for those women of suburbia whose alignment with the protest rattles government and for whom concepts of ‘law reform’ and ‘gender-informed’ may not have significance, is genuine behavioural change. Political leaders and representatives of all tribes have a unique role to play in this historic moment. How they talk about and treat survivors of violence, what steps they take to respond to women who make disclosures, whether they use their influence to commit to sector sustainability and what they do to make theirs and our workplaces safe will have consequences for how the broader population responds to and talks about gendered violence and that will be truly momentous.